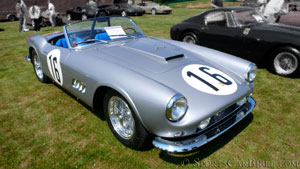 After the introduction of Ferrari’s first “mass produced” convertible, the 250 GT PF Cabriolet made between 1957 and 1962, the master coachbuilder Sergio Scaglietti was again asked to build a convertible using the race proven and stiffer, 1956 Ferrari 250 TDF chassis. 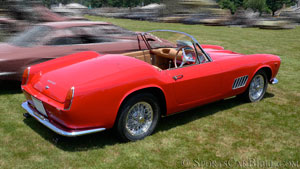 The wheelbase was 2600 mm (102.4 in) creating one of the most beautiful Ferraris ever produced and thus one of the sexiest sports cars ever made. This now legendary 1958 Ferrari is the 250 GT California Spyder LWB (Long WheelBase), named after the market that it was intended for. The idea behind this new convertible came from Jon Von Neumann and Luigi Chinetti. These two North American Ferrari importers convinced Enzo Ferrari that a niche market existed for a sportier and more exclusive convertible in the North American market. 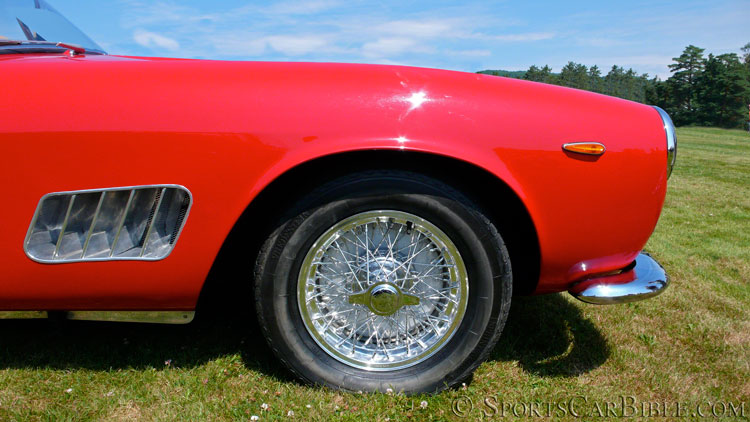 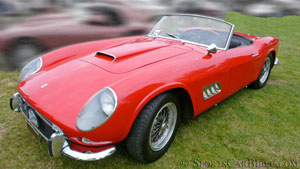 The design was inspired by Pinin Farina’s 1957 all hand built Ferrari 250 GT PF Cabriolet series I (visit file). This new stallion was produced with or without Plexiglas covered headlights, and the traditional egg-crate grill could adorn the optional extra driving lamps inserted at each side. A hood scoop swallowed cool air into the three twin-choke Weber carburetor set, and the front fender side air-vent openings were fitted with three slats on this Long WheelBase model. The windshield was as rakish as the first series 250 PF cabriolet, and it also had an ultra thin chrome frame around it without side window vents. 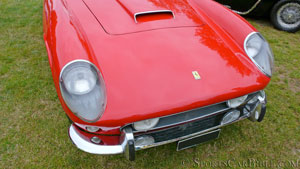 The rear fenders had a raised shoulder line and the rear taillights were vertically slanted as seen later on with the MGBs (not a Pinin design), Peugeot 404 Coupes and others of that era. The rear displayed the traditional four exhaust pipes, and to complete this late 50’s design, the California Spyder was fitted with Borrani wire wheels. Also offered was the optional and now very rare fiberglass hardtop. 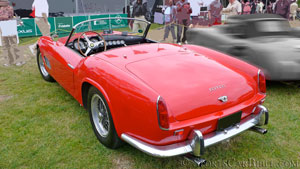 The engine was the 3 liter (180 cu in) V12 Colombo developing 240 hp at 7000 rpm with the help of three Weber carburetors. The engine was then matted to a four speed transmission, and higher specification camshafts could be ordered, boosting the power up to 280 hp.

The interior had two main Veglia dials behind a wooden Nardi steering wheel and a series of five smaller gauges were placed at the center of the dashboard with a rearview mirror planted just above them on the dash itself. 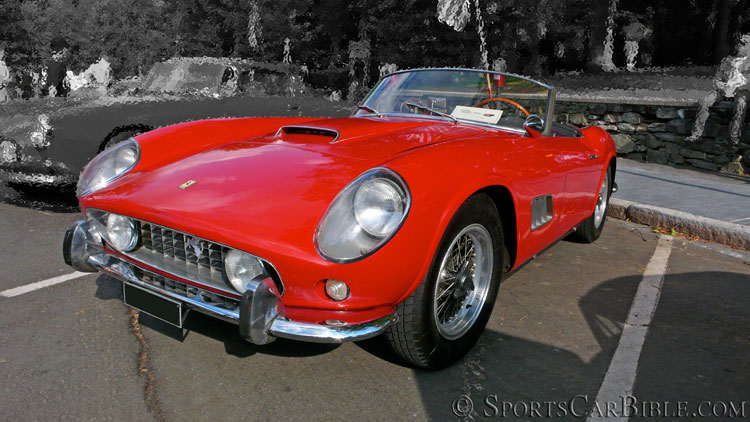 In 1960 the even more desirable Ferrari 250 GT California Spyder SWB (Short WheelBase) made its debut. This latest California Spyder was based on the shorter chassis also found on the iconic 250 GT SWB. This stiffer and more predictable 2400 mm (94.5 in) wheelbase chassis gave this new Scaglietti masterpiece a more compact and sportier look. 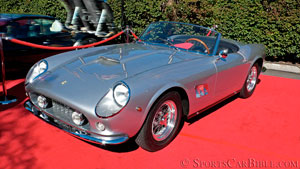 The front independent suspension had double wishbone and coil springs, while the rear had a live axle with spring leaves, same as the California Spyder LWB, but now front disc brakes replaced the drum units adding some more sportiness to the mix.

As with the LWB California, the SWB was available with or without covered headlights, and aside from an 8 in (20 cm) shorter chassis, the only distinct features between them came from the side front fender air vents now having two vertical slats instead of three, and from the recessed hood scoop instead of the flush LWB air scoop entry.

The interior’s two main Veglia dial pods received a rounder sun visor design, but aside from that the dashboard layout remained the same to the pleasure of many.

The SWB was nimbler and the better balanced car of the two. It also was the most harmonious to look at, especially in its covered headlights form. In 1963 the production of the magnificent Ferrari 250 GT California Spyder SWB ended with 125 Californias produced including 12 lightweight alloy racers, which contributed to the legend of one of the three most beautiful Ferraris ever produced.