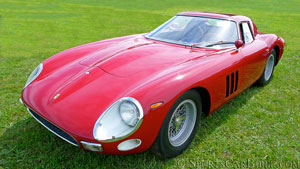 Myths and Legends are often read about in storybooks or told by Grandpa at night before bedtime. Most of these tales only exist in the imagination when you allow your mind to escape reality for just a brief period of time. This is a story of a real legend for a change, the 1962 Ferrari 250 GTO.

Born after PininFarina‘s greatest master piece, the dual purpose Grand Tourer and racer, Ferrari 250 GT SWB, the 250 GTO was an evolution of the SWB, but unlike the SWB the GTO’s only purpose was to go racing even if it still was a street legal sports car. The job of the Grand Tourer was then left to the 250 GT Lusso (Luxury) also introduced in 1962. Engineer Giotto Bizzarini was in charge of the project and worked with master coach builder Sergio Scaglietti to create an all out winner on the international race circuit. 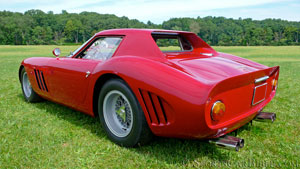 The chassis was the well proven 2400 mm (94.5 in) wheelbase unit lightened as much as possible with the same double wishbone front independent suspension with coil springs, tube shocks and anti roll bar. The rear still used a live axle with semi-elliptic leaf springs and tube shocks. The traditional Borrani wire wheel set was fitted to the GTO with Dunlop disc brakes all around. 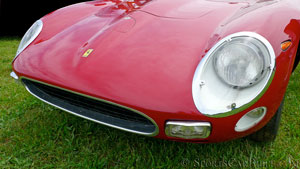 To enter the International GT racing class, Ferrari needed to homologate (Gran Turismo Omologato) 100 cars before the International Federation of the Automobile (FIA) accepted the GTO at any race entry. But Enzo convinced the FIA that the GTO was an evolution of the SWB, which it was to a certain extent, and was then able to produce only 36 GTOs to go racing.

Engineer Giotto Bizzarini was so determined to get the GTO’s aerodynamically correct, that he spent time at the University of Milan playing with an early version of wind tunnel aerodynamics to reduce as much drag as possible for a maximum top speed of 168 mph (270 km/h). But as much as Bizzarini was involved in the project, the GTO still looked like a Scaglietti masterpiece with lines dictated by the physics of airflow. 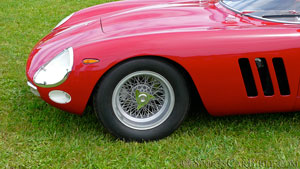 After the mass firing by Enzo of five engineers including Bizzarini, the GTO project fell into the hands of young engineer Mauro Forghieri, who almost finished the GTO on time for the beginning of the 1962 season.

The GTO’s all aluminum body retained most of the SWB design queues though, but Scaglietti’s one-piece front panel was aerodynamically shaped with Plexiglas covered headlights. Also no front bumper was found, but a pair of rectangular high beam lights were located on the outside of a small and low oval radiator mouth that almost seemed to kiss the ground. To help with the cooling process the hood was fitted with three horizontally lined up openings just above the grill that could also be closed if needed, while another identical opening just before the engine lid allowed access to the radiator cap. A hood bulge was necessary to fit six downdraught twin-choke Weber carburetors placed on top of the V12, and to keep the interior cool, two Plexiglas air-scoops were fitted by the windshield base.

Two slanted air vents were on each side of the front fender, but while racing, a few GTOs were damaged and rebuilt later on with three vents to again help cool the engine. The rear and sliding side windows were made out off Plexiglas, and a cockpit air vent at the top of the rear window was there to dissipate hot air from the cabin. The rear fenders received a large teardrop shaped air vent to again let hot air out, and the rear Kamm tail adorned the first rear spoiler ever seen on a production car (riveted on the first GTOs). This new aerodynamic device pressed on the rear-axle at high speed giving the GTO better stability and increased the rear-end grip on fast curves. On the truncated rear Kamm-tail, two vertically stacked-up round taillights on each side with a reflective rectangular element underneath them and four tailpipes were unobstructed by any bumpers. 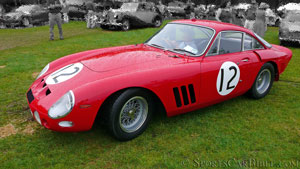 The engine was placed at the front and was the 3 liter (180 cu in) V12 Colombo with one single-cam per bank, as mentioned, it was fed by six Weber carburetors that needed tuning every 311 miles (500 km). The V12 had all the exotic Testa Rossa specifications with its hot-cams, but two black crackled cam covers replaced the red ones found on the Testa Rossa (Red Head). A dry sump oil system and larger valves helped produce at least 295 hp at 7500 rpm before being released by the factory, making it possible to get from 0 to 60 mph in an impressive 5.5 seconds. An all new synchronized gearbox fitted with a fifth gear ratio was a welcome addition. Its imposing gear lever seemed to be the interior centerpiece with its massive and elevated exposed metal gated box. 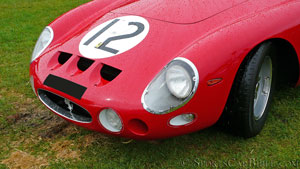 The interior was as race oriented as the outside with no leather and just clothed deep bucket seats. All exposed bare metal chassis tubing and welds could be seen all around. A crackled anti-reflective black finish was applied on the dashboard and binnacle with all the Veglia dials fitted under the binnacle. No speedometer could be seen, but a big rev counter was at the center of the five other small gauges, all were superseded by a three branch wooden Nardi steering wheel.

The Ferrari 250 GTO meant business and went on to win the World Manufacturer GT Championship in 1962 and 63. Later on 1963 three Ferrari 330 GTOs were built identically to the 1962 Ferrari 250 GTO's design on a slighlty longer chassis. These 3 Ferrari 330 GTOs were only fitted with a 4L (242 cu in) enlarged V12 producing 390 hp @ 7000 rpm but they never really were successful on the race circuit. Then in 1964, Ferrari again won the World Manufacturer GT Championship with a second, wider and shorter version of the Ferrari GTO named, the GTO’ 64. Only 3 GTO’ 64 were originally built, then 4 older first series 250 GTOs were reconditioned to these new wider standards. Unlike the 250 GTO, the GTO’ 64 wasn’t as well proportioned to look at as the original 250 GTOs and never became a wall poster darling like the 1962 250 GTO is today, but it is maybe after all the role of the 250 LM to take on.

With massive success under its belt, glorious lines, urging power, perfect balance and handling, the Ferrari 250 GTO was the ultimate expression of the most beautiful era at Ferrari with the 250 series. This gave Ferrari, just after the also very successful SWB, definite International recognition as the most prestigious exotic and best sports car brand in the world. 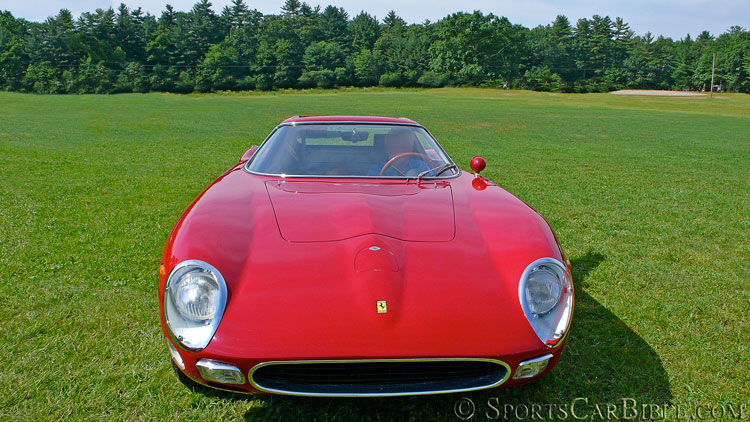