After Enzo’s successful attempt homologating the GTO as an evolution of the SWB, and thus giving him the possibility of producing only 36 cars instead of the 100 required by the FIA rules for the GT class, Enzo wanted to try his luck again with the GTO’s replacement, the late 1963 Ferrari 250 LM. 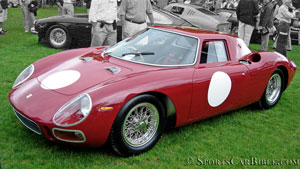 The Ferrari 250 LM was a Coupe version of its sister, the racing open sport prototype Ferrari 250 P, except that this new comer would mainly end up being a closed version of the 250 P. The nomenclature reflected the engine’s capacity of one cylinder in cubic centimeters, multiplied by 12 this gave a 3000cc/3 liter (180 cu in) capacity, and as usual the “LM” stood for the French “Le Mans” international race.

As mentioned, Enzo tried to get around FIA rules to build less cars then required, but this time around the FIA didn’t buy his stories, and the GT class with a capacity of maximum 3 liter (183 cu in) was denied to the 250 LM in 1964. This gave the opportunity to the 1964 wider and shorter “GTO’ 64” an entry on the international race circuit and secured once more the GT Manufacturer Championship for Ferrari in 1964. 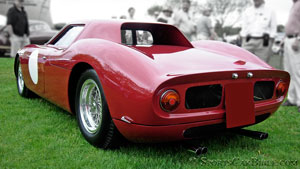 The Ferrari 250 LM was left to be entered as a Prototype racer, which it really was, with its mid-engine layout finally adopted by Enzo after his theory of having “the horse pulling the carriage not pushing it” discredited by John Cooper. Not having to obey FIA production car regulations anymore with the 3 liter GT capacity class (183 cu in max.), the Colombo V12 was then enlarged in 1964 to 3.3 liter (200 cu in). It still was fitted with six twin-choke Weber carburetors and the Testa Rossa’s valves giving the 250 LM 320 hp at 7500 rpm. The name should then have been changed with the larger capacity making it a 275 LM, but for homologation reasons Enzo kept the 250 nomenclature. It is because the 250 LM was offered as a road legal GT car that it is represented here making the Ferrari 250 LM a serious contender for being the first mid-engine supercar often credited to the Lamborghini Miura. After all, the 250 LM can be considered as a prototype racer allowed on the street, but then isn’t it what a lot of modern Supercars are anyway? As are the Carrera GT with its Sport Prototype derivate engine, Ferrari F 50 with its F1 engine, Porsche GT1... just to play devil’s advocate. 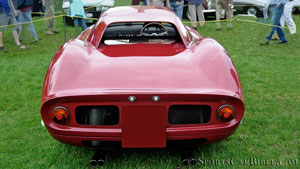 A tubular spaceframe chassis was used with all around independent suspensions and disc brakes, while the antiquated Worm & Sector steering box was replaced by a more positive and precise rack and pinion system. The 3.3 liter V12 was set just behind the driver giving the 250 LM cornering capabilities not experienced on a GTO and the same went for the smoother five speed dogleg transmission (1st bottom left) giving the underrated 250 LM a quantum leap over the GTO, not that GT cars should be compared against Prototype racers anyway.

The Design was done by PininFarina, and coach-built down the road by Scaglietti with covered headlights, a large mesh grill unlike the usual egg-crate grill, and an extra driving lamp was located just underneath each headlamp. Two Plexiglas air scoops venting the cockpit were placed on the hood by the rakish windshield with two scissor clap windshield wipers. The roofline continued far after the vertical rear window giving a tunnel vision like appearance to the rear window. The long, one-piece rear panel opened in a clamshell like fashion, giving great access to the engine bay. Two massive bulged air intake scoops at the top of the rear fenders fed fresh air into the engine, while the truncated kamm-tail received a rear spoiler, which was necessary after a few unstable high speed pre-test runs. One round taillight at each extremity of the Kamm tail closed the LM Lines, with two large rectangular meshed air vents fitted just inward of the rear lamps. Under the rear panel four thin pipes “a la 250 TDF” gave the 250 LM its particular high pitch tone and Borrani wire wheels were used for the last time on the race going LM with some LM cars already equipped with magnesium ATS wheels. 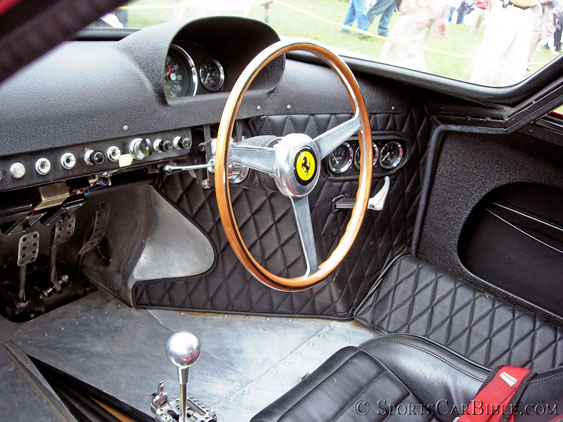 The interior was all bare metal with three main Veglia dials in front of the driver under a wooden Nardi steering wheel. A cluster of three smaller gauges could be found at the bottom right of the windshield, while the open metal gearbox gate was in between two heavily bucketed clothed seats.

The 250 LM had a factory top speed “claim” of 180 mph (290 km/h), while 5 seconds were needed to get to 60 mph from a standstill, making it faster than the GTO. The 250 LM won many races including the Targa Florio in its class, the Coppa Inter Europa with a first and second place win, Montlhery… but most importantly Le Mans was won in 1965 with a first and second podium place against the Ford GT40s and their monstrous 4.7 and 7 liter V8 engines (289 & 427 cu in).

Being a mid-engine car the 250 LM was more race oriented than the GTO…so why today is the 250 LM "so underrated" with only 32 Ferrari 250 LM ever produced between 1963 and 1965? Out of these 32 LMs only 1 LM had been especially made for road use (250 LM Stardale/Street) with a more pleasing fastback treatment giving it the appearance of an 1963 ATS 2500. Leather and carpet were also found inside, while little overriders served as bumpers. This resulted in the reconditioning of 15 Ferrari 250 LM racers to be modified for the road, but without the “ATS 2500 look” of the original 250 LM Stradale. This maybe gave to that little batch of 16 Ferrari 250 LM Stradale the title of the first mid-engine Supercar in the world… maybe… or was it the ATS 2500?!