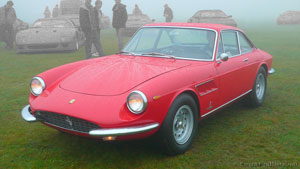 In 1966 Ferrari introduced a sensible two-seater sports coupe model with the Ferrari 330 GTC. The philosophy behind this easy to drive and comfortable GT coupe came from the Superamerica and Superfast

series. That approach was used on a shorter scale in the elegant but discreet 275 GTS convertible from 1964.

The 330 GTC was an intermediate model lodged between the top of the line and sporty feline Ferrari 275 GTB, and the four-seater 330 GT 2+2, series II, which looked like a long version of the GTC. PininFarina designed and built the 330 GTC with steel panels and aluminum doors, trunk and hood lid. The chassis used was the 2400 mm (94.5 in) short wheelbase unit with Girling disc brakes fitted all around as was the independent suspension giving the 330 GTC a composed ride. 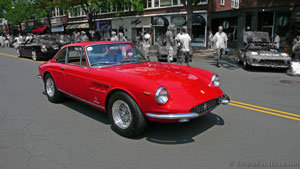 The front was an extrapolation of the 500 Superfast, which could also be found on the 275 GTS, but unlike this last one, the nose was extended and ended in a small front oval egg-crate grill with the prancing horse logo placed on it and surrounded by two thin chromed split bumpers. The side front fenders had three slatted air vents also 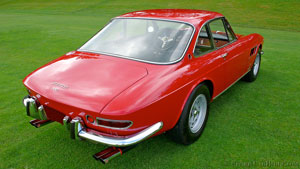 seen on the Superfast and the later 275 GTS. The very thin pillars gave a wonderful all around visibility, which was accentuated by a comfortable upright driving position. The rear was almost identical to the 275 GTS with cat tongue shaped taillights placed just above a chromed split bumper fitted with overriders. Then, finishing off the back-end was the unmistakable traditional quad-exhaust pipes. Ten hole Borrani alloy wheels were standard, but wire wheels from the same maker were available as an option. 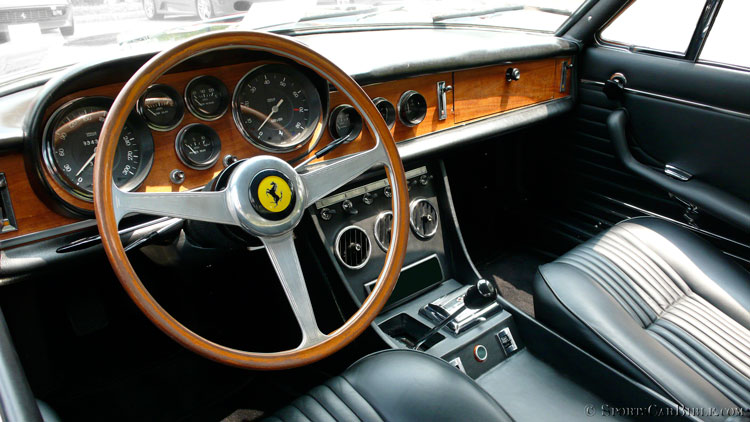 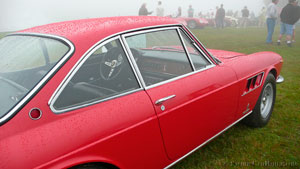 The interior also was inspired by the Superfast with two main Veglia gauges and three annex dials at the center of them all fitted under the oval binnacle. Plenty of warm teak veneer adorned the dashboard with the traditional Nardi steering wheel. The center dash had three more small dials including a clock, while a center console housed three round air vents, which matched the three dials above. A row of switches were placed in between including the now standard electrically powered 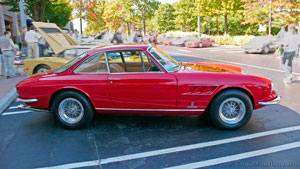 windows and radio. The traditional ashtray with Ferrari and PininFarina emblems on it was next to the five speed exposed metal transmission gate at the base of the center console. The 330 GTC had two non-bucketed seats, but don’t be alarmed, this sweet cruiser had other priorities in mind with well-padded seats giving its focus to long, fast and easy journeys. To make your experience even more pleasant, air conditioning was available as an option to tame the heat coming from the large glass surface area. 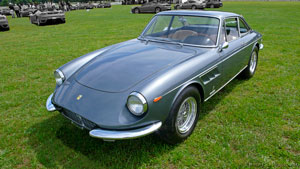 The front engine was the same as the 330 GT 2+2 presented two years earlier with its single-cam 4 liter (242 cu in) V12 developing 300 hp at 6600 rpm. This allowed the 330 GTC to get to 60 mph in 6.5 seconds, while capable of reaching a top speed of 150 mph (241 km/h). The transaxle 5 speed transmission at the back was there for better weight distribution, and a torque tube was fitted to preserve the drive shaft from wearing out too quickly, unlike the 275 GTS.

Later on that year in 1966, Ferrari introduced the convertible labeled, the Ferrari 330 GTS. The 330 GTS retained everything from the coupe aside from the rear fenders, which had a very slightly raised shoulder line and came down on the recessed trunk lid on the end of the tail. And of course its fixed metal roof was replaced by a canvas top with a clear plastic rear window, while a hardtop could be purchase as an option. 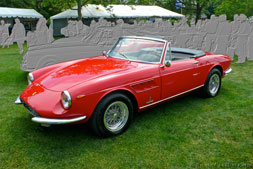 For a long time the 330 GTC had been set aside as a forgotten and bland Ferrari due to its less charismatic and uncalled for comparison with the 275 GTB goddess. But everything about the GTC was mature and understated as well as well mannered, from the driving position to the perfect visibility, without forgetting its independent suspension, disc brakes and five-speed gearbox. And with its torquey and generous engine this made the GTC more popular than ever with newly awakened car collectors. 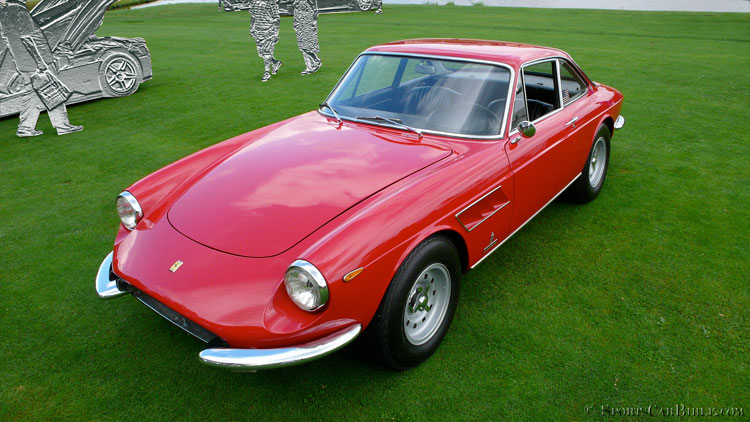 Ferrari 330 GTC - Very elegant business class
GT fitted with classic Borrani wire wheels.
Ferrari 330 GTC - Split front bumpers without
overriders at the front but present at the back.
Ferrari 330 GTS - Same dashboard as the GTC
and just enough space for a romantic getaway.
Ferrari 330 GTS - The GTS (Spider) is simply a
drop head version of the GTC. Notice the recessed
trunk and elevated rear wings which differ from
the 330 GTC but is identical to the 275 GTS.

Ferrari 330 GTC - Unlike the previous 275 GTS
and its "short nose" the 330 GTC / GTS had a
nose that extended past the headlight design.
Ferrari 330 GTC - The very thin pillars allow the driver to
see all around him/her without any major neck stretching.
Ferrari 330 GTC - Front side air vents as seen on the
1964-66 Ferrari 275 GTS. The 10 hole alloy wheels
were a departure from the wire wheels but
Borrani's were still offered as an option.
Ferrari 330 GTC - 4 liter (242 cu in) V12 engine with its 3
Weber carburetors producing a healthy 300 hp at 6600 rpm.
Ferrari 330 GTC - Usual quad-pipes, "Cat tongue"
taillights and overriders on the rear bumpers only.
Ferrari 330 GTC - Superb and relaxing interior "a la Superfast" with teak
veneer, electric windows and an optional AC to complete the package.