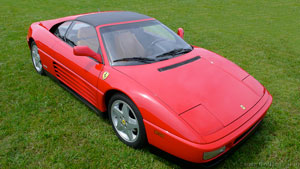 After the cherished Ferrari 328 GTB and GTS ceased production, it was time for Ferrari to unveil its replacement in September 1989 with the new little V8 Berlinetta, the Ferrari 348.

From the start the 348 came in two body trims, with the "TB" for Berlinetta (coupe), and "TS" for the targa-top model (Spider). The “T” gave emphasis to the Transversally mounted gearbox set to the back of the longitudinally placed engine, while the previous little berlinettas, starting from the 206 Dino, had transversally mounted engines to remain compact. Another big change occurred with the chassis now being a monocoque steel pressed unit, instead of the tubular one. 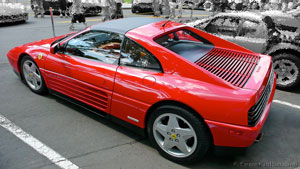 The chassis received an all around independent suspension, and ventilated disc brakes all around now fitted with ABS as standard. The building process also changed dramatically with the use of Computer Aided Design (CAD) to satisfy increasing world demands for safer cars, while welding robots were implemented for speed and accuracy. This allowed the 348 to meet all global market demands without altering body panels like the bumpers, or reducing power output depending on the country destination. 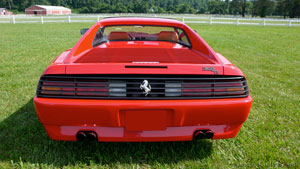 As with most Ferraris, Pininfarina designed the 348, and this time the Testarossa was on his in mind, so much so that people dubbed the 348 the “Baby Testarossa”. The 348 had steel panels and aluminum lids with GRP (plastic) bumpers. The lower front spoiler spiltter, doorsills and low rear valance were finished in black as well as the front grill. The front turning signals/parking lights set at each side of the bumper never quite seemed to fit right into the bumper though. Rectangular pop-up headlights were a refreshing change from the older round units, as well as the compact one-piece side mirrors. The long engine air intakes, starting from the doors underneath the belt line, housed three horizontal slats (baby Testarossa). But unlike the Testarossa, they didn’t extend to the rear fenders, even if the actual air entry was located in the rear lower quarter panel. On the doorsills and running parallel to this main intake was a single channeled intake also feeding the engine

bay. A third engine air intake was located at the base of the flying buttresses, and to vent the engine a series of louvers covering the engine lid did just that. Also part of the cooling process was a meshed screen fitted in between the very wide rectangular taillights covered by five black horizontal slats running through the entire width of the 348 (again like the Testarossa). The five spoke alloy wheels had a different pattern to them with chiseled spokes resembling a propeller. Carved in the rear valance were the four exhaust pipes, which had been part of the Italian folklore since decades. 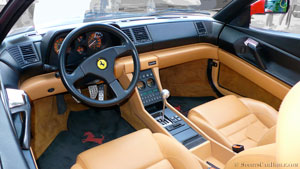 The interior revealed a more squarely shaped binnacle than the one found on the 308/328 series, with four orange numbering dials. The oil temperature and fuel gauge were found on the center console and was something not seen on any previous little Berlinettas before. On the lower section of the center console was a series of switches for the fog lights, heat/AC system and electric seat adjustments. A five-speed dog-leg (1st bottom left) exposed metal gear lever gate, and door lock switches were on the tunnel console surrounded by the usual leather covered bucket seats. Like the 308/328 GTS series, the Targa-top on the “TS” models could be lodged just behind the two seats. 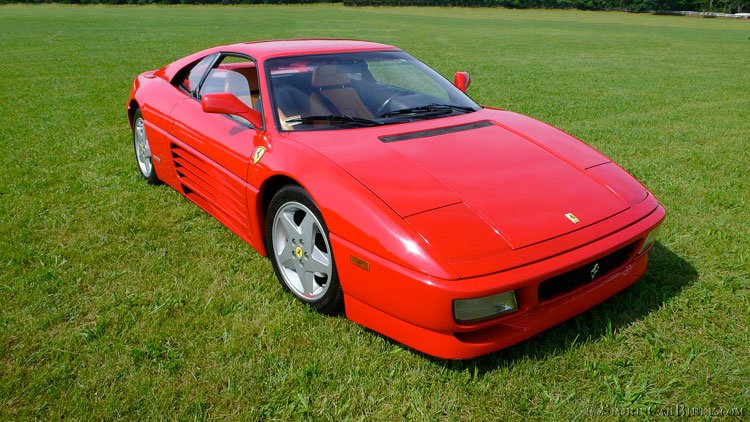 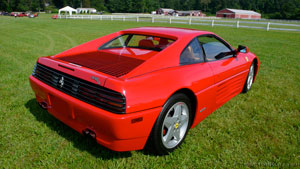 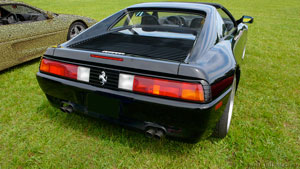 In 1992 the United States received a limited production of 80 instead of the 100 Ferrari 348 “Serie Speciale” planned. These 348 Serie Speciale were available on the TB or TS model with a sport exhaust helping to produce 310 hp, while it’s wider rear track gave better grip. Its body color coded deeper front spoiler splitter, door sills, and low rear valance would then be adopted on all 348s. Another change for the “Special Series” was the deletion of the five horizontal black rear slats over the taillights, but the blacked-out rear prancing horse in the middle of the taillights was now chromed for all 348s.

The inside was also different with two deep bucket seats with Kevlar seat frames. In American 348 models, the new fully encased side light markers on all fenders were a welcome improvement over the surface mounted units found on previous US Berlinettas.

A year later in 1993, the 348 Spider was introduced and was the first two-seater convertible since the 1969 Daytona Spider. The transformation was a success and gave the 348 a new life with its elegant soft top also mimicking the TB and TS rear buttresses.

Still in 1993, the TB and TS nomenclature was dropped and renamed the “GTB” and “GTS”. These 348s received a full body paint treatment like the US “Serie Speciale”, an updated injection system and sports exhaust now giving 320 hp at 7800 rpm.

That same year another limited series was offered in Europe with the 348 “GT Competizione” or “GTC”. This limited series of 56 cars could only be differentiated by its five spoke split rim wheels looking a little too after market for most tifosis, its special three branch steering wheel and deep Kevlar seat frame covered in “grippy” red cloth.

The production of the 348 GTB and GTS ended in 1994, but the 348 Spider kept on being produced until 1995 until the next V8 generation, with the beloved F355, was being offered in Spider form. Today the Ferrari 348 isn’t regarded as the best small Ferrari V8 due to its lack of identity mostly taken from the Testarossa, and its poor fit and finish executed with Fiat’s interior parts bin. Also its relatively small power output for the time, and nervous handling at the limit didn’t help to secure a good place in Ferrari’s history book. But with 8708 Ferrari 348s sold Worldwide, it was a good seller for Ferrari in the middle of a world economic crisis, and the start of the private Ferrari racing formula, the “Ferrari Challenge” series. Today though the 348 is a cheap way to enter the Ferrari stable.

Ferrari 348 Spider - Great view of
the prominent engine cooling slats.
Ferrari 348 TS - The "Serie Speciale" received deeply
bucketed with very light carbon fiber seat frames.
Ferrari 348 GTB - The big side slats channeling air into the
engine bay helped support the nickname "Baby Testarossa".
Ferrari 348 TS - The "Targa" version of the 348
has a black vinyl removable roof-top
that can be stored behind the seats.
Notice the air-intake scoop between
the rear side window and the rear pillar.
Ferrari 348 GTB - The 1993-95 all body color coded 348 Berlinetta
model was renamed "GTB" instead of "TB".
The same goes with the "TS" becoming the "GTS".