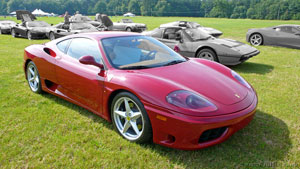 After Ferrari’s F355 masterpiece being held as the best all rounded Supercar in the world produced between 1994 and 1999, Ferrari had a tough act to follow. Ferrari’s president Luca Cordero di Montezemolo 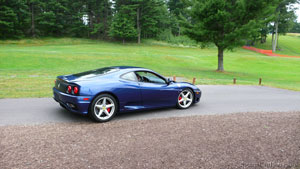 wanted to go further in his quest to build an exciting and tactile car to drive with astonishing performance. So in 1999 the Ferrari 360 Modena was introduced, however now with this new V8 mid-rear engine berlinetta Ferrari also decided to produce a more practical day to day V8 Berlinetta with better interior size and ergonomics. 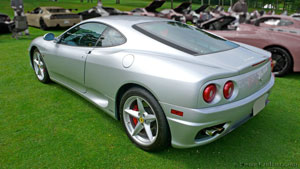 The name chosen for this new entry level Ferrari referred to the engine capacity of 3.6 liter (219 cu in), while Modena is the major city located 11 miles / 18 km from Maranello where the factory is located, it also is the name of the Province including Maranello. The town of Modena, was also dear to Enzo Ferrari’s heart, simply because he was born and initially created the Scuderia Ferrari in Modena. 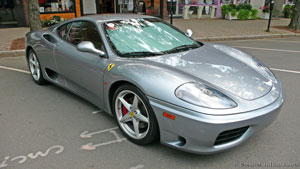 Unlike the F355, which was based on the 348, the 360 Modena was new from the ground up and used an all new aluminum spaceframe chassis developed by the American aluminum company “Alcoa” who made the 1st generation Audi A8’s chassis. This new process stiffened the 360’s chassis by a staggering 40% over the F 355. This solution was also adopted on the suspension components to reduce the unsprung weight. The adoption of aluminium helped to claim a weight saving of 176 lbs (80kg). On the other hand and as usual the styling was given to Pininfarina 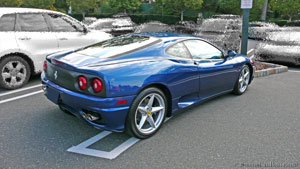 To break all the rules, Pininfarina’s design was also a departure from the little Dinos to the F355. For a start the central grill was deleted and replaced by two side air intakes as seen in the McLaren F1 or Porsche 911 Turbo (996). But in the Ferrari’s case the front air intakes looked odd due to a slightly raised bumper fitted for an easier city use. As in 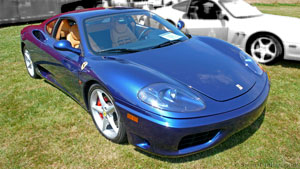 the 550 Maranello, the 360 ditched the pop up headlights for a more aerodynamic clear covered solution. From the profile two air intakes could be seen. The lower one located in front of the bottom rear wheel arches was fed by a recessed air channel starting from the door to the undertray venturi to create downforce. The second air intake was a visual cue taken from the 1963 Ferrari 250 LM. The top intakes were located at the 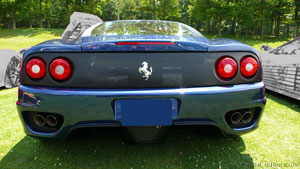 top of the rear fenders by the rear quarter window, which also was different than the previous models with its rounded corners. Sadly the iconic rear flying buttresses introduced on the entry-level Ferrari production cars since the little Dinos were changed to a more aerodynamic “Fastback” design. But to everyone’s delight, Ferrari used a rear glass window as a visual portal to the shamelessly exposed beating V8. As far as the rear-end, it was executed like on the 550 Maranello with the rear lid forming a wavy pattern “a la Marcos” with the third stop light mounted directly on the raised center 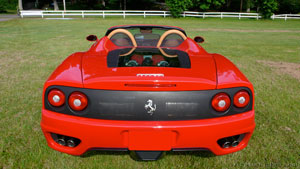 lid. A popular and pleasing option to see was the all meshed rear black screen, which allowed the engine to cool faster. But it also canceled the “flat spot” found on the standard “solid” and too lengthy color-coded rear panel. The quad-exhaust pipes seemed a little lost and off center from their scoops, which match the front air intakes. Quickly though your eyes were drawn to the center bumper where two massive rear venturies gave a total of 397 lb (180 kg) of down-force at 180 mph (290 km/h), thus about four times what the F355 was generating, thanks to a full flat undertray unlike the partial one found on the F355. 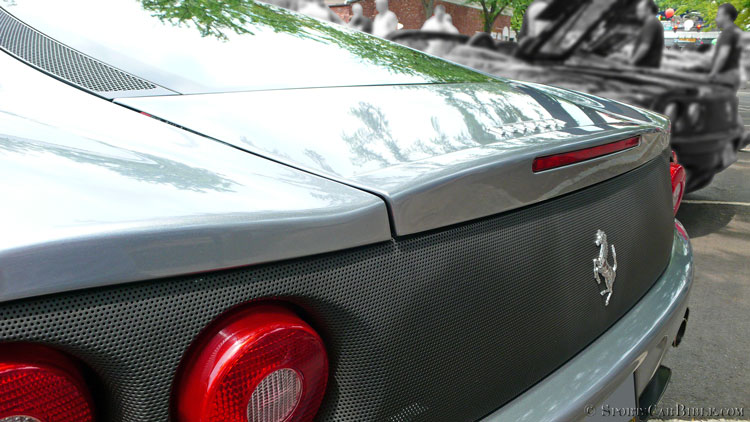 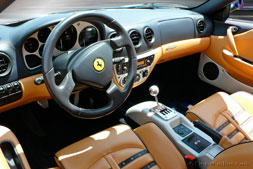 The interior was more accessible due to raised seats, it also provided leg and head room with its longer chassis. Also it allowed the 360 to have enough space behind the seats to fit a golf bag or soft bag, making the 360 the most practical entry-level Ferrari ever produced. The instrument binnacle also changed from the F355 with an aluminum background housing five gauges with 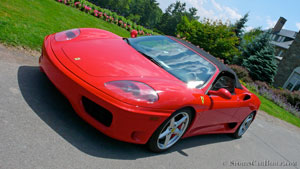 the rev-counter as the biggest dial right in the center dash. The fully adjustable, in rake and reach, three branch steering wheel with air-bag was thinner and better finished than the bulky one found on the F355. Overall you could see a vast improvement in build quality over the F355. Five round interior air vents were placed on the dashboard and were a welcome update much more modern than the older F355’s rectangular units. Below the three air vents on the center dash was the radio and AC/heat control unit layout in a compact and clean manner. The plastic and tacky tunnel console, 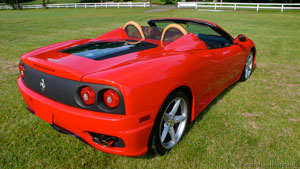 desperately trying to mimic an aluminum finish, housed the six speed manual gearbox and its exposed gate. This time the transmission was longitudinally placed to make for a smoother shifting experience, or you could opt for a new and improved six speed F1 electrohydraulic shift sequential gearbox with paddle shifters behind the steering wheel. Also an electronic damping system could be set for “Sport” or “Normal” mode, while the traction control (ASR) could ultimately be turned off for an even sportier experience. 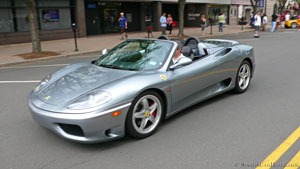 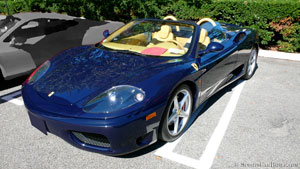 This gave the 360 a creamier and punchier acceleration, which was also helped by the more responsive drive by wire throttle system and variable exhaust valves. The 0-60 mph time was of 4.5 seconds, while 4.2 sec could be achieved with the F1 transmission with only 150 milliseconds needed to upshift, but this last 6 speed F1 transmission could still be jerky at times and wasn’t as involved as the manual gearbox, but managed three seconds less at Fiorano (Ferrari’s track) than the F355. 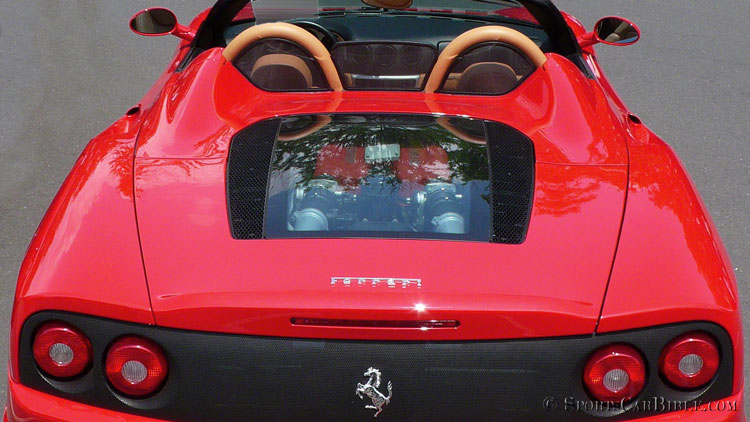 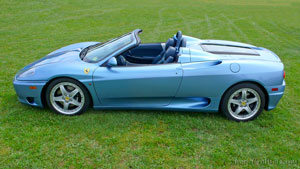 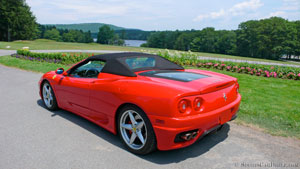 had a completely automated electric soft-top with rear buttresses that disappeared under a rear panel with flowing headrests and roll bar hoops. The engine lid was now flat but retain the glass engine cover to make your eyes water. 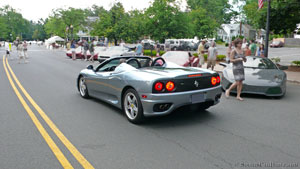 The Ferrari 360 Modena also competed within its own class with the “360 Challenge” series, and in 2003 a light street version of the 360 racer was introduced with the Ferrari 360 Challenge Stradale (Street) or 360 CS. A total of 242 lbs (110 kg) were shed from the “standard” car with the adoption of carbon fiber for the interior door panels, tunnel console, 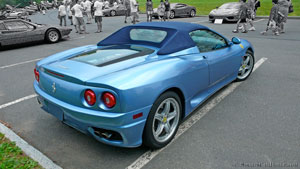 and bucket seats, while the carpets were removed. On the outside, the carbon fiber craze continued with a front spoiler lip and more profiled side mirrors. In Europe Perspex sliding side windows could also be ordered, but if you wanted to really be different a hand painted Italian flag inspired central body strip was also on the catalogue’s menu for around $5000. 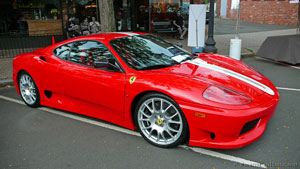 Inside again the diet treatment let you see the tubular welds done by a volunteer, and on the binnacle the rev-counter background turned yellow, while a “dead on” center marking on the steering wheel helped you focus on twisty and busy race tracks. Racing seats with harnesses were standard, but the only transmission available was the six speed F1 unit with a longer upshift paddle. The tunnel console was redesigned with a newly fitted start button giving you a sense of being in a real racing car. Next to the “Start” button you could find the on/off traction control button allowing you to play it safe or have full control at the track. Still on the tunnel console a “Race” button firmed-up the already lower and stiffer suspensions, increased the throttle response, and halved the 150 milliseconds shifting-up time usually taken by the standard Modena’s F1 transmission. 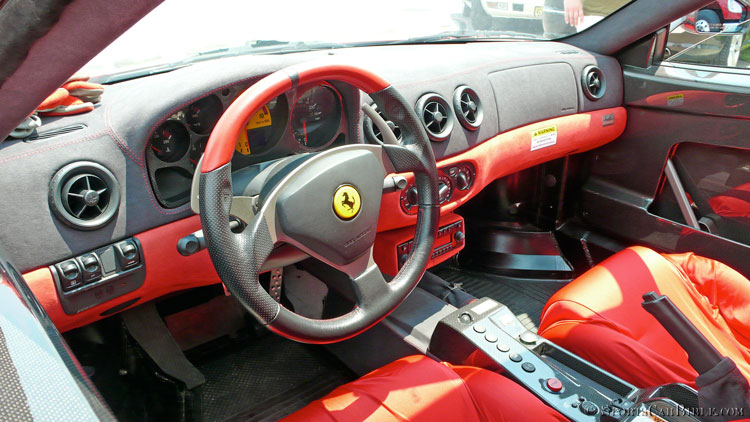 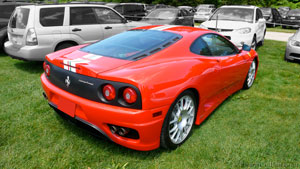 Once revving on the engine at the helm of your 360 CS, a surprise awaited you with the second exhaust’s stage valves, giving you a new surge of power from 6300 rpm all the way up to 8500 rpm. This made it obvious that the 360 Challenge Stradale was in another league than the “standard” 360. Power also was on the rise with 425 hp found at 8500 rpm (119 hp/ liter), and to put this power to the ground a new 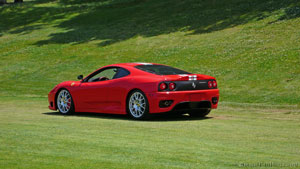 set of more attractive 19” BBS alloy wheels with carbon ceramic brakes replaced the already efficient cross-drilled steel units. All this weight loss and improved performance meant that the Ferrari 360 Challenge Stradale could sprint to 60 mph from a standstill in 4 seconds flat when using the launch control “LC” mode, also found on the tunnel console. 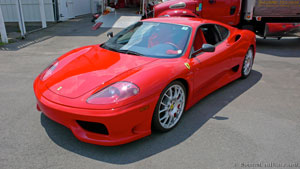 The last Ferrari 360 Modena left Maranello in 2005 and was another success for the Italian car maker. This time in all areas of production from the design to the interior quality and ergonomics. With this you couldn’t forget the technical “tour de force” that propelled and made the Ferrari 360 handle and respond so well, even if it was reportedly a little tail happy at the limits of adhesion.