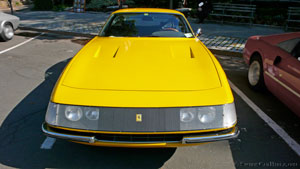 Ferrari was in a difficult financial situation by the end of the 60’s, and while Lamborghini released the Miura, its mi-engine exotic Supercar, Ferrari had to wait to be able to produce their avant-garde Supercar. So a stopgap model including most of the 275 GTB front engine layout was designed by Leonardo Fioravanti, working at the time for Pininfarnia. It was then built by Sergio Scaglietti right down the street from Ferrari. This supposedly “in between” model arrived in October 1968 and was called the Ferrari 365 GTB/4. 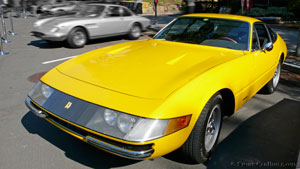 But it was quickly dubbed the Ferrari Daytona after the triple win at Daytona by Ferrari in 1967 with the P3 and P4 sport prototype, taking back the crown in a major way from Ford after their Le Mans win, and the previous year’s title, the Manufacturer’s World Championship. 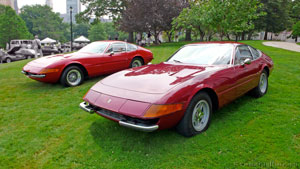 The short wheelbase chassis was 2400 mm (94.5 in) and was basically the same found on the 275 GTB, but it had ventilated disc brakes all around as well as an all independent suspension. The rear five speed dogleg (1st bottom left) transaxle transmission provided better weight distribution, which was also emphasized by the front engine being placed as far back as possible. 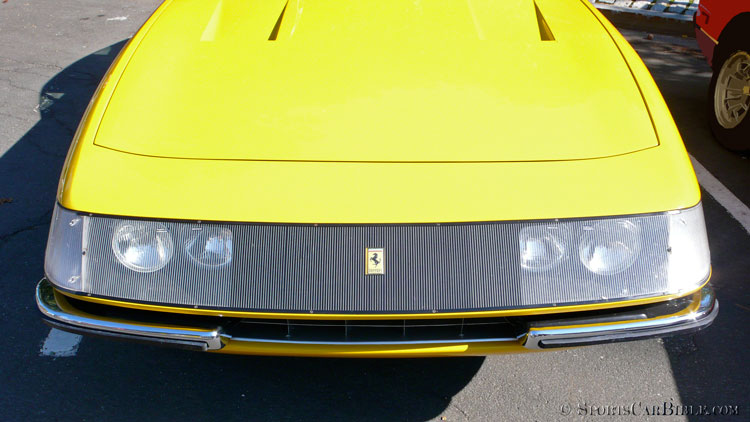 The overall American inspired design was very clean and simple, but harmoniously beautiful as well with a long pointed hood adorning two air vents on it. An all Plexiglas nose covering two sets of round headlights on each side with wrap around turning signals as an extension of the frontal Plexiglas piece looked futuristic and menacing. An opening 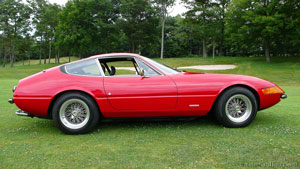 between the split bumpers and the front Plexiglas pieces let you see the bottom-end of the headlights, while a thin egg-crate grill was located between the bumpers. The 15” five star alloy wheel set still had the central knock-off hub nut, but Borrani wire wheels were also offered as an option. The all profile line was clean and showed a thin recessed belt line that ran all around the car, while the door handles were fitted at the bottom chrome 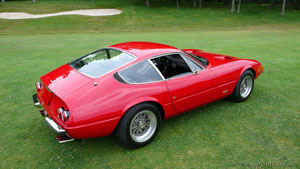 window trim, giving the doors an uncluttered look. The general line all seemed to start from the nose and sweep around the rear quarter window to come back forward onto the roofline. Only the rear fender reflector elements for the US market altered the purity of its design. A rear fastback and a slanted truncated tail with two horizontal round taillights on each side, which will be Ferrari’s rear lights trade mark for quite some time, matched the quad-pipes found under two split bumpers. 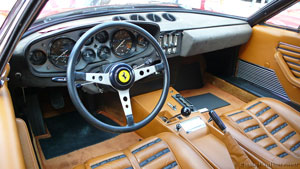 Inside this two seater was a dashboard including four round interior vents at the top center, and an oval binnacle with eight gauges cramped into it. The dashboard was then covered with vinyl at first, but ended-up quickly to be replaced by alcantara (faux-suede) to suppress sun reflection. The Nardi steering wheel rim was in wood at first but got re-trimmed later on in leather. The center console housed switches, lever vents with the optional AC controls. On the transmission tunnel were the electric window switches and the traditional chromed ashtray just next to the exposed metal gate gear lever. Leather could be found all around with the optional dual tone leather stripes pattern on the bucketed seats, now called “Daytona Seats” even on modern Ferraris. 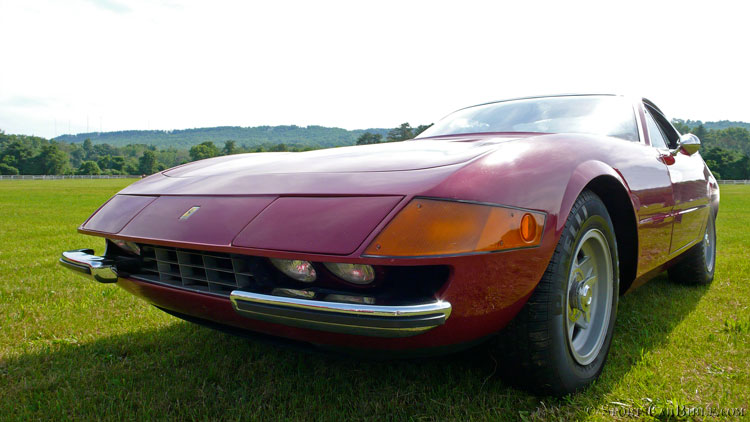 In 1969, the Daytona Spider (convertible) was introduced, called the Ferrari 365 GTS/4, it was essentially a soft-top version of the Daytona coupe with a horizontal trunk lid. In 1971, US Federal laws banned the use of Plexiglas over headlights, so retractable units were fitted with 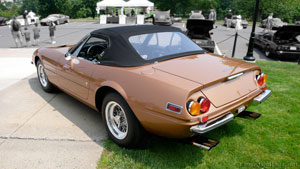 silver paint at first to mimic the old Plexiglas look, but it was thankfully body color matched early on. Also that year the steel body fitted with aluminum doors, trunk and hood lid changed over to steel doors with reinforced internal steel bars for better side collision impact protection. 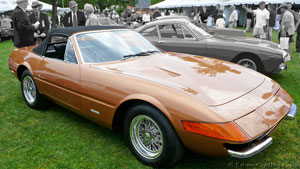 All these changes were global to facilitate production. The engine was the 4.4 liter (268 cu in) V12 with four-cams. It was fitted with a dry sump system to lower the center of gravity and developed with the help of six Weber carburetors a healthy 352 hp at 7500 rpm. This gave the Daytona a 0-60 mph time of 5.5 seconds, but most importantly a top speed of 174 mph (280 km/h), crowning the Ferrari Daytona the fastest car in the world just ahead of the exotic Lamborghini Miura. 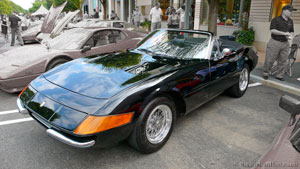 What the Miura didn’t have was the Daytona’s composure with its front engine, fantastic handling and steering feedback, even if this non-assisted steering unit could be a handful in town. This association of raw power and balance allowed the Daytona to take the “Best Sports Car in the World” title back to Maranello.

The Daytona’s production ended in 1973 after 1284 Ferrari Daytonas were sold including 122 Daytona Spiders. This “in between” model is now in Ferrari’s pantheon as one of the brand’s best masterpieces with its breathtaking looks, and large and raw carbureted V12. Overtime it also eclipsed Ferrari’s next model and supposedly more advanced first 12 cylinder exotic mid-rear engine sports car, the Berlinetta Boxer… not bad for a stopgap model. 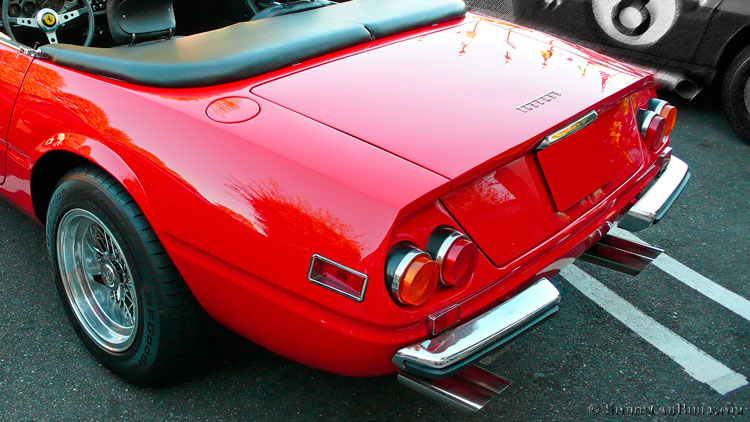 Ferrari 365 GTB/4 Daytona - European side lights with their half clear/orange finish.
The "Prancing Horse" logo can also be seen on the round orange reflector.