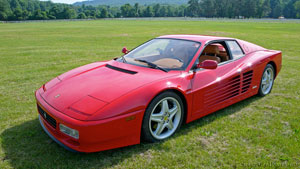 In 1992 the Ferrari Testarossa received a needed update. The new Testarossa, now re-named the Ferrari 512 TR, re-established itself as a true, proper and worthy flagship Ferrari, that seamed to have been lost by the end of the original Testarossa production life. 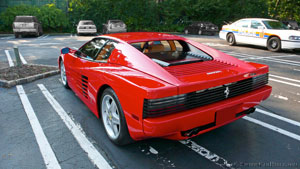 with a body color coded front bumper now housing a set of turning signals and auxiliary lights “a la 348”, but with the 512 TR, they were better encased. To continue with the 348 theme the grill was cut similarly with a chromed prancing horse logo at the center of it. Underneath each turning signal /parking light sets was an air intake scoop to cool the front disc brakes. This gave a well proportioned and symmetrical front-end look that the older and odd single left sided scoop Testarossa couldn’t match. The artistic and aerodynamic dual-arm side mirror stem support remained as well as the Testarossa’s main identity. Yes, we are talking about the five horizontal side slats housed on the extremely wide rear fenders channeling 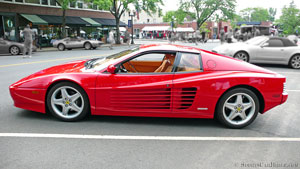 huge amounts of fresh air into the engine bay. A pattern also followed on the entire 77.8 in (1976 mm) rear width of the 512 TR, which was then adorned with five black horizontal slats now covering clear smoked taillights. Unlike the Testarossa’s black Ferrari logo, a chromed prancing horse still at the center of the rear slats, gave the 512 TR an extra cachet. On the engine lid, the rear louvers were smoothed out with a lower and sleeker center plateau. Also refreshing was the adoption of a new rear valance that surrounded the 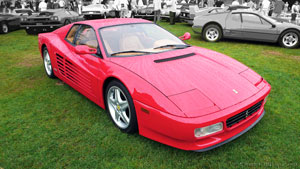 four exhaust pipes in a more enveloping and pleasing way. To complete the 512 TR’s lines, a new set of 18 in. alloy wheels with a smooth five spoke design received 235 mm wide rubber at the front, and 295 mm (11.6 in) at the back. This new wheel design, as well as the new smoother front and rear valance made all the difference in the world, and maybe even was how the Testarossa should always have looked. 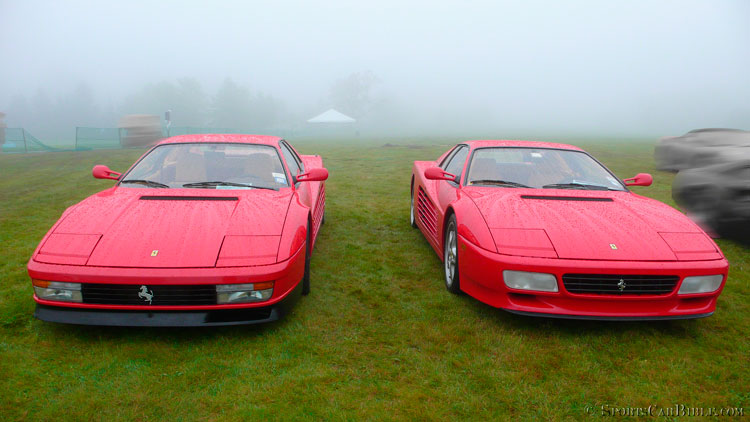 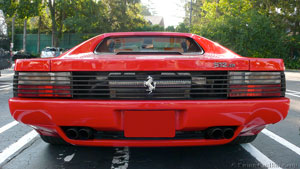 The 512 TR wasn’t all about good looks though, and most of its internal organs including the chassis were also updated. The chassis was still a tubular unit, but some strengthening was added to increase its rigidity. On the road the 512 TR felt in another class than the original 1984-91 Testarossa, while on top of that ABS brakes were a welcome safety standard. 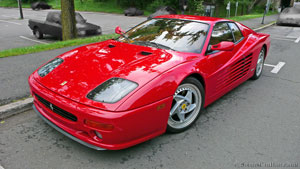 After looking and acting the part, the interior also came with a pleasant surprise that included an overall quality upgrade well needed and deserved on such a high priced Supercar. The main dashboard’s design remained, but it had been extensively polished with smoother edges around the nacelle and just about everywhere. The three round central air vents replaced the outdated rectangular units found previously, and were still lodged underneath the radio lid. Not found before though was the three additional dials on their own lower binnacle canceling at the same time the old center console. It created a sportier interior by only revealing the tunnel console… with sadly the same cheap Fiat switches. The three-branch steering wheel was more fluid and the interior door panels were also updated. 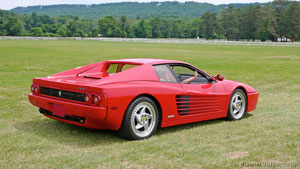 To facilitate the engine maintenance, and reduce noise and vibration, the engine was placed on a subframe, which was then bolted to the chassis. The gearbox and engine were 1 inch lower to create a better center of gravity, while the engine was the same dry sump, 180˚ flat 12 cylinder with 48 valves creating almost a 5 liter of capacity, but actually closer to 4.9 liter (302 cu in). It now delivered 428 PS / 422 hp at 6750 rpm thus 48 more horses than the previous Testarossa! From a standstill the 512 TR reached 62 mph in 4.9 seconds, while the top speed was 190 mph (306 km/h). 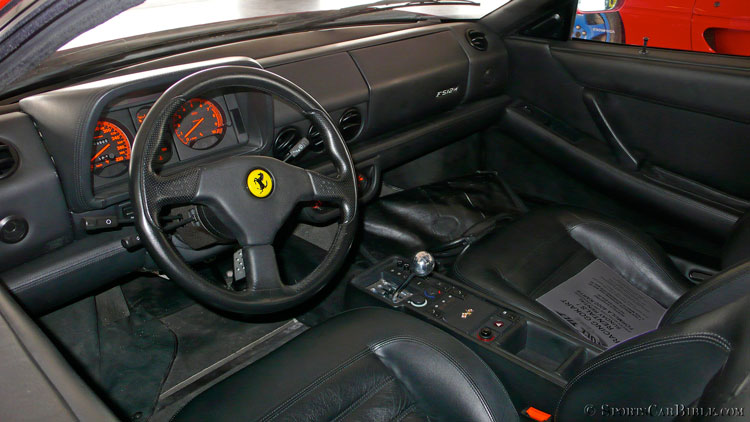 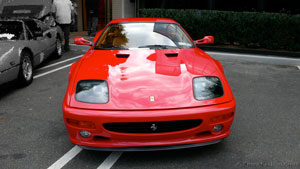 After 2,280 Ferrari 512 TRs had been built between 1992 and 94, a last and not so lucky late evolution was unveiled in 1994 with the Ferrari F512 M. The “M” stood for Modificato (modified) but most of these modifications made were a shameful calamity on this last Testarossa. The welcome updates concerned a venturi undertray to generate down force, and another 22 horses for a total now of 440 ps / 434 hp at 6750 rpm. On top of that the use of lighter aluminum body panels gave the F512 M a better power to weight ratio. 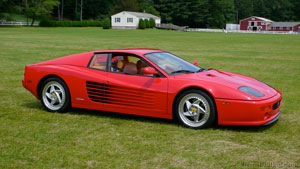 On the outside, the bodywork redesign was more of a horror story though! With an overdone bumper “a la F355”, not working at all in this particular case, the F512 M looked like it had the “village idiot’s” smiley face on. The glass covered headlights with two NACA air intakes on the hood by the windshield, there to cool the interior, looked completely unbalanced and a little flat! The split rim wheels taking queues from the 1989 Ferrari Mythos concept car (also based on the Testarossa) had an ugly aftermarket look to them and just didn’t fit on the F512 M with their “propeller” theme. Not to be outdone by the poorly redesigned front, the rear-end shed its five wide horizontal slats and replaced them with two round lights on each side with 5 connecting black strips. But the way they were fitted looked more like an afterthought design cue that a sad tuning company would have done. 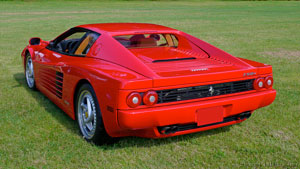 Thank God the performance was marginally better with 4.7 seconds to get to 62 mph, while 195 mph (314 km/h) was the new maximum top speed. These new numbers restored the top speed crown taken by the new 2+2 Ferrari 456 GT two years earlier.

In 1996 the last of the third Testarossa generation rolled out of Maranello, with only 500 Ferrari F512 Ms produced, ending the flamboyant 80’s era for Ferrari.

Ferrari F512 M - The "propeller" Mythos wheels
were not just too much with their twisted spokes
and split-rim nuts, but they also were "flat"
and not even "Dished" at the back.
Ferrari F512 M - The new and traditional Ferrari
round tail lights were an after thought and didn't
fit within the car's design. Furthermore, the wide
slats that gave the Testarossa / 512 TR an extra
visual width were shortened to allow the "kit" like
tail lights to fit properly within the rear panel.

Ferrari F512 M (F355) - Wanting to capitalize
on the fresh and highly regarded F355, Ferrari
tried to adopt the same bumper design but without
the same success. The center mouth was too small
and the lower intakes made the front too busy.
Ferrari F512 M - For a Supercar, you get a decent
cargo space with straps behind the rear seats.
Ferrari F512 M - Aside from the metal gear lever,
drill pedals and "F512 M" lettering on the
dash, not much has changed since the 512 TR.
Ferrari 512 TR - Close to 5 liter (302 cu in),
the quad-cam Flat 12 produces 428 hp at 6750 rpm
and can reach a top speed of 190 mph - 306 km/h.
Ferrari 512 TR- Bye bye, plasticky center console
and welcome round edges on the dashboard.
Ferrari 512 TR - Majestic and now iconic
side air-intakes with five massive slates.
Ferrari 512 TR / Testarossa - Side by side with
the Testarossa, the 512 TR has smoked tail lights
as well as a more enveloping rear valance.

Ferrari Testarossa / 512 TR - Side by side
with the Testarossa, the 512 TR has
a fresher color matching front-end.