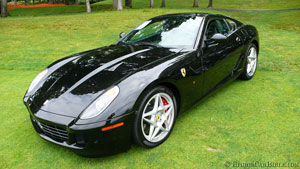 Here is the story of the Ferrari 575 M Maranello replacement, the 2006 Ferrari 599 GTB Fiorano. The nomenclature 599 corresponds to the engine capacity of 5999 cubic cm, and Fiorano is Ferrari’s private test track at Maranello next to the factory. As for GTB, it stands for Grand Touring Berlinetta, which really was the nature of this Ferrari V12 flagship, while still offering sports car aptitude.

The chassis, as well as the body was all aluminium with a Pininfarina front-end design inspired from the 2000 Rossa barchetta concept and the 2005 GG50 concept cars. 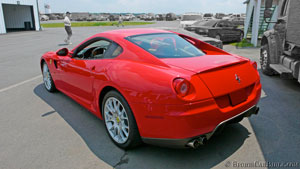 The 599 GTB’s front design with its thin headlights placed on a slightly bulging fender had a folded crease at their tops working in harmony with the two air intakes just below them on the bumper. Between them a massive central egg-crate grill adorned a chromed prancing horse in the middle of it as Ferrari’s laws require it. The hood had a long and wide central bulge spreading all the way up at the windshield base with two air vents on each side of it. For aerodynamic purposes the dual spokes side mirrors reminded you of the legendary flat twelve Testarossa, and more recent the F430 units. On the side front fenders an air-vent design, never seen on a Ferrari before, started from the top front fenders and ended on the door panels, was a fresh addition. In front of the rear wheel arches was a thin air intake, but it was at the top that resided the controversial design element of the 599 GTB, which was two curved flying buttresses supposedly there to ease the side air flow and add 110 lbs (50 kg) of downforce on the rear axle at high speed. 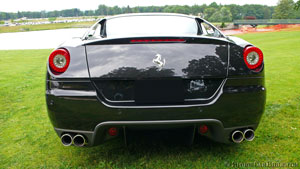 But mostly these flying buttresses added an awkward design touch that Pininfarina’s studio wanted to bank on. The panoramic Corvette-like rear window interlaced with the rear buttresses, and to add more downforce the rear trunk lid ended with a spoiler lip. Gone were the quad-taillights and in were the single round units on each side also seen on many older classic Ferrari designs such as the 250 LM, 250 Lusso and 275 GTB. The four exhaust pipes were divided in the middle by a single large rear diffuser with two vertical slats creating another 353 lbs (160 kg) of downforce at 186 mph (300 km/h) and 419 lbs (190 kg) at full speed. 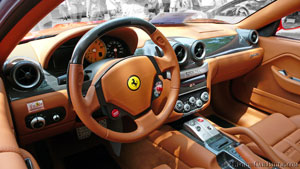 The interior’s fit and finish was as every Ferrari of that era, spot on (it was about time), and the over-protuberant air vents taken straight out of a bad Sci-Fi movie set was the only thing that needed to be readdressed. Aside from that and the overuse of plastic looking carbon fiber pieces everywhere, the dashboard was clear and visible from the half analogue and digital gauges, to the center console with its Bose radio. On the tunnel console you had the choice between the traditional exposed six speed metal gate (rarely seen) or the single clutch, six-speed “Superfast” F1 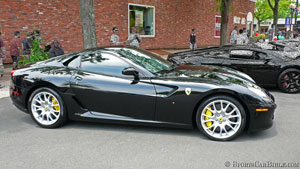 sequential transmission with paddle shifters behind the speed sensitive steering wheel. On top of the steering wheel were five LED changing gear markers allowing you to up-shift in 100 milliseconds, thus half the time of a 575 M F1. Also found on the steering wheel was a “Start” button and the “Manettino” switch used in Formula 1, which was introduced for the first time on a production car with the F430. The Manettino switch gave the driver five driving modes from “Snow/Ice” where the 599 Fiorano was in automatic with full traction control, to the “Race” mode. Under the “Race” mode the traction control (CST) was less intrusive, and the new magnetorheological aluminum suspensions (SCM), reacting on electrical current with their ion fluid, were firmed up by increasing viscosity inside the dampers,

while the transmission was jolted as well as the throttle response. For the bravest, a last mode could be chosen where all driver’s aids were turned off, but the 599 wasn’t as well balanced as the 550 Maranello and could snap at you with a sudden oversteer, while just before spinning around, the front axle would suffer from understeering when entering a tight curve. Behind the deep bucketed seats was a very useful parcel shelf with leather straps to keep your belongings in check giving a nice addition to an already larger trunk than the one found on the previous model. 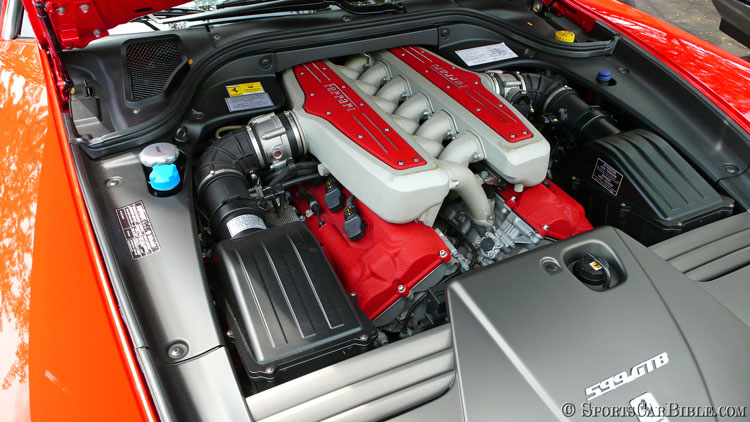 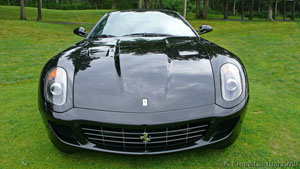 Now for the “piece de resistance”, yes we are talking about the engine, a huge 6 liter (5999 cc/366 cu in) V12 equipped with 48 valves, variable timing on the inlet and exhaust valves. This masterpiece came straight from the Enzo Supercar and developed a massive 620 hp at 7600 rpm with a 8400 rpm redline (650 hp on the Enzo). It was placed at the front of the 599, and as far back as possible from the front axle for better weight distribution. To stay on the weight distribution subject, the rear transaxle transmission also helped provide a better overall balance. With a torque figure of 448 lb-ft at 5600 rpm and a “frying clutch” Launch Control mode, the 599 GTB Fiorano could reach the 60 mph mark from a standstill in 3.7 seconds, but many testers did it in only 3.2 seconds, while the quarter mile time was 11.6 seconds at 128 mph (206 km/h), and the top speed was 205 mph (330 km/h). 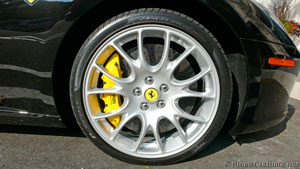 If you often met these numbers on the track you also could opt for carbon ceramic brakes, but the standard steel disc worked great on everyday traffic conditions. To keep the rear-end in line, the “E-diff”, also found on the F430, was replaced by the “F1-Trac” on the 599, which in sport or race mode intervened by collecting data from the wheels to increase traction with power delivery. As mentioned before, the chassis wasn’t as polished as the one found on the 550 Maranello, and could be unpredictable at the limits when all driver’s aids were turned-off with a lot of understeer and then sudden oversteer. 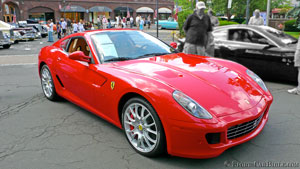 So arriving in 2009, Ferrari announced the “HGTE handling pack” to counteract the problem. The HGTE handling pack included lower and stiffer suspensions with thicker anti-roll bars, and wider front tires with a softer tire compound. At around $30,000 extra, this might have been Ferrari’s responsibility to update and fix the 599 GTB issues, but some will say that the interior’s extra carbon fiber bits and pieces as well as the new 20” split rim just looked plain fantastic.

Again in 2009 the 599 XX program started and was basically a Gentlemen drivers racing formula that led to the creation of the amazing 2010 Ferrari 599 GTO (visit file).

Still in 2009 a one-off creation based on the 599 GTB and named the P540 Superfast Aperta was done by Ferrari’s Portfolio Program division (customizing department) with a questionable golden/bronze finish. The Superfast Aperta was mainly a 599 with a “Targa” roof configuration inspired by the sports car in the 1968 movie “Histoires Extraordinaires”, which was based on Edgar Allan Poe stories. It received a reworked front spoiler, with a front and rear slated side air-vents like on the 275 GTB, while at the back a strong hint of 250 LM couldn’t be denied.

In 2010 Ferrari made an historical entry with its first hybrid concept vehicle. Named the 599 HY-KERS Vettura Laboratorio, this one-off green concept had flat lithium-ion batteries in its floorpan to lower the center of gravity, and a high-voltage electric motor giving it an extra 100 hp. 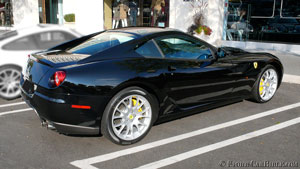 Later on in 2010, Ferrari celebrated Pininfarina’s 80th birthday with the Ferrari 599 SA Aperta, which only was produced at 80 units. The SA stood for Sergio and Andrea Pininfarina, who’s past work have shaped Ferrari’s production sports cars as we know it today. This Roadster version of the 599 received a lower windshield finished in silver, and behind the seats, carbon fiber roll bars were fitted with a reworked floating C post, also finished in silver. The doorsills extended outward a little more due to the chassis reinforcement, and the five spokes alloy wheels were also unique to this model. Aside from the lower windshield, to make it look even more rakish, the stance was also lowered. Not satisfied with this out of the ordinary bodywork, Ferrari gave the SA Aperta the same horsepower as the incredible 599 GTO, for a grand total of 670 ps/661 hp at a higher 8250 rpm. With this extra power, the 599 SA Aperta could sprint to 60 mph in a faster 3.6 seconds, while the top speed was lower with 201 mph (325 km/h) due to its poorer aerodynamics. As far as the soft top goes though, I am afraid that a simple and “just in case you got caught under the rain” light soft-top, as seen on the 550 Barchetta, was your only dry resort. 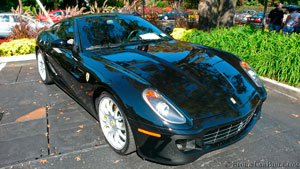 In May 2011, Ferrari unveiled at the Villa d’Este, Concours d’elegance in Italy, a one-off custom car based on the 599. Built for Ferrari collector Peter Kalikow to celebrate his 45th year of Ferrari ownership, this in-house metallic blue personal project was simply called the “Superamerica 45” to evoke the great era of the 410, and 400 Superamerica from the mid 50’s and 60’s. The Superamerica 45 received the 599 GTO’s front bumper, and more pronounced rear diffuser with its three vertical slats. On the front side fenders, a second lower air-vent gave this one-off project an air of C6 Corvette ZR1, while the rear bumper adorned the GTO’s extra side air-vents. Also matching the GTO’s were the wider doorsills with their specific lower aerofoil carbon piece and the five spokes alloy wheels from the SA Aperta were semi color-coded to the body. Like the 599 SA Aperta, the windshield frame, and side mirrors had a metal brushed finish, which also was found on the door handles. Like the 2005 Ferrari 575 Superamerica, the Superamerica 45 was fitted with a swiveling hard-top, here made in carbon fiber with a darker blue tone that lowered itself flat on the reworked rear lid. This reworked panel was now fitted with a rear spoiler, and the visually awkward floating buttresses were now “wingless”, while just ahead the rear quarter windows were dramatically reduced in size.

The interior gained a navigation screen on the center console, and the cabin’s carbon fiber trim had the same blue tone as the swiveling hard-top. Now for the main course, the engine was upgraded to the GTO’s and SA Aperta specifications with its 661 hp at 8250 rpm, making this one-off even more attractive. 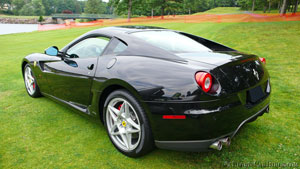 In early December 2011 a special edition of the 599 GTB was unveiled to celebrate Ferrari’s 60 years of F1 wins. Named the 599 GTB 60F1, it was based on the HGTE chassis and was more of a specially trimmed version of the 599 HGTE offered in 3 trim levels than anything else. You could get your 599 GTB 60F1 finished with the 1951 Froilan Gonzalez’s 375 F1 scheme, which was Ferrari’s first F1 win, or 2 other “suspiciously” tacky finishes based on Fernando Alonso’s 2011 F1 car with lighter trim and stripes. All 3 levels of finish adorned 20” diamond-finished alloy wheels and a painted Ferrari shield on the front fenders. As for the interior, it was loaded with Alcantara (faux-suede) and Alutex (metallic fiberglass) with Gonzalez and Alonso’s signatures on a plaque. European specification 60 F1 cars received “Sabelt” bucket seats, while the American market got “Recaro” seats. But maybe more importantly with the 599 GTB 60F1 was the introduction of the “Tailor-Made” program that allows rich customers to choose from a vast array of materials and fabrics within three collections; Scuderia, Classica and Inedita. 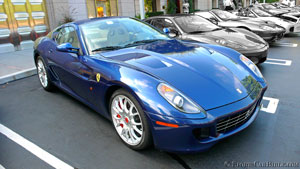 Overall the Ferrari 599 GTB Fiorano was somewhat of a marketing mystery, which took the spotlight away from Ferrari’s top Supercar/Hypercar, the Enzo. Now with flagship models being as performant as the barely used Supercar/Hypercar (also done by Porsche and their Carrera GT vs 997 Turbo), who will spend a million dollars on a Supercar/Hypercar when in no time down the road you could have a better and more road purposeful car with the soon upcoming new flagship… Oh I know, our beloved car investors and speculators!