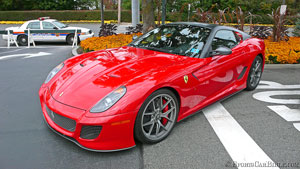 The 2006 Ferrari 599 GTB Fiorano was already in production since four years without really capturing the tifosi’s heart due to its “so, so” looks, and its delicate chassis with prominent understeer. In 2009 the optional “HGTE” handling pack semi-corrected the handling problem, but it sold at around $30,000 mind you. With this constant problem and bulky front engine GT looks, the 599 always fell short when compared to its smaller mid-rear engine Berlinetta brothers, and this couldn’t have been more true then when the 2009 Ferrari 458 Italia was launched. So after the knowledge acquired by the 2009 track only 599 XX program, Ferrari resorted in 2010 to introduce the street legal, slightly watered down version of the 599 XX, the 2010 Ferrari 599 GTO. 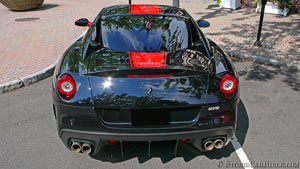 As the nomenclature indicates and as everybody knows, the GTO name had been used by the legendary 1962-63 Ferrari 250 GTO, as well as the first real production Ferrari hypercar, the 1984-86 Ferrari 288 GTO. The GTO nomenclature stands for “Gran Turismo Omologato” or in simple English, it is a hyperactive Grand Tourer production car, which needs to be sold at a certain quantity to pass Homologation for a specific racing class. The homologation status wasn’t a problem for the 599 GTO because it remained a road going Ferrari, but to carry and deserve such a badge it would have to be a seriously composed and ferocious machine. 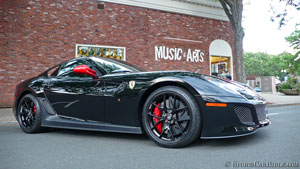 All characteristics of the 599 remained with just more muscular and visual tweaks starting with a more protuberant front hood bulge. The 599 XX’s large hood air-vents inspired the GTO’s beautifully sculpted wide double louvers on each side of the bigger hood bulge. The center front grill on the bumper was now fitted with a meshed screen also found on the bumper’s side air-intakes. To create more downforce on the front axle, the lower and wider front spoiler received a carbon lip. Again to help reduce that front wash in hard cornering the front track was also widened.

Also part of the “no more front wash program” was a wider five dual spoke 20” wheel set fitted with wider 285 mm front Michelin rubber especially made for the GTO which replaced the smaller 245 mm 19” Pirelli P Zero found on the 599 GTB. These drastic changes finally cured the over-washed and understeery nature of the GTB, and mated to a fast and more direct steering, the 599 GTO could at last be driven like any 599 should, or at least on a dry tarmac. The lighter and more effective, second generation carbon ceramic brakes (CCM2) were also new and received a ventilated “doughnut” cast framing the carbon discs front and rear. This updated system taken from the 599 XX helped cool the brakes faster and also increased the aerodynamics. 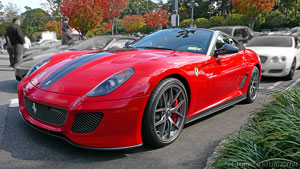 The brake pads were special as well because they included carbon elements, which was a first on a production car, and was also taken from the XX program. On the lower flanks, the doorsills were more accentuated with the help of an aerofoil lip again here to generate extra downforce, and the rear air-intakes just before the wheel arches grew in size. Unlike the 599 GTB, the GTO had its pillars, roof and side mirrors finished in matte black, but also and sadly unlike the 599 XX, the little “L” shaped wings on the floating C pillars were nowhere to be found on the GTO. 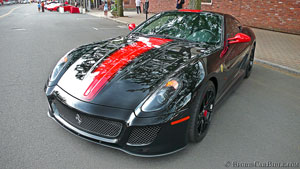 To let hot air escape from the rear carbon ceramic brakes, the rear side bumper received an air-vent just after the rear wheel arches… this had also been done on the famed 250 GTO. At the back the rear spoiler on the rear lid was more pronounced, and the reworked rear diffuser, all finished in matte black, was more accentuated with three vertical directive slats instead of the two found on the GTB. The total of this aerodynamic package helped create a total of 317 lb (144 kg) of downforce at 124 mph (200 mph), while the 599 GTB “only” managed 353 lb (160 kg) at a much higher 186 mph (300km/h). 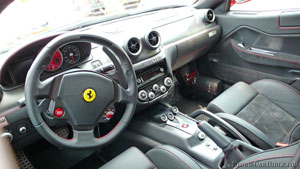 The interior’s quality was as every Ferrari of that era, spot on (about time), and the only thing that needed to be readdressed was the over-protuberant air vents on the dashboard taken straight out of a bad Sci-Fi movie set. Aside from that and the overuse of “plasticky” carbon fiber trim, the interior felt right from the half analogue and digital dials, to the center console with its radio delete. On the tunnel console the three buttons to set the transmission into auto, reverse and launch control mode were recast in the identical design layout as found in the California. On the steering wheel five LED lights at the top were here to show you when to up-shift without having to look at your instruments, like in a F1 car. Also on the steering wheel were longer carbon fiber shifting paddles, and to stay on the F1 subject, a little plaque on the left of the dashboard stating Ferrari’s 31 F1 World Titles, reminded you of Ferrari’s race heritage… brain washing time! 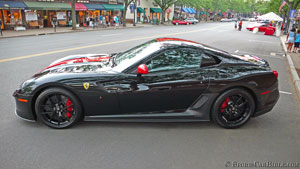 The very fast and improved single clutch, sequential F1 transmission now could up-shift in 60 milliseconds instead of the 100 ms time found on the GTB, while it downshifted in 120 ms. Also found on the steering wheel was the start button and the usual “Manettino” switch, but in the GTO’s case, the “Ice” mode was replaced by a “Traction Control Off” mode. In the binnacle, the driver’s interface was updated with the Virtual Race Engineer (VRE), which gave instantaneous information to the driver on the GTO’s performance. 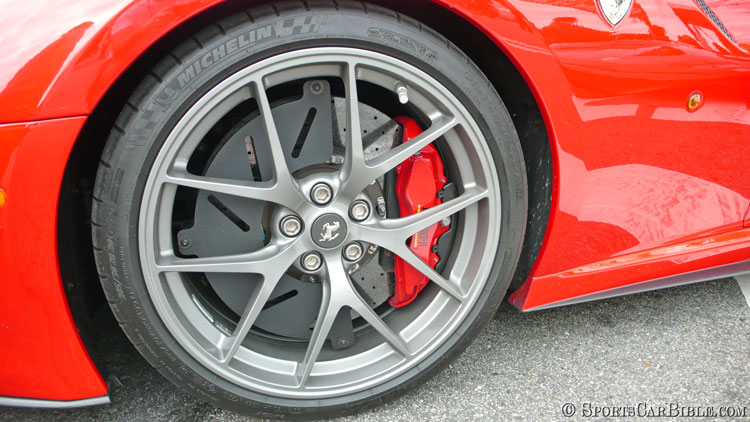 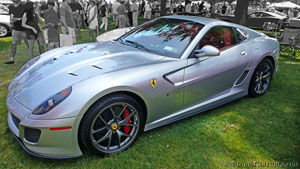 Also what helped the GTO to be quicker, aside from the extra found power, was a weight reduction of 187 lb (85 kg) over the GTB. The extra pounds were not only shed by the use of more carbon fiber trim here and there, but the aluminum body panels and glass were actually thinner as well. 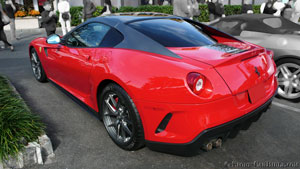 Again to improve handling, the second generation of the “Magnetorheological” aluminum suspensions (SCM2) reacting on electrical current input with their ions filled-up fluid at about a thousand times every second, and the Vehicle Dynamic Control (VDC) gave the GTO more fluidity when ran through its pace, as long as you respected its power output. Meanwhile putting the power down from a standstill meant that the GTO could rocket itself to 62 mph in 3.35 seconds… like a 458 Italia. This made the 599 GTO the fastest production Ferrari ever in terms of acceleration, while the top speed reached a blistering 208 mph/335 km/h (Enzo’s top speed, 217 mph/350 km/h). 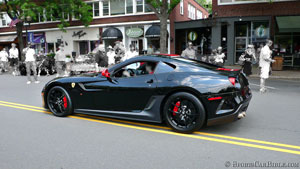 But what separated the 599 GTO from the GTB Fiorano, also equipped with the F1-Traction Control and other electronic toys, was that the GTO’s computers were not only here to save you from crashing, but they now were here to make you go faster as in the 458 Italia.

As for the price tag, well priced at around 50% more than the “standard 599 GTB” this didn’t seem to bother the 599 owners of this limited edition, who all placed their orders before the GTO even was displayed on the showroom floors.