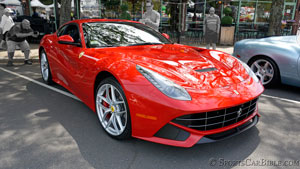 After the 2006-2012 Ferrari 599 GTB Fiorano, the famous Italian car maker was ready to unveil its 3rd front engine flag ship V12 from the 550/575 Maranello with the ferocious Ferrari F12berlinetta at the 2012 Geneva Motor Show. The Ferrari 599 GTB had grown into a very powerful (620 ps / 611 hp) but large Grand Tourer and with this in mind Ferrari wanted to regain the sense of “compactness” experienced with the 550/575 Maranello. 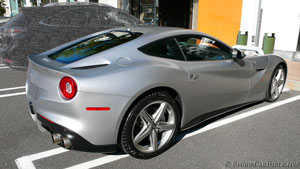 As the new norm since the 360 Modena, the F12 is built based on an aluminium space frame chassis with the body also made in aluminium. Pininfarina was again called in for duty and drew the F12's dramatic but still classic Coupe design unlike the flamboyant Lamborghinis. The F12's front grill is wide as often seen lately (California, FF), but unlike the “village idiot” smile of these former models, the grill extremities are chiseled upward giving the F12 a more serious and menacing appearance. 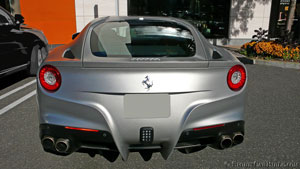 Underneath the grill a front wing helps plant the nose down at speed and on each side of it “Active Brake Cooling” flaps stay closed to reduce drag when not needed, and automatically open up when the monstrous carbon ceramic front brakes need cooling (CCM3). The F12's long LED headlights are maybe the most expressive units that Ferrari has offered so far and on the center of the hood an air-vent instead of the usual air-scoop is a refreshing change. But the real change came from the “Computational Fluid Dynamics” or CFD as referred from Ferrari. 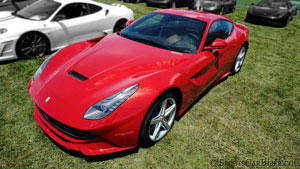 Ferrari’s CFD is the creation of intricate aerodynamics body shapes and air channels aside from the traditional front/rear spoilers/wings and undertray venturi/rear diffuser package. As on the 458 Italia and its in and out body air channels around the headlights, there to create extra downforce, the F12 Berlinetta also uses the same aero trick, but in a grander scale with two wide channels starting inward at the headlights and wrapping themselves inside the front fenders after the wheel arches. The F12's air channels continue along the doors to end upwards by the door handles. This section called “Aero Bridge” not only creates more downforce on the front axle, but it also gives less drag on the flank section by freeing air accumulation generated from the wheel wells. 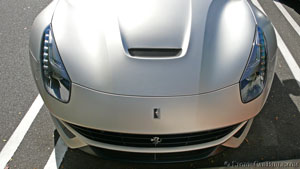 Seeing from the profile, the F12's air channel coming out of the Aero Bridge has such an accentuated curved line all reinforced and prolonged by the rear fender belt line that it really added flavor to, what could have been a too conservative front engine coupe design. However, in perfect Pinin Farina fashion the F12 still remains a mature and classic purposeful looking V12 as only the biggest Italian design house can do. At the back the fastback rear window opens as any hatchback would to access the trunk and parcel shelf, while two screened air-vents are located on each side of the rear window base. 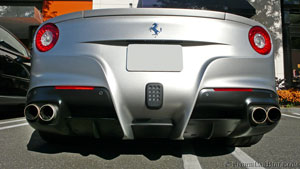 The F12's rear panel is aerodynamically sculpted in a broad “V/T” shape to quickly extract as much air as possible out of the very accentuated rear diffuser. At the center, just above the rear diffuser a gimmicky “F1” style rear fog light with the traditional dual-tailpipes can be seen at each corner. With all those aerodynamic applications, the Ferrari F12 Berlinetta is able to not only be twice as efficient through the air as the 599 GTB with a cd of just 0.299, but it also generates 76% more downforce at 200 km/h (124 mph) than the 599 with a total of 123 kg / 271 lb of down pressure. 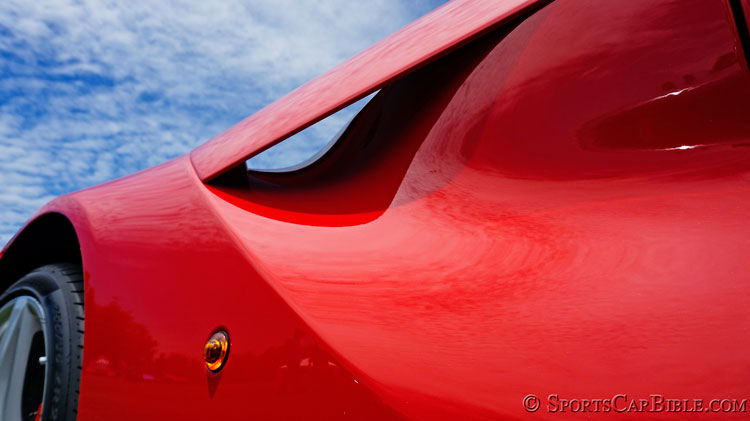 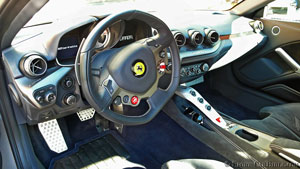 Inside the Ferrari F12 you sit lower than on the 599 and a beautiful but somewhat loaded with buttons and dials cabin gives joy to the owner with the same all “buttoned-out” steering wheel that you would find on a 458 Italia including its Manettino, which allows you to change the driving characteristics of the F12 on the fly. In front of the driver’s seat and its luxurious Frau leather, the binnacle houses an analogue rev-counter with a digital read-out of your selected gear, and on each side a digital screen allows you to check via the infotainment system pretty much everything from all your settings, engine running status and F12's navigation. 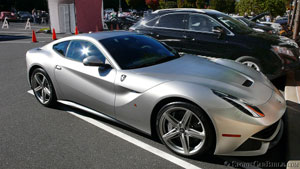 At the center, three round swivel air-vents made from aluminium and carbon fiber are the talk of the town, as well as the optional and not so needed auxiliary passenger data read-out which gives your brave passenger info on the speed, gear selected and revs of the F12’s power plant. The tunnel console, in which a cup holder was added, receives a brushed aluminium bridge where the three transmission button modes (R, Auto, PS) are found as well as the “warning” button below. At the F12's back a convenient and generous parcel shelf with holding straps can manage to hold your golf bag if that is what you are into, but for others maybe a fire suit and a helmet are more the thing “du racing jour”. 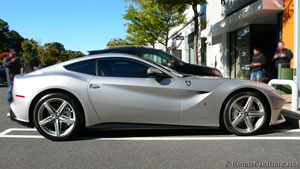 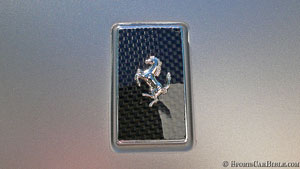 At Ferrari’s Fiorano race track the F12 Berlinetta was able to lap the famous track 3 seconds faster than the 599 GTB and 1 second faster than the 599 GTO for a 1mn 23sec time lap making the Ferrari F12 the fastest production Ferrari to lap Fiorano before “LaFerrari” was released. This performance is possible with the help of the mountain of power available with the F12’s V12 and aerodynamics, but also by the F12’s weight reduction over the 599 GTB by a claimed 70 kg/154 lb. But these must be Italian kilograms and it seems that for the rest of the world it looks more like a 58 kg/128 lb weight saving. 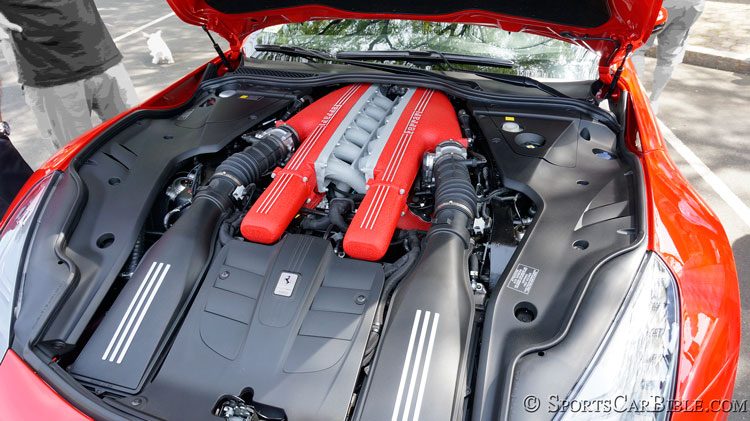 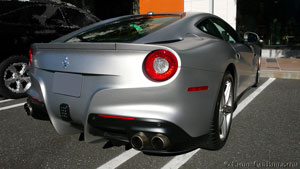 With all this power the Ferrari F12 Berlinetta needed some help to put its muscle to the ground and save you from sending your precious F12 into the ditch. So as usual the ESC (Electronic Stability Control) and F1-Trac (traction control) are standard, while the 3rd generation of electronic differential (E-Diff 3), also standard, is controllable via the Manettino. The Manettino not only changes the differential’s behavior but it also changes the ride quality by altering the Magnetorheological dampers (SCM-E) transforming the F12’s behavior from a Grand Tourer if you felt like it to a ferocious Sports GT. 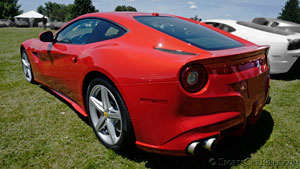 And a Sports GT is what the Ferrari F12 Berlinetta really is with its insane power and fast reacting but sharp steering responses. As usual pure power is nothing without stopping power and as mentioned, the Ferrari F12 has plenty of it with its massive all around carbon disc brakes (CCM3) with 398 mm at the front and 360 mm at the rear. But not to be left alone doing the hard braking work, High-Performance ABS and EBD, which the latter one distributes braking force across the four wheels where braking is most needed are very welcome additions. 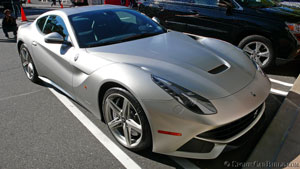 After all is said and done this V12 Ferrari flagship represents an immense evolution over the previous 599 GTB, and its already mind bending 620 hp and 670 hp GTO street racing brother. This is not just from a pure display of power point of view, but also from its size factor which gives the Ferrari F12 a more practical day to day offer than the 599 GTB.