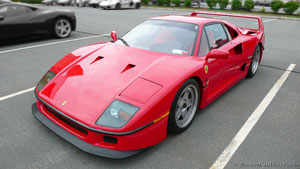 To celebrate Ferrari’s 40th year of manufacturing road-going sports cars, Enzo wanted a new ambassador to represent this event. The other good reason to do so was also to bring back the world’s best Supercar crown, taken away by Porsche earlier in 1987 with their technological masterpiece, the Porsche 959. Based on the 288 GTO and more specifically on the five 288 GTO “Evoluzione” prototypes, Enzo unveiled himself his last creation in 1987 with the now legendary Ferrari F40. 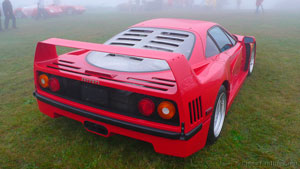 The F40’s chassis was a tubular unit with a 2450 mm (96.4 in) wheelbase, giving it the same wheelbase as the 288 GTO. An all independent suspension with massive ventilated disc brakes at each corner were then fitted all around. Pininfarina was again called to dress the F40, which was mainly built out of Nomex, Kevlar and Carbon fiber to minimize weight. But at 1235 kg (2723 lb) in Europe, and 1350 kg (2976 lb) for US models, it was a little heavier than the 1100 kg (2425 lb) claimed by Ferrari. The whole front-end was executed in one panel with turning signals and parking lights under a clear covered element. Just above them was a pop-up headlight with further up two NACA air intakes providing fresh air into the AC unit. The front fenders weren’t flush with the doors and stuck outward to reveal a front brake air vent. On the first fifty F40s the side windows featured a race inspired sliding Plexiglas piece, but it was rapidly replaced 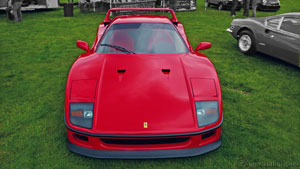 by a proper roll down window. The rear buttresses had an air intake at their base channeling fresh air into the turbochargers, while another large triangular air intake scoop on the rear quarter panels that started from the doors like on the 308/328 series fed the intercoolers. Just below it by the rear wheel arches and the doorsills was another NACA air intake placed there to cool the rear disc brakes. Another pair of NACA air intakes were located on the single piece clamshell opening engine lid to cool the engine and gearbox. 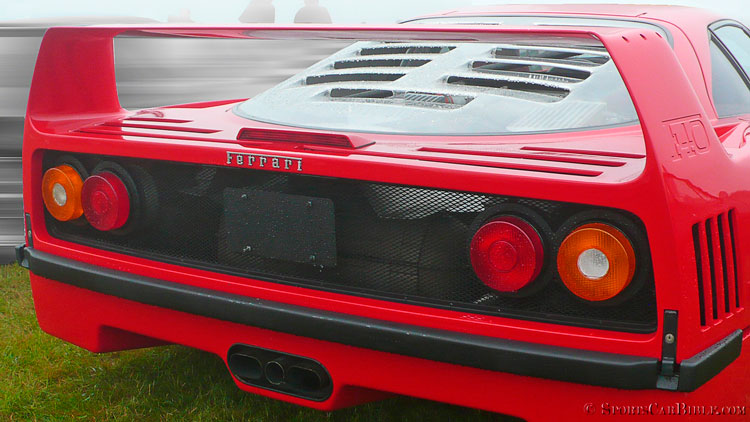 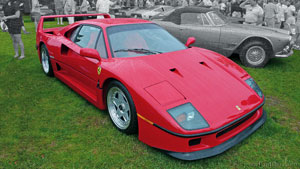 But the major attraction on the F40 was its monumental and “maybe” overdone rear wing with a depressed “F40” lettering appearing on the right rear wing pillar only. This massive wing gave the necessary downforce for this powerful rear wheel drive monster to grip to the asphalt but it also surpassed in terms of presence and drama the Porsche 959. All the way at the back on the lower side fenders was a visual cue taken from the 288 GTO, with four vertical louvers to release hot air from the engine bay and rear brakes. But on early F40 posters showing a pre-production F40, five louvers were seen even if this layout never made it into production. The engine was covered with a clear heat resistant Lexan panel with eleven louver 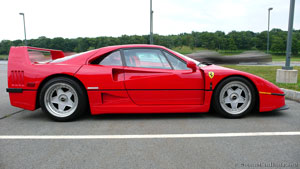 s punctured on it to allow the heat generated by the engine to be released. This also gave the voyeurs the opportunity to be mesmerized by the F40’s guts. Also on the engine lid and just under the high rear wing was a series of six wide slatted openings again for cooling purposes. To not confuse this Supercar for another mad Italian creation, the two unmistakable sets of round taillights “a la 308/328” were placed on a rear black meshed screen also here to help cool this fully gilled monster. Underneath it a cluster of three exhaust pipes with the outside pipes being oval and the middle one round was placed at the center of the rear valance. Two undertray venturi gave the F40 a proper rear ground effect for better stability at high speed and 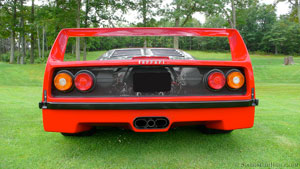 grip during fast cornering. This task was also achieved by the adoption of the world’s widest tires at the time. These tires were specially conceived for the F40 by Pirelli and called the P Zero. A 335 mm (13.98 in) wide rubber at the back with three different rubber pattern sections could handle with its asymmetrical treads high speed figures, hard cornering, while also having the ability to drain water out. These bad boys were mounted on a set of menacing 17 inch five spoke Speedline split-rim alloy wheels also part of the F40’s raw image. 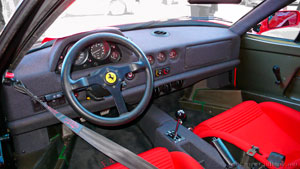 The interior was minimalist at best and all were made into left hand drivers only. On the floor, rubber mats were not what you could call comfy, and the same could be said for the drilled pedals, but cruising around wasn’t the F40’s forte, even if this street racer mastered that aspect as well. As for the dashboard, covered with anti-reflective material, it had the same layout design as the 288 GTO with an “A” shaped binnacle housing four gauges. Another three auxiliary gauges were placed at the center of the dashboard just above the simple two dials AC/heat control unit. The tunnel console only adorned an exposed five-speed dog-leg (1st bottom left) metal gate gear lever, and a small storage space for personal items. The heavily bucketed seats were custom molded to the owner’s body and were covered with a “non-sliding” red fabric all laid over a Kevlar structure. The Kevlar door panels were finished in red with a column of slats by the hinges on the first “rally style side window” F40s, as for the later on “roll down window” F40s, they received a non-slatted black Kevlar finish.

Unlike the 288 GTO, the Ferrari F40 was available in the United States as long as you liked red as the rest of the world did. But unlike other markets, the Federal F40s had a longer front spoiler splitter, a thin rubber strip on the front and rear bumpers (for who knows what), side rectangular light markers on all fenders, and no rear fog lights, but a third brake light on the engine bay lid.

These numbers gave the F40 the title of the fastest production car in the world, just before the Lamborghini Diablo came and ruined its parade three years later. Built until 1992 the Ferrari F40 was supposed to be produced at 400 units only, but speculation and greed made this number climb to a much larger 1311 units, excluding the first 5 prototypes and the 19 F40 LM racing cars. Sadly on August 14th 1988, Enzo Ferrari died, making the F40 the last car that Enzo commissioned and unveiled under his command. His passing, glorified by the F40, created a speculating frenzy over everything adorning the prancing horse logo on it, and ultimately skyrocketing the whole classic car market until the early 90’s.

Ferrari F40 - Here's the monster... 2.9 l (179 cu in) 90˚ V8,
quad-cam 32 V, 2 Turbos and 478 hp @ 7000 rpm.
Ferrari F40 - Legendary 335 Pirelli P Zero at the back on a
17 inch Speedline split rim wheel... oops we have Michelins here.
Ferrari F40 - Depressed "F40" lettering on the
right side only and 4 rear louvered air-vents
which was 1 more louver than the 288 GTO.
Ferrari F40 - NACA air intakes galore... a real Jet for the road.
Ferrari F40 - The front brake air-vents are not here for show and the same goes
for the extended doorsills here to "link" the wide fenders to the slimmer body.
Ferrari F40 -Very light front-end
ready to swallow ALL your luggage.
Ferrari F40 - Unusual dual headlight layout with one light cluster
under a clear cover and a pop-up unit just above. Here's a
Federal F40 with its extended turning signal and front splitter.
Ferrari F40 - Very light and strong Kevlar
panels even used for the fuel filler cap.
Ferrari F40 - For your eyes only... heat resistant Lexan rear window.
Ferrari F40 - Legendary wing, copied many times over by tuners.