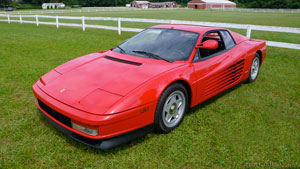 It is 1984 and it has been 10 long years that a legion of young boys’ bedroom walls were covered with posters of the outrageous Lamborghini Countach. So in 1984 it was time for Ferrari to regain the exotic sports car crown with the now cult Ferrari Testarossa.

The “Testarossa” (Red Head) name was of course revived from the multi Le Mans race winner from the late 50’s and early 60’s, giving you a sense of how determined Enzo was in producing a new meaningful 12 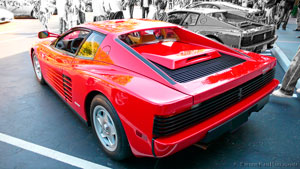 cylinder flagship. The 512 Berlinetta Boxer had been the first production mid-rear engine Ferrari with a flat 12 cylinder (180˚) engine, and it would become the base for the Testarossa with its updated longer wheelbase tubular chassis now 2550 mm (100.4 in). Although unlike the Berlinetta Boxer and its “dirty” engine, the Testarossa received a “cleaner” flat 12 cylinder allowing it to pass the American emission restrictions and conquer the United States. 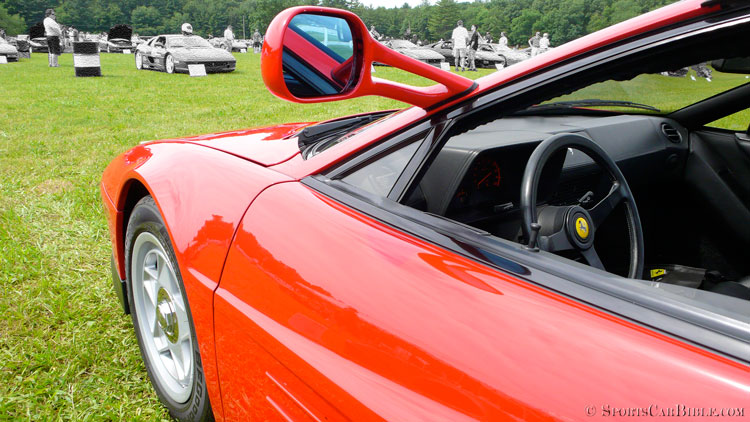 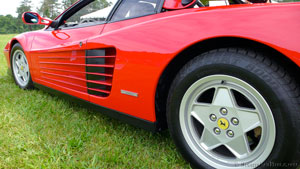 Pininfarina drew a very charismatic and dramatic car, but still remained mature and graceful as Pininfarina is best known for, unlike some other childish exotic sports car. The front black grill almost adorned identical large turning signals and parking lights combo on each side as the Ferrari 328 and Mondial 3.2/T. Also at the front, a black splitter with only a left air intake scoop feeding air to the AC unit and the ventilated disc brakes looked unbalanced. The pop-up headlights housed two round lamps on each side, and the single side mirror found on the driver’s side had an artistic and aerodynamic dual stem mirror support fitted at mid-height of the A pillar. This strange decision of fitting only one side mirror gave the Testarossa an asymmetrical and awkward look. 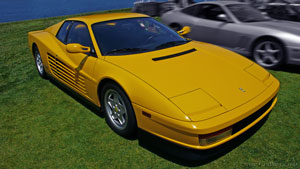 The piece de resistance came from the side rear air intakes located on the overly extended rear fenders, which started from the door just underneath the side mirrors and gradually got wider towards the back. These massive air intakes housed five horizontal long slats, giving an undeniable artistic touch to the Testarossa, and gave at the same time some down force to keep this wide terror on the ground. The rear quarter side windows ended abruptly where the rear buttresses began, while in the USA the louvered engine lid adorned a third stopping light as well as rectangular light markers on each fender. The extremely wide 77.8 in (1976 mm) rear-end was also a novelty with rectangular tail lights shaded by a series of five 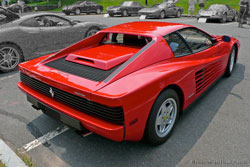 black horizontal slats covering the entire width matching at the same time the massive side slats. This visual trick, added to a flat engine lid, made the Testarossa appear even wider than it already was. As Italian tradition dictated at that time, four exhaust pipes were located under a body color coded bumper, while a slatted air vent matching the ones found on the tail lights was placed between them. To complete the Testarossa’s design a set of five spoke alloy wheels received a single central locking nut. 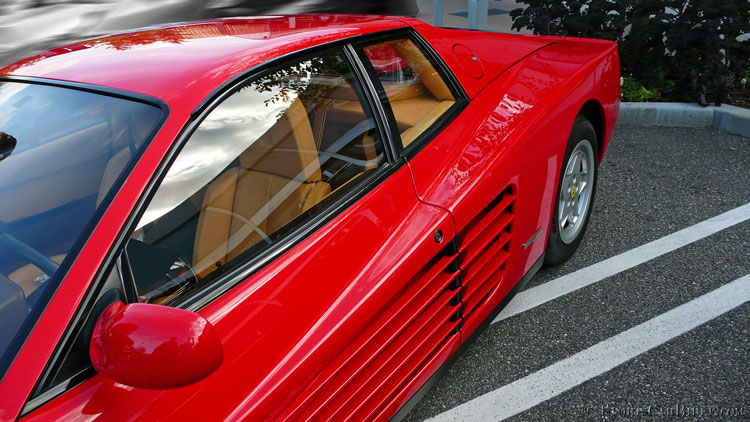 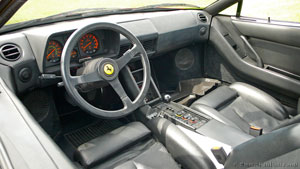 The Testarossa's interior was a plastic palace, with switches and dials coming directly from Fiat’s parts bin. The binnacle was retained from the 512 iBB with orange numberings, and the center console housed two smaller dials with all the window and heat/AC switches placed on the tunnel console. The five-speed dog-leg (1st bottom left) exposed metal gate gear lever gave action to a transmission placed underneath the engine to keep the rear compact. 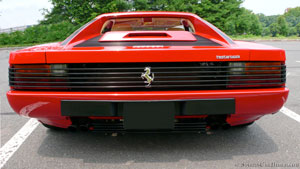 Like the open racer of the 50’s, the cam covers were painted red, giving the Testarossa its name. To facilitate the maintenance of the “Red Head”, and reduce noise and vibration, the engine was placed on a subframe, which was then bolted to the chassis. The previous flagship Ferrari with 12 cylinders, the 512 iBB, had a 5 liter, 12 cylinder engine laying flat at 180˚ in front of the rear axle and was retained for the Testarossa. But in the Testarossa, the dual head-cam per bank received four valves per cylinder instead of two, for a total of 48 valves. Developing 390 hp at 6300 rpm, it only took 5.2 seconds to reach 62 mph from a standstill, while the top speed was 180 mph (290 km/h). All this speed was achieved in relative comfort and ease compared to the exiting BB models. 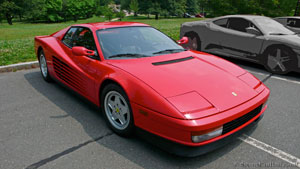 In 1986, Europe received a catalytic exhaust and power went down to 370 hp, but a year later in late 1987 as the 1988 models arrived, some good news came. First seen in USA with the adoption of two side mirrors this time placed at the base of the A pillar, and second, new five spoke alloy wheels were now held with five bolts, giving altogether a more pleasing and up to date look to the Testarossa. 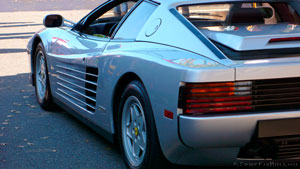 The last year for the Ferrari Testarossa came in 1991 after 5,648 cars had been sold, except for the white example seen on “Miami Vice”, which was given to the TV show by Ferrari, after the producers had to put away the fake Daytona Spider based on a corvette. But it also gave Ferrari and Pininfarina a sweet success by finally adorning young boys’ bedroom walls with Testarossa posters.