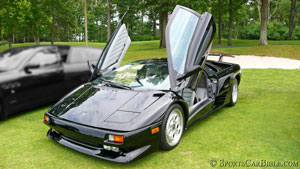 After 16 years of loyal service, the Countach was replaced in 1990 by the Diablo, who’s development project number 132 had started with the Mimran brothers. In 1987 Chrysler became Lamborghini’s new owner and asked Marcello Gandini to once again design Lamborghini’s Supercar. Chrysler wasn’t too keen on Gandini’s original angular design for the Diablo so decided to redesign in house Gandini’s dramatic lines into a much softer and sensual Supercar. This apparently made Gandini so mad that he later offered his initial drawing to Cizeta who brought us the Moroder V16T in 1991. 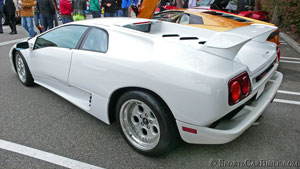 Based on a tubular spaceframe chassis with independent wishbone suspensions all around, the Diablo’s lines were macho oriented like the Countach but smoother and curvier without the huge childish flared wheel arches found on the previous model. It had a compact nose pointing straight to the ground, with pop-up headlights and two little air scoops on each side of the hood by the windshield. 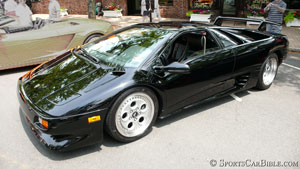 The side mirrors were particularly unique with their horizontal position and dual stem where the side windows plunging down and gave a greater dimension as well as creating a more compact front-end. The front spoiler was deep and adorned two square driving lamps on each side with a tiny air intake next to them. Just above it, the turning signals and parking lamps were encased in the body color coded bumper. 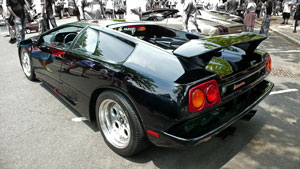 A long feline lower air channel on the doorsills ended in a horizontal three slatted rear air intake by the wheel arches. Just above it and unlike the Countach, the rear quarter window could be seen out of. Continuing on the rear quarter window a thin air intake was almost concealed, while a more prominent one was fitted on top of the rear fenders and looked like it could give wings to our Diablo. As in the Countach, the rear engine lid was recessed from the long slanted buttresses and was fitted with height cooling louvers. At the back, the tail lights had two round light patterns like 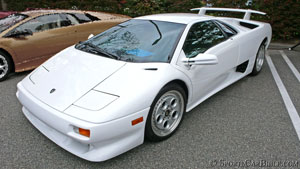 the Jalpa and were set in a red reflective background. The rear bumper was chiseled at its top and acted as a downforce device while looking good doing it. Underneath the bumper, the usual quad-exhaust tips were more than expected. Also, as in the Countach, you could ruin the lines of your Diablo by ordering a huge rear wing. To complete this design the two piece 17” OZ Racing five hole alloy wheels also reminiscent of the Countach wheel design were fitted with the latest, stickiest and widest Pirelli P Zero with 335 mm rubbers at the back…. as on the legendary Ferrari F40. 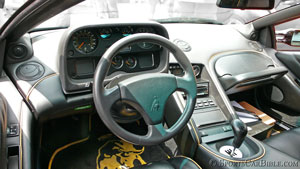 The Diablo's interior was clean with a slanted center console housing the radio, AC/heat controls and window switches. The five speed gear lever and its exposed metal guiding gate was located on the tunnel console for anyone to see. The binnacle was high and displayed two levels of dials with two digital screens on the lower dial level. As the previous model, the Diablo had inviting “banana” styled bucket seats that almost gave you a lay-down position. 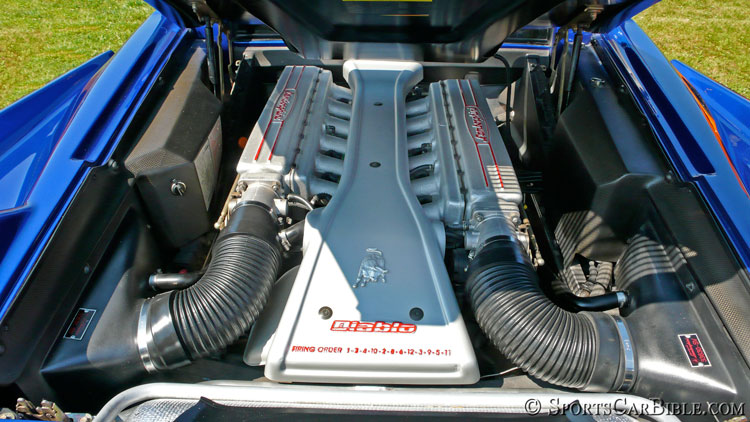 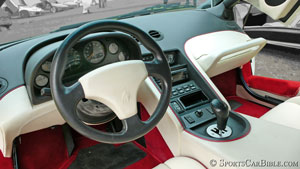 In 1993 the Diablo VT was introduced and had a four wheel drive system (Viscous Traction) that could transfer up to 25% of the torque to the front wheels when the rear wheels lost grip, making this devilish ride a more grounded one! Also starting on the Diablo VT, a lower and revised dashboard design was introduced improving the driver’s front visibility. 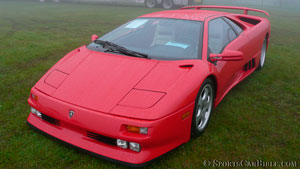 Lamborghini celebrated their 30th birthday a little late with the Diablo SE 30 in 1994. The SE 30 (150 Special Edition) had a metallic purple finish (other colors upon request), horizontal slats on the deeper front spoiler, the Lamborghini emblem was placed on the front bumper, the body color coded side mirrors were a good touch, and the rally inspired side windows meant business. The now bigger doorsill air intakes received two vertical slats, a repositioned reverse and fog light onto the rear bumper, four large slats covered the engine lid as on the Miura, a rear wing was standard, and to finish a one piece alloy wheel set with the traditional five hole pattern completed this birthday present. 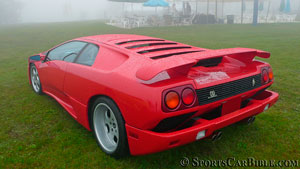 As all Diablos, the interior was now fitted with a lower one level binnacle only. The SE 30 had no AC, no power steering, but did have carbon fiber seats with four point harnesses. The engine had a remapped fuel injection, free flow exhaust, and a magnesium intake manifold to produce 525 hp at 7000 rpm. It also shed 276 lb (125 kg) over to the original Diablo and an even more staggering 386 lb (175 kg) difference over the Diablo VT. And unlike the VT the Diablo SE 30 didn’t have the more secure all wheel drive system, but a good old rear wheel drive transmission giving you more steering feel and tail happiness.

If you were not satisfied with the Diablo SE 30 (150 produced), the 1995 Diablo SE 30 Jota could be yours if you were one of the lucky 15 customers to get your hands on one. Differentiating the SE 30 from the SE 30 Jota were two air scoops on the roof panel giving the necessary extra airflow to the engine’s new found power of 595 hp at 7300 rpm. But by the same token the roof scoops completely blocked the rear view. Performance went up with a very fast 4 and 3.9 seconds to get to 60 mph respectively for the SE30 and SE30 Jota, while the top speed was 206 mph (332 km/h) and an insane 211 mph (340 km/h) for the Jota. 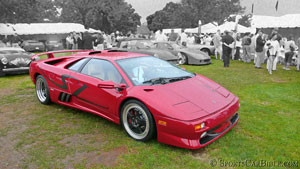 1995 also saw the introduction of the Diablo SV (Super Veloce). The Diablo SV was a stripped down lighter two wheel drive only Diablo, which could be sometimes seen with a huge and tacky “SV” logo on the side. The front spoiler was new and only housed a single driving lamp on each side,

but the biggest transformation came from the use of the 1989 Nissan 300 ZX headlamps, while the dual roof panel air scoops from the SE 30 Jota were also added on the SV. Outside the two piece 18 inch five spoke wheels with their black center piece were new. The V12 produced 510 hp at 7100 rpm on the Diablo SV, and just for the USA a limited edition called the “Monterey SV” was built at only 20 units that same year 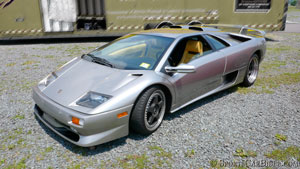 Still in 1995 if you wanted to represent Lamborghini on the track your wish finally came true with the introduction of the Diablo SV-R built at 32 units and developing 540 hp. 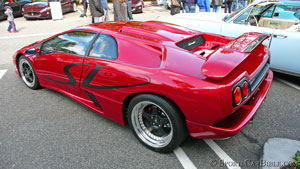 The SV-R was stripped down of pretty much everything; the NACA air scoops replaced the headlights, a deeper front spoiler could be seen, five spoke OZ racing wheels, a large rear wing, and Rally inspired sliding side windows were all business. The SV-R would be the genesis for the GT1, GT2 and GTR racer from 1996, 1998 and 1999. 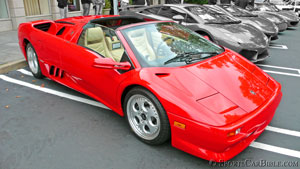 If the Diablo wasn’t exotic enough, you could buy in 1996 the “Roadster” version, which was more or less a Diablo “Targa”. 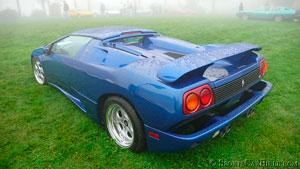 Audi became Lamborghini’s new owner in 1998, this change was of a great importance not just because Audi has the means and vision as a car manufacturer, but also it had great engineering and know how unlike its previous Indonesian/Malaysian owners. 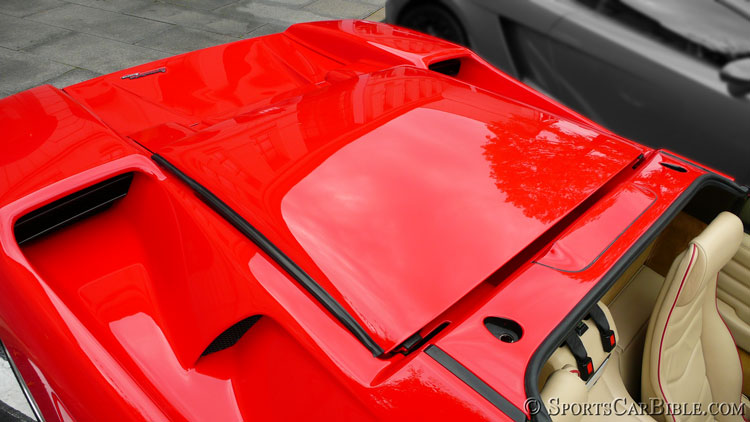 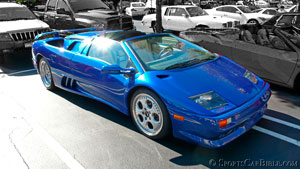 In 1999 Audi introduced the second generation of Diablo Supercars. With this the 1989 Nissan 300 ZX headlights were now standard on all Diablos, the chassis was reinforced with carbon fiber, a material also shared with some body panels even if the roof remained in steel. Finally, ABS (anti-lock braking system) was fitted on bigger discs with 18 inch wheels, which was more than past due.

Inside, the dashboard was redesigned into an arched shape, a carbon fiber background housing seven dials, including the clock, and their deep polished metallic bezel was up to date in a big and artistic way. To finish it all, a more minimalist three-branch steering wheel made the interior come together as a whole. As for convenience, the good news came from an improved AC unit, which was also due and made the Diablo’s ride with the new dashboard a big improvement in practicality and front visibility.

The last news for 1999 came with the launch of the Diablo GT, which was a ready to race but street legal rear wheel drive Diablo available in Europe only and produced at 80 units. The Diablo GT was fitted with a 6 liter (366 cu in) V12 developing 575 hp, which could sprint to 60 mph from a standstill in 4.5 seconds.

That same year and for the United States two limited editions produced at 12 Diablos each came under the form of the Diablo Alpine who had great Alpine navigation and stereo equipment, and the VT Roadster Momo fitted with special upholstery, four point seatbelt harnesses and tacky Momo chromed wheels. 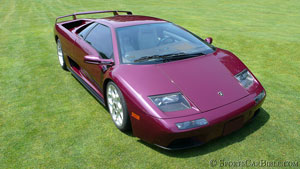 Still in 1999 the Diablo GTR was again an attempt to gain track recognition with only 40 built with the 6 liter (366 cu in) V12 producing 590 hp on this furious Diablo that could top 216 mph (348 km/h)! The GTR came with a full roll cage, a massive rear wing and five spoke OZ Racing wheels making it look a bit like a McLaren F1 LM especially in orange. 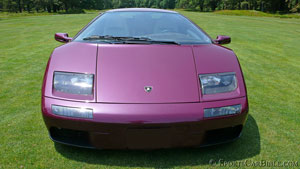 But the best of the bunch was kept for last with the superb 2000 Diablo VT 6.0. The VT 6.0 was re-designed by Audi’s Belgium head designer, Luc Donckerwolke, with a new bumper more flush to the front-end’s line including a bigger and clear flush turning signal, while on each lower side of the front spoiler a major air intake with a tiny optical light lens inserted made the Diablo look younger and more powerful than ever. The smoother one piece five hole wheel set was also new and reflected the modern and clean look of the car. The tail lights were replaced by two traditional round lamps on each side, which fitted nicely into the refreshed design, while the two large lower central exhaust pipes replaced the older quad system. As a VT it had all wheel drive transmission but a rear wheel drive version was also available. 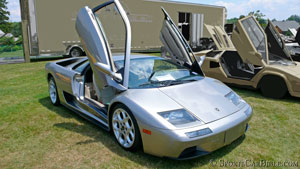 In 2001 the Diablo VT 6.0 SE was introduced and was offered at 40 units. Half of them received a metallic gold finish (Oro Elios) and the other half were done in a dark maroon (Marrone Eklipsis). The interiors were then respectively matched with a specific taupe or chocolate tone leather seats and carpet; carbon trim and Alpine stereo/navigation system were also part of the package. Both VT 6.0 Diablos adorned an enlarged 6 liter (366 cu in) V12 now developing 550 hp at 7100 rpm. These 6 liter Diablos were good for a top speed of 208 mph (335 km/h), while the 0-60 mph was done in a mind bending 3.9 seconds. 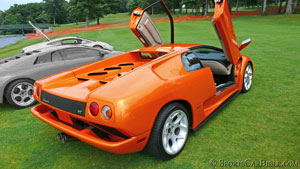 Many different versions were made with little tweaks here and there to milk the Diablo as much as possible until 2001, but the most radical and harmonious changes would come with the Diablo VT 6.0. The Diablo would be the last of the ultra macho Supercars in the world which Lamborghini was king at producing since the Miura. The next Lamborghini generation would still be king of the exotic cars but thanks to Audi it would have a more sensible and practical side to it. The Diablo was also the last Lamborghini that Ferrucio Lamborghini witnessed, he passed away in February 1993. 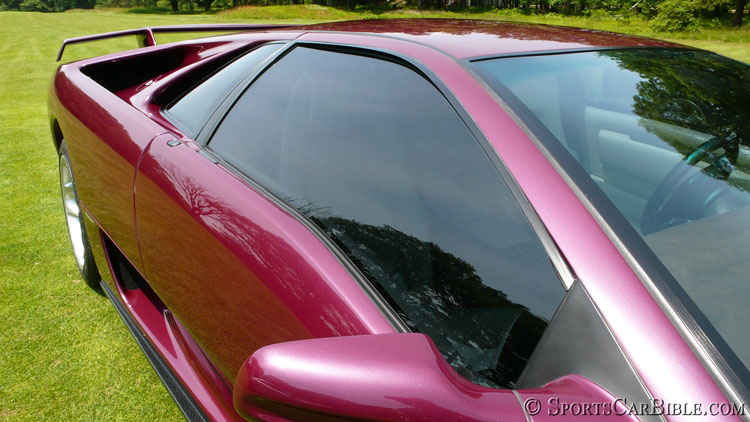