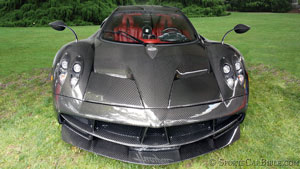 It is a rare sight to see a new Hypercar manufacturer being born on the verge of the 21st century and not only survive, but succeed and be recognized in this tight circle and in such a short time. Pagani was founded in 1992 and is located in Modena Italy where many other exotics and cult manufacturers had been here all along for decades. After producing their acclaimed first Hypercar, the “Zonda”, for 12 years from 1999 to 2010, Pagani launched their second Hypercar in 2011, with the Pagani Huayra. 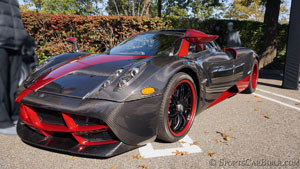 The Pagani Huayra, or project C9, started in 2009 but unlike the Zonda, the Huayra was this time named not after a powerful wind, but the South American Wind God, Aymara Huayra tata. Heavily based on the extreme Zonda R, the Pagani Huayra received a very advanced unitary chassis made out of Pagani’s new and stronger exotic material… carbon-titanium. This Pagani invention of meshing carbon fiber and titanium was introduced in 2008 on the Zonda Cinque. Aside from being stronger than carbon-fiber alone by resisting shearing during collision, it also is a great technological marketing tool to catch the rich egocentric thinking that carbon-fiber is too common for him. 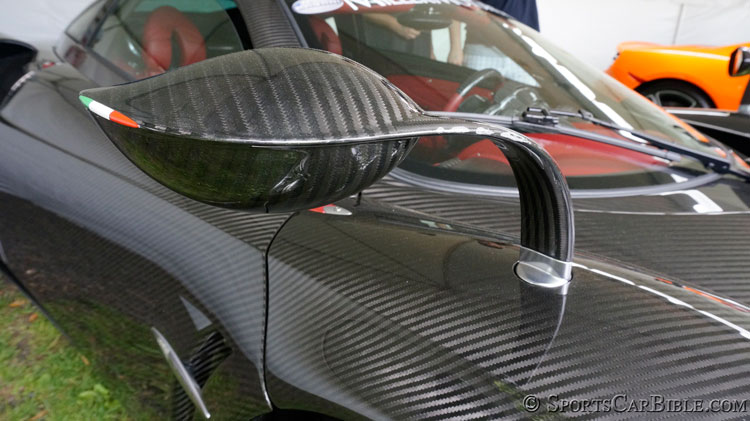 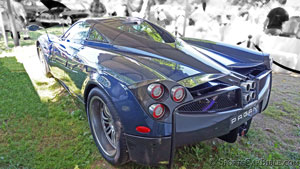 The in-house design is along the same lines as the Zonda, very "childish" and thus Hypercar like, but unlike the Zonda, the Huayra has more mature lines that seem more cohesive and more complete if not more polished than the Zonda’s design. The front meshed grill is enormous and divided into sections by several trim pieces.

Two fashionable LED strips are fitted onto the grill’s trim, and two small protuberant oval headlight pods on each side individually house two round Bi-Xenon optics giving the Huayra an air of wolf spider with its eight eyes and wide mouth. In between the headlight clusters is a pointy F1 front nose like on the Zonda, then two massive air-vents are fitted on each side of the nose here to exhaust hot air from the front radiators. 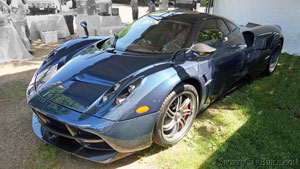 This creates at the same time downforce on the front axle. To add even more front-end downforce, Pagani went outside the box by conceiving two swiveling flaps that partially cover the hood air-vents, and can be raised up independently by the inboard computer to increase frontal downforce and high-speed stability but also works as an air break if nescessary. The long and arched carbon-fiber side mirror stems look very elegant, but not as much as the “tulip” mirror casting or “woman eye” shape as Horacio Pagani would say.

Following the front wheel arch line is a side vent here to help diffuse hot air generated by the carbon ceramic brakes and also helps reduce the front drag. The doorsills have a large air-channel feeding the mid-rear engine, while another air intake “a la F 430” can be seen on top of the rear fender. The cockpit is, as on the Zonda, exposed like a “bubble roof” which lets you have a great visibility with its thin pillars and three quarter side windows.

The big news for the Huayra comes from its “Gull-wing” door signature, seen first on the famed 1954 Mercedes 300 SL. When raised up, the majestic doors give the Huayra a superhero look, and are fitted with a roof glass piece to let more light into the cabin. Following the glass roof theme, the rear window and engine glass cover extended Horacio Pagani’s vision of a long, pure and transparent car open to the sky. 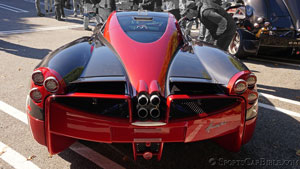 To reach the stars, the rocket like titanium quad-exhaust layout in a square formation looks somehow more grown up on the Huayra with the rear top panel fusing into it. On each side, two more aerodynamic flaps can again be raised up for more rear downforce, better high-speed stability and can also be used as an air-break without ruining the rear lines often done by huge rear wings. On each side of the exhausts are a one piece carbon fiber rear panel including the rear meshed vents and rear diffuser. 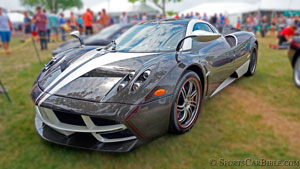 The tail light clusters are formed by three round lamps placed on a triangular pattern and are framed in a carbon fiber piece that mimics the “woman’s eye” side mirror shape. To complete the Huayra’s design, a set of 7 dual-spoke “fan blades” wheels looked right at home on the Huayra and are equipped with specially made Pirelli P Zero tires giving maximum grip, but also less friction for a better and more politically correct 21st century Hypercar… can I have a diet coke with my fried butter value meal please!? 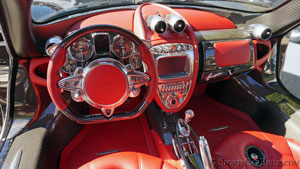 The interior kept the “Twenty Thousand Leagues Under the Sea” feel from the Zonda, but added layers of dimension to the Huayra. The dials are sunken into big metal castings and are an array of creative madness with above them a floating carbon fiber sun visor, while at their center a multicolored display screen competes with your Christmas tree. The steering wheel is also very detailed and is a fusion of carbon fiber,

metal and leather with buttons and switches on its branches, while the F1 transmission paddles are just behind the steering as usual. Like in the Zonda, the tube like interior air-vents are probably the least appealing piece of interior design, yes interior design is what comes to mind with the Huayra. The amount of detailing for any metal casting, leather stitching and carbon fiber panel, which is weaved in perfect junction with each other forming a motif on their own is incredible. 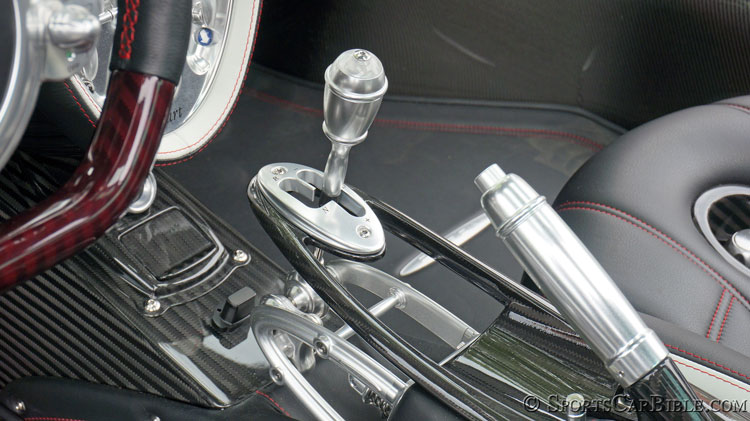 The interior treatment is taken to another level on the Huayra, the center console is cast out of a single aluminum block, and a larger colorful screen is here to display the necessary information for your phone, stereo, and navigation system. Above and under the screen are all the knobs and buttons needed to work the AC/heat, lights and other secondary functions. The gear lever mechanism is exposed and displayed around metal tubing that interlaces with carbon fiber arms that form part of the parking brake lever frame… Just plain luscious, and maybe even just what Horacio Pagani intended for the Zonda without really being able to render that kind of interior back then. 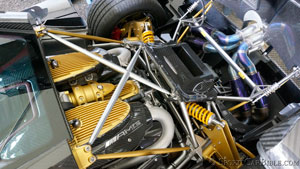 As with the Zonda, the Huayra is powered by a AMG V12 Mercedes (M158) but unlike the Zonda this new unit is bespoke for Pagani only. Smaller than the previous 7.3 liter (445 cu in) V12, the new dry-sump 6 liter (365 cu in) V12 is located longitudinally in a mid-rear position, but here it is helped by two turbos unlike the normally aspirated and bigger Zonda V12.

A twin-turbo engine was chosen for “oomph” factor and minimal turbo lag. The “smaller” V12 still manages to develop 730 hp and 700 ft lb of torque. This power is delivered to the rear wheels via a transversally placed sequential seven speed transmission to keep the weight within the wheelbase, but unlike the new dual-clutch system seen elsewhere, Pagani decided to adopt a single clutch to save a supposedly 154 lb (70 kg). 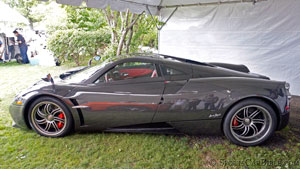 For a vehicle loaded with personal touches, opulence and equipment, the Huayra remains light at 2976 lb dry (1350 kg). With this weight advantage and the low friction P Zero tires developed especially for Pagani, the Huayra achieves the lowest CO2 emission recorded for a V12 Supercar and also a 0-60 mph time in 3.3 seconds. As for the top speed, Pagani claims it to be of 230 mph (370 km/h), and there is no doubt that a car with 730 hp and weighing so little wouldn’t reach it. 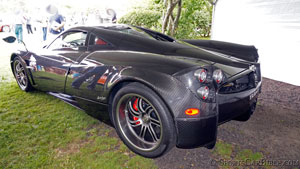 The Huayra’s power, details of its fit and finish impresses, but was expected from Pagani who needs to market himself out when surrounded by Lamborghini, Maserati and Ferrari. What really makes the Huayra special, is the fact that its design shouldn’t work, with its huge grill, too many headlight pods, and an awkward Japanese tuner tail light treatment. But it somehow works fantastically and grows rather quickly on you showing you that Horacio Pagani is now capable of fully expressing himself in a clearer and more organic way.