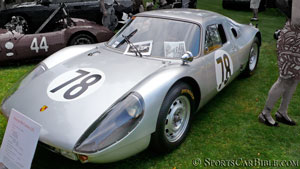 Porsche ended its Formula 1 racing program in 1962 and started to regroup its forces for the 1964 FIA GT class, which demanded 100 cars to be sold in one year to be eligible for the GT race. Ferdinand Alexander Porsche, grandson of Dr Ferdinand Porsche also called “Butzi”, was responsible for developing the car and was able to finish the 904 program in an amazing crunching six month time. The production Porsche 904 was born in 1964 and was referred to the public as the Porsche Carrera GTS and is now often called the 904 GTS. 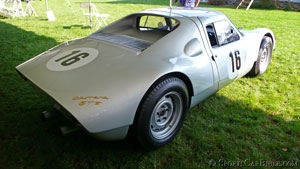 A brand new technique for Porsche was used with the adoption of fiberglass to form the 904's body, the advantage of this material was that it was easy to form, repair and foremost it was very light. Heinkel Aircraft company was chosen to execute the fiberglass work with two bodies done per day. The 904 body was then shipped to Porsche where they bonded it to a press steel 2 Box Beam chassis making it viable for production in terms of expenses and time deadline. 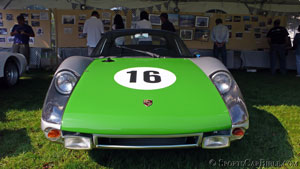 The 904 design was very low and pointy at best with elongated headlights under a Plexiglass piece. It had no side rear windows but an air intake just behind the side windows while the long tail finished by an integral rear spoiler. Being a production street car the interior was appointed with a heater and switches for turning signals, lights, and a complete three dial dashboard had everything you could need to check on the status of your engine and speed. 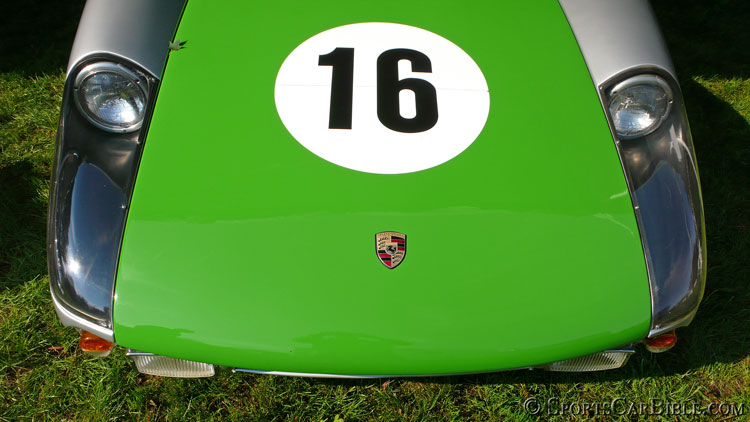 The 904's chassis received its engine in a mid-rear layout position unlike the Porsche 356 and while being developed it was supposed to receive the flat-6 cylinder from the almost born, but not yet ready 901/911. Finally the 904 ended up with the 356 Carrera 2 four-cam, twin-plug per cylinder, 2 liter (120 cu in) flat-4 tweaked to produce a staggering Weber fed 180 bhp at a high 7200 rpm. This highly tuned race engine also found in a less potent form in the 356 Abarth Carrera GTL was mated to the first 5 speed manual gearbox found on a production Porsche. It gave a top speed of 162 mph / 260 Km/h and reached 60 mph from a standstill in 5.8 seconds all due to its 1443 lb / 655 kg weight. 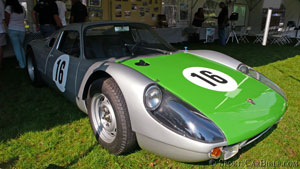 All around disc brakes were used on the Porsche 904 and while the suspension settings with its engine location was advanced at best it still was tricky when cornering at the limits. This didn’t stop the 904 Carrera GTS from winning the Targa Florio, Le Mans and many other races all over the world though. While most of the 904s had the four-cam, flat-4 engine, a very few of them had the 2 liter flat-8 used in their abandoned F1 program, and finally the 901/911 flat-6 was also used on the Carrera GTS to test its endurance. These 904s are referred to as 904/8 or 904/6. 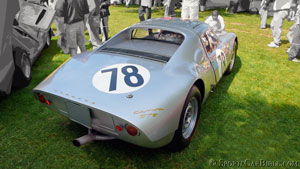 The Porsche 904 was the first fiberglass car in a long line of great and successful racing Porsches, but it also was the first and last Porsche available as a racer/street production sports car for a little more money than a 911 at the time which enthusiasts recognized and forced Porsche to build an extra 20 Carrera GTS in 1965 to satisfy the demand. Today the Porsche 904 Carrera GTS is prized and coveted by collectors all over the world making their value much more stable than their rear axle balance.