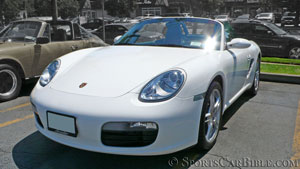 After the immense success received by the first Boxster generation (986) a new model was ready to be introduced for 2005. Its code name was 987 and at the first approach it looked more masculine and aggressive with a hint of Carrera GT courtesy of a set of new headlights…hallelujah! 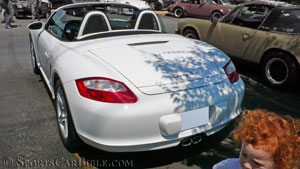 The front bumper’s air intakes looked sportier, the side mirrors were aerodynamically shaped, and the rear retractable spoiler was still between the now sharper looking tail lights. The only let down could be the side air intakes on the rear fenders with their light silver finish. 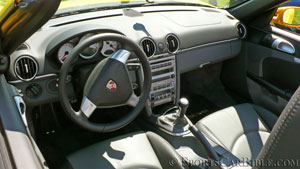 The Boxster's interior also got a major redesign with bigger and lower seats, while the dials got bigger with more room to breathe under the now symmetrical visor increasing readability. In all, the interior quality was improved now reflecting the Porsche Boxster’s price tag and aligning itself with the 911 (997). 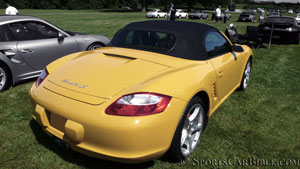 Right away two versions were available with the base model and the prized “S”, both running with the flat-6 cylinder boxer engine. For the base model, the engine’s capacity was 2.7 liter (164 cu in) developing now 240 ps / 237 hp at 6500 rpm instead of the 225 for the exiting Boxster (986), but it was still mated to a 5-speed manual gearbox or a 5-speed Tiptronic unit (still best to avoid). Performance was on the rise with 6.1 seconds to reach 60 mph from a standstill, while the top speed was now 257 km/h / 160 mph. 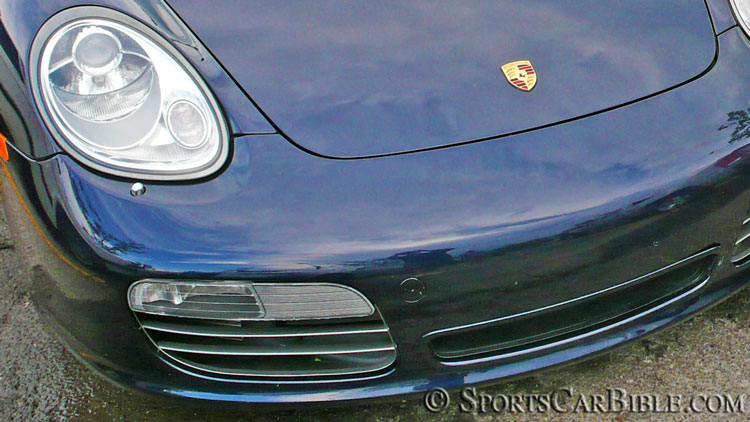 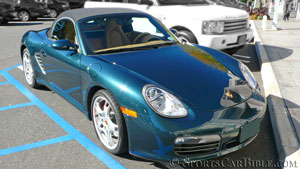 Outside the differences between both models followed what the previous Boxster had already set, with a triple air intake on the front bumper and dual central exhaust instead of the single one found on the base Boxster. For the Boxster S, 18” wheels with stronger red brake calipers were available as standard but a series of 19” wheel sets were offered as an option and worked particularly well with the new Porsche Active Suspension Management (PASM). 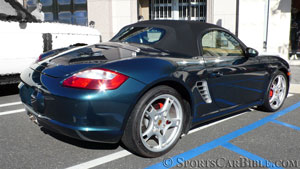 The PASM stiffens and lowers the car on Sport mode and with the Porsche Stability Management system (PSM) the traction always has a chaperon. A few more new “gadgets” were an option on the 987, first with the very expensive ceramic brakes with yellow brake calipers for $8000 (PCCB), not really needed when the steel disc already worked wonders and a Sport Chrono Package Plus (SCPP). The SCPP package added a chrono-watch right smack in the middle of the dashboard a little bit like an eyesore or pimple, which could be used to time your laps at the track and access more aggressive suspension settings on the PASM and sharpen the throttle response. 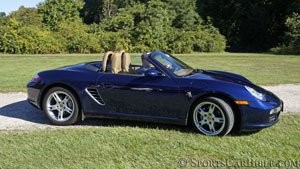 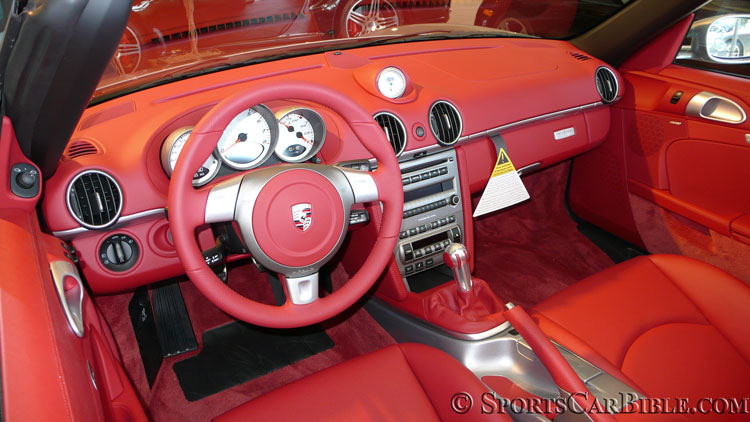 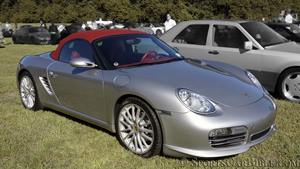 A limited edition arrived in November 2007, called the RS60 (550 Spyder’s last evolution), this loaded Boxster S had silver paint and red leather interior with red tail lights, front spoiler lips and no visor above the dials. It developed 303 hp and was produced at 1960 units (date of creation for the RS60). 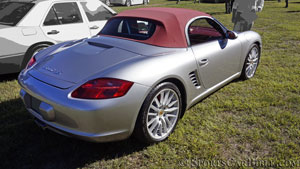 It was joined in October 2008 by the Design Edition 2 producing the same horsepower as the RS60, but only available at 500 white units worldwide. The last Limited Edition is simply called Limited Edition and was produced at 250 units. The Limited Edition is finished in bright RS Special Orange with black accents including the wheel set. 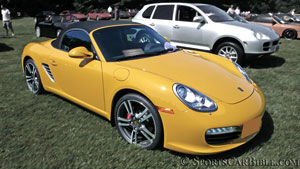 These limited edition models closed the gap between the first 987 generation (987.1) and for 2009 a redesigned 987 (987.2) was unveiled with reworked headlights, tail lights and a rear diffuser. 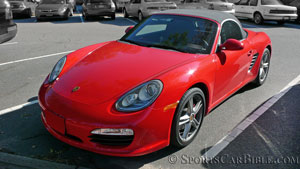 The base Boxster received a 2.9 liter engine producing 252 hp (255 ps) at 6400 rpm now closing the gap between the old Boxster S and this new standard model. The Boxster S kept the same capacity of 3.4 liter (207 cu in) but this time with direct injection (DFI) it made 310 ps / 306 hp at 6400 rpm all this available with a limited-slip differential for proper tail sliding. The other news was the introduction of the 7-speed dual-clutch PDK transmission making this type of sequential transmission a viable option over the old Tiptronic. 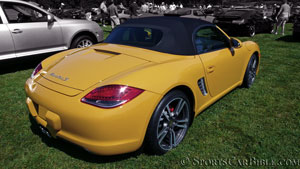 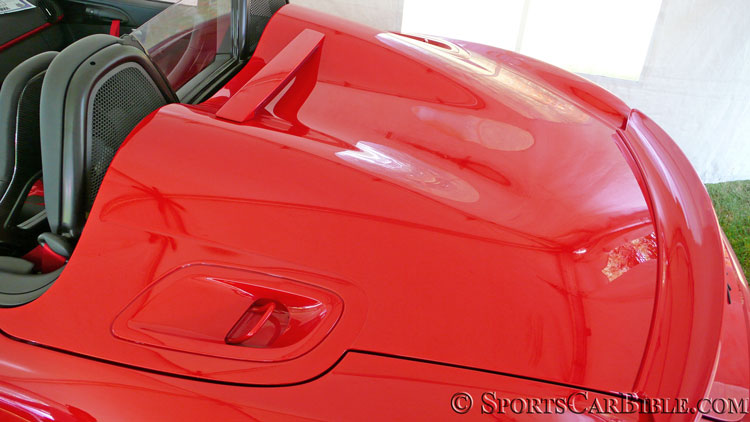 In November 2009 Porsche announced the most enthusiastic and focused Boxster so far with the Boxster Spyder, which is reminiscent of the 550 Spyder. To begin, the Porsche Boxster Spyder went on a diet and lost 176 lb / 80 kg. This was possible by adopting aluminium doors with strap door handles, an aluminium rear deck, a basic manual 2 piece soft-top called the "Sun Shield", ultra light 19 inch alloy wheels “a la 997.2 GT3”, and fantastic carbon fiber seats. Also simple equipment such as the AC, radio with PCM (infotainment) up to the cup holders and even the practical and rather good looking sun visor above the dial binnacle have been omitted. But any options can be added back into the Boxster Spyder and today most of them have at least radio and AC. Visually aside from the beautiful lightweight 19 inch wheels that reduce unsprung weight and the lower stance of 20 mm or 4/5 inch given by a sport suspension, 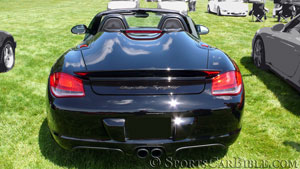 the Boxster Spyder top and rear deck are quite different. The lightweight manual soft-top has a more rakish design and looks rather artistic if not intricate with its 2 back straps. Sadly the Sun Shield takes quite some time to set up and is more of a curious ballet routine that should be the funny talking point of your regional car show than something to marvel at. The headlights received a surrounding black trim treatment, and black side air-intakes with no slats. Also the aluminium rear deck with a fixed rear spoiler is all new and mimics headrest fairings as older racers like the 718 RSK or RS 60. The Boxster Spyder is finished with a lettering “Porsche” doorsill racing stripe on all Spyders. 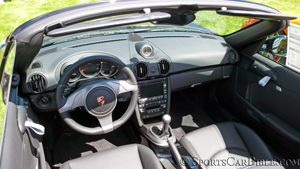 Inside the Boxster Spyder, as mentioned, the aluminium doors have a colored strap instead of the usual door handle, which match the colored seat belts, again the carbon sport seats are a great addition, but the binnacle sunless visor looks unfinished and rather cheap. The 3.4 L / 210 cu in flat-6 engine also has been tweaked for an added 10 hp as the Cayman S giving a total of 324 ps / 320 hp. 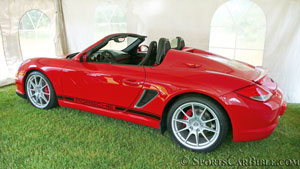 This lost weight and horsepower gain are responsible for a 4.8 sec time to get to 60 mph with the optional PDK and Sport Chrono Package when launch control is selected. With the standard 6-speed manual gearbox 5.1 sec is still a respectable time, which most enthusiasts have taken over the PDK. The top speed is 267 km/h / 166 mph with the top down, but due to the umbrella nature of the Sun Shield, the top speed with the top up is advised to be kept under 200 km/h / 124 mph.

The 987 or Boxster second generation is another success signed by Porsche and continues the charm and excellent recipe that the German brand seems to be the only one to master.