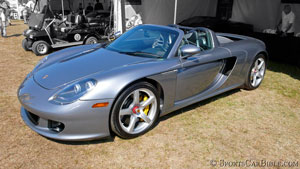 Without counting the very exclusive street version of the Porsche 911 GT1 produced at only 30 units to satisfy race entry homologation for the GT1 race season between 1996 to 1998, it had been 14 years that Porsche didn’t indulge us with a proper production Supercar. The Porsche Carrera GT (980) was first presented as a concept in late 2000 and received a green light for its production to start in 2003. 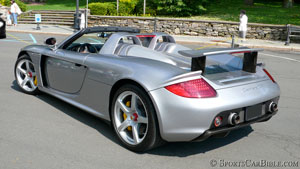 This new Supercar was a breathtaking all new “roadster”, and even better it finally was something other than an “Ultra 911” from its chassis to its engine. Most of the panels were made out of carbon fiber with a hint of Boxster emerging at the front, but with a more rakish appearance than the small Boxster with a more profiled nose, front spoiler and headlights, the Carrera GT also differs from its little brother. The side mirrors also were aerodynamically shaped and a large air intake on the side rear fenders helped cool the engine. 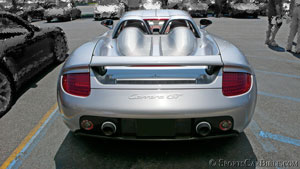 The top was composed of two removable carbon fiber panels “a la Targa” which could be lodged in the front hood, while the rear was flat with a superbly crafted engine cover including two semi-conical meshed grills allowing the heat from the engine bay to escape. For the rear treatment design, a rear wing raised itself at 75 mph keeping the rear planted to the asphalt. This accomplishment is also shared by the all carbon fiber undertray creating suction at high speed. To finish this piece of art, a set of five spoke magnesium wheels finished the Carrera GT’s design! 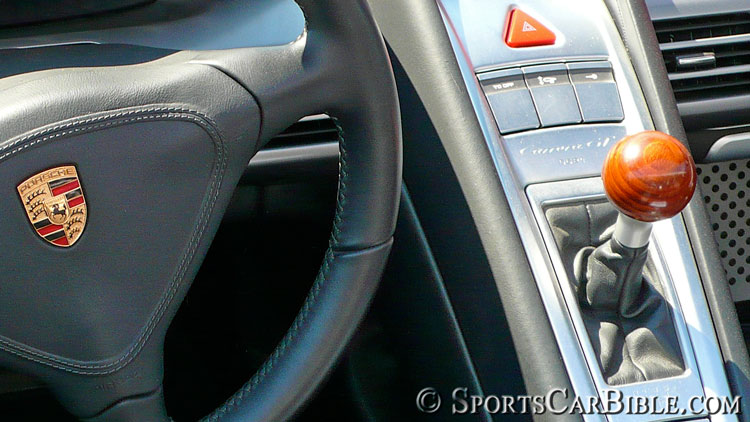 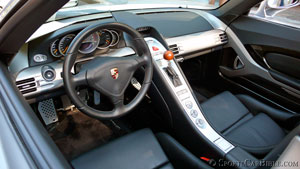 The interior was also mainly made out of carbon fiber with a long and swooping magnesium center console adorned by a birchwood gear knob as the Porsche prototype racers 917 had. The dashboard had five main dials interlaced to each other and the pedals were hinged from the floor. 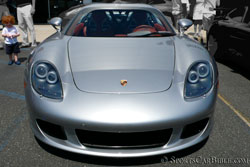 The engine was resting on a carbon fiber sub-frame to better deal with vibrations and no flat six was found behind the rear axle, but a water-cooled V10 mounted in a longitudinal mid-rear position for better balance. The V10 engine was rescued from a Le Mans Prototype program 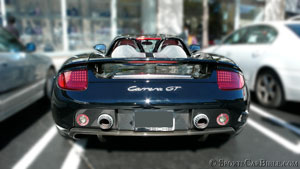 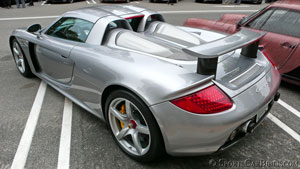 To control this power the Carrera GT didn’t have an array of electronic gizmos, but traction control with Anti-Spin control (ASC) were on board. Most of the high-tech prowess was achieved by using a carbon fiber safety cell tub, first seen on a Supercar. Also pushrod suspensions like in a F1 car, massive ceramic disc brakes made from silicon carbide (PCCB) and a very light ceramic clutch (PCCC) of only 6.5 in / 16.5 cm reduced the height of the crank to the floor to just less than 4 in / 9.85 cm. This made it possible to have the lowest center of gravity. With a very low inertia, made by a forged crankshaft and camshaft built with light alloy, the V10 screamed like a F1 car and was very reactive to throttle response. Its responses were very reactive when accelerating or when the gas throttle was released. This could also be experienced when turning the ignition off as the engine stopped suddenly as if you flipped an electric switch. 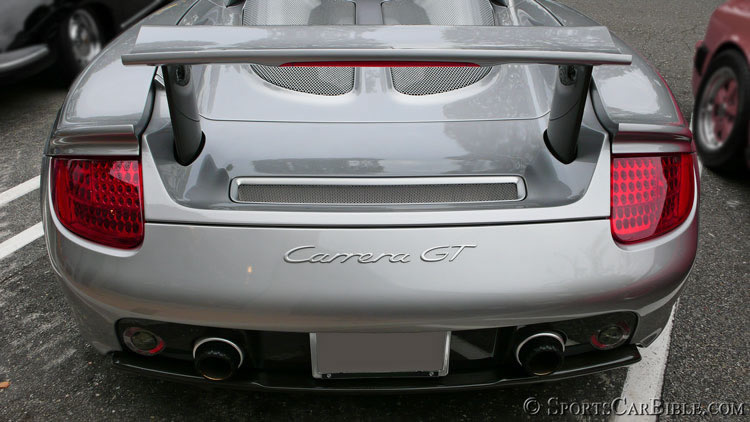 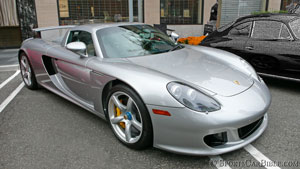 Production of the Carrera GT ended in May 2006 after 1270 Carrera GTs were built. What is the most surprising is that this Porsche Carrera GT sounds like a Formula 1 Fe…..ri and was the opposite of what the 959 was to the F40 back in the late 80’s. This time around the competing Ferrari Enzo was the high-tech Supercar, while the Carrera GT was, with its fair share of technology, the purer and more straightforward Supercar with its manual transmission and lack of different mode settings.