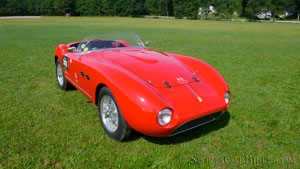 In order to stay in the car industry and continue fulfilling his passion for auto racing, he produced his own first two race cars under the name “Auto Avio Costruzioni” with the model “815” in 1940. Being free of his legal obligation towards Alfa Romeo in 1942, Enzo produced very competitive racers with the 125 S, 159 S and 166 S built between 1947 and 1948 after regaining control of his “Scuderia Ferrari” name brand. But it is with the Ferrari 166 MM Barchetta racecar, which already won many races by 1948 including the Mille Miglia, the Targa Florio, and the Coppa Inter Europa, that made Enzo Ferrari succumb to the pressure of producing street cars for rich customers already using his race cars on the street. 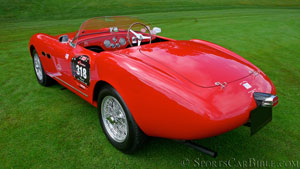 Thus the Ferrari 166 Inter was then introduced in 1949 and produced until 1950. The first road going Ferrari was quite basic and very close to the Ferrari 166 competition cars. It used oval tubing to form a ladder frame chassis, the suspensions were composed of wishbones at the front with transversal leaves, and lever arm dampers at the back also linked to semi-elliptic leaves springs. The first Ferraris were clothed by “Touring” like many other manufacturers who sent their rolling chassis to different coachwork houses to get bodied by hand. Touring mainly clothed the 166 racers as little open two seater Barchettas (little boat), with its “Superlerggera” technique consisting of laying aluminum panels over a light tubular frame. This gave Touring’s cars a weight advantage during races making him the number one coachbuilder at the time, as well as Enzo’s favorite. 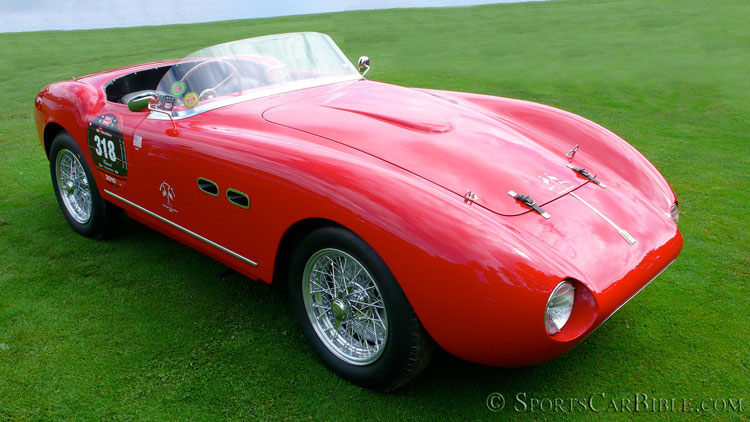 The 166 Inter nomenclature represented the Coppa Intereuropa race at Monza in Italy. The “166” referred to its one cylinder capacity in cubic centimeters. Therefore 166 cc times 12 cylinders made for a little 2 liter V12 engine (122 cu in). This V12 had been specially made for Ferrari by engineer Gioacchino Colombo, an ex-Alfa Romeo employee, also working with Enzo during his Alfa years. Colombo’s street engine design was a slightly detuned version of the race engine, but it remained at the front while giving power to the rear axle. 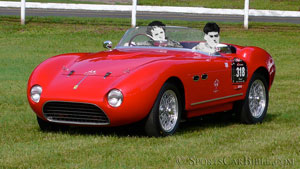 This V12, 60 degree masterpiece had a single cam producing anything from 95 hp up to 115 hp at 6000 rpm with a single Weber carburetor. With this power, the 166 Inter could reach a top speed of 112 mph (180 km/h), and a 0-60 mph time in 11 seconds. The gearbox was more evolved than the chassis with a fifth gear ratio available instead of the usual four speed unit found elsewhere. Although Vignale, Bertone, Ghia and even Stabilmenti Farina, who then employed his younger brother Pinin’ Farina also bodied a few 166 Inter chassis, Touring was the most prolific designer and coachbuilder at the time.

All Ferrari 166 Inters were hand built. All were somehow different, but all received a split windshield and parts-bins were shared with the Simca 8 and Fiat 1100. The Body was inspired by the Cisitalia 202, also drawn by Pinin Farina, and was elegant without fuss. The door handles were flushed with the door panel, and a hint of 250 GT SWB could already be seen with the fastback and rear fender design of the Stabilmenti Farina cars. The 15 inch steel wheels were standard, but Borrani’s wire wheels were also available, and were fitted with drum disc brakes all-around. 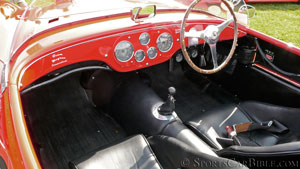 The interior matched the simple body lines, with large dual tone Jaeger Dials, a three branch Nardi wooden steering wheel, and push pull levers. Like all 166 body designs, not all dashboards were laid out identically, but they all received a metal color coded matching dashboard.

The Ferrari 166 Inter production ended after 38 cars were made including four convertibles. Although it is known that Enzo Ferrari wasn’t as involved with his production sport cars as his racing cars, it gave Enzo the opportunity to run side by side with the big boys and fulfilled his ego. Ferrari quickly won notoriety in a devastated after-war Europe with its V12 engines, great bodylines and race victories, which were piling up rapidly, like the prestigious Le Mans victory in 1949 with the 166 MM Barchetta’s series.

This perfect recipe gave Ferrari its reputation within the very first years of its creation, but more importantly the 166 Inter gave the non-racing enthusiasts the opportunity to lust after, and acquire the best sports car breed in the world. This was achieved from the start by having a production car based straight on the herd of 166 racers which won the Mille Miglia, the Targa Florio, Spa, the Tour de France, the Rally des Alpes and last but not least Le Mans, just to name a few. Not a bad start for a racing team, turned sports car manufacturer!