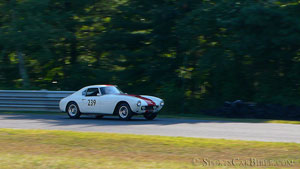 This is the story of what may be the most beautiful postwar sports car ever created… the gorgeous and quintessentially Italian 1959 Ferrari 250 GT Berlinetta SWB or “Passo Corto”. After Ferrari’s first major successful racing sports car, the 250 GT Competition TDF, Enzo needed to replace the 250 TDF with its evolution, the Ferrari 250 GT Berlinetta SWB (Short Wheelbase). 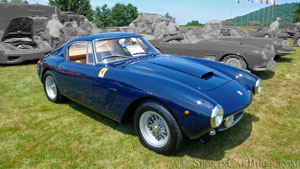 The 250 GT Berlinetta SWB original design actually emerged from the sixth and last of the 250 TDF series, also referred to as the 250 GT LWB Interim (Long Wheelbase). This last TDF had a Pinin Farina design and was handcrafted by Sergio Scaglietti on a 2600 mm (102.4 in) wheelbase chassis. The 250 GT SWB was also built by Master handcrafter Scaglietti on a Pinin Farina design, but it received the shorter and sportier 2400 mm (94.5 in) wheelbase tubular chassis. This gave the SWB a stiffer and nimbler chassis, which was easier to handle in twisty circuits, making the 250 SWB a great racer and a vice free sports car when cornering hard. 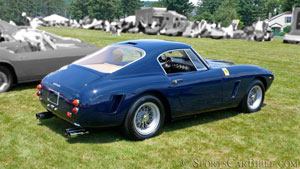 Three distinct SWB models were produced. The first SWB produced at 54 units was the 1959-62 “Competition” SWB which had a more aggressively tuned engine fitted with an all alloy body for better performance. 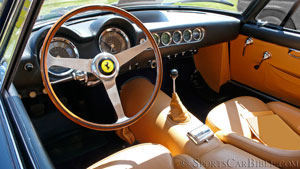 The second SWB produced at 90 units was the 1961-62 street version called “Lusso” for “Luxury” and was made in steel (not to be confused with the 1962 Ferrari 250 GTL Berlinetta Lusso).

And at last, the third SWB produced at 21 units cames in 1961 and was an even more potent competition version called the SEFAC Hot Rod, or Comp/61. 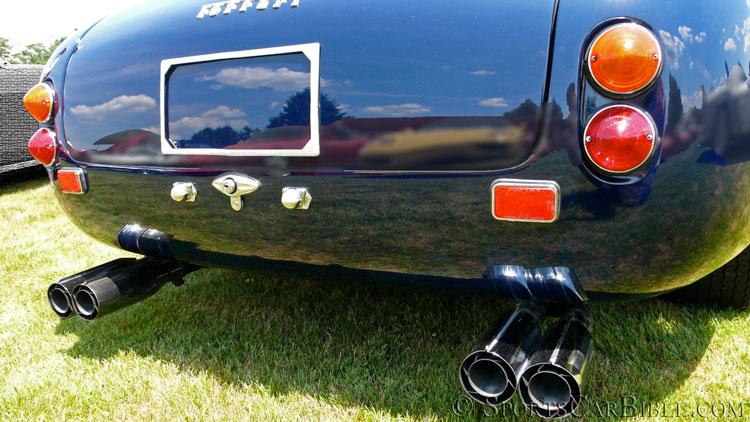 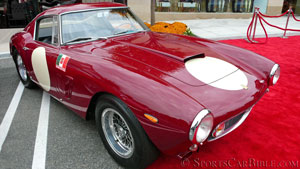 Pinin Farina’s masterpiece design for the 250 SWB had round exposed headlights with two delicate and thin split front bumpers. The beautifully curvaceous front fenders were separated by a recessed air-scoop on the hood. 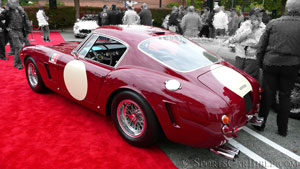 The front and rear side fenders also had a slanted air vent (not seen on early cars) to dissipate hot air from the all around disc brakes. The first 250 SWBs produced had no side window vents but this would change quickly making the 250 SWB profile even more pleasant to the onlooker. And unlike the last seven of the 250 TDF (6th Series or Interims) resembling what would become the SWB, the 250 SWB didn’t have the awkward three quarter rear side window found on these last TDFs. The rear still had the same fastback treatment with an air vent located at the top of the rear window to cool the occupants. The rounded rear fenders were bulged and enveloped the rear-end in a compact manner. At the back, two pair of vertically mounted round taillights with an enveloping one piece bumper and the traditional four exhaust pipes all accentuated by a set of Borrani wire wheels finished this Italian diva. 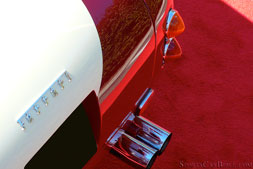 The interior had the usual three branch wooden Nardi steering wheel. The Veglia dials were mounted on a black crackled anti-reflective dashboard, for the Competition models, and deep bucket seats were also fitted for these models. The Street going versions had leather padding on top of its body color-coded metal dashboard with its 2 pods fitted on the 2 main dials. The center dashboard was adorned by 5 horizontal smaller dials like on the 250 Califonia Spyder, while a flip chrome ashtray on the transmission tunnel made it more casual. Later on a single sun-visor lip on the 2 main dials was fitted, while the oil dial in the array of the small 5 center dials came rejoin the 2 main dials. 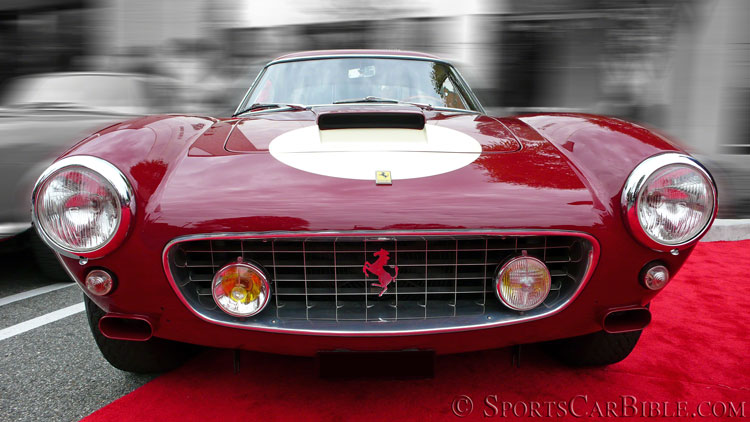 The engine block was the same for all SWB. It was the single-cam, 3 liter (180 cu in) V12 Colombo unit producing anywhere from 240 to 260 hp at 7000 rpm on the “Lusso SWB” depending on the specifications ordered. It was mated to a four speed all synchronized transmission and depending on the specifications, it hustled the Berlinetta to 60 mph in around 6.5 seconds. The top speed varied on the gear ratios, but 152 mph (245 km/h) is on the mark. Again the 250 nomenclature is in reference to the capacity of each single cylinder in cubic centimeters, thus 250 cc. 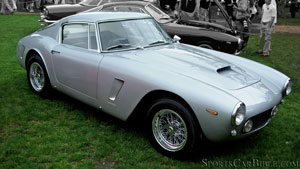 The 1959-62 Berlinetta SWB Competizion developed a more impressive 280 hp at 7000 rpm and can be recognized by its bumpers delete treatment. 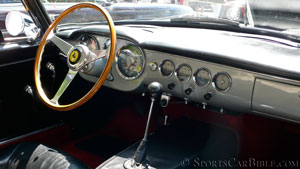 In 1960 the gas filler cap went from the top left side of the trunk to the rear left fender, but aside from these little evolutions the SWB was a well rounded sports car from the get go because it came from the well proven TDF program. So much so in fact that the 250 SWB won all types of racing events from Hill Climbing, to Mille Miglia, Tour de France, Le Mans… and ultimately the GT Championship in 1961. You name it and the Short Wheelbase could not only win the race but you could drive it to the event, pick up a trophy, and drive it back home again. This made the 250 GT SWB the best all rounder, dual-purpose sports car ever produced in that era. 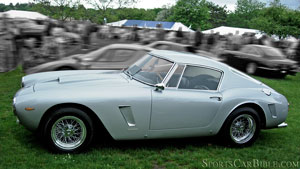 In 1961 a hotter version of the Competition car was introduced with the 250 SWB Competizion 61, or SEFAC Hot Rod. This even lighter Berlinetta weighed 2205 lbs (1000 kg) and benefited from the Testa Rossa six Weber carburetors setup, cams, and pistons to produce up to 295 hp at 7000 rpm, which would also be fitted on the 250 GTO the next year. This helped this ultimate SWB to rush to 60 mph in 5.5 seconds, while the top speed could reach up to 162 mph (260 km/h).

A little batch of spectacular one-offs were produced by PininFarina ("PininFarina" in one word from 1960) and Bertone with its 1960 Prototype EW, and 1962 compact “split-nostril” provided Tiffossis with another masterpiece to drool over. Production ended in 1962 after 167 Ferrari 250 GT Berlinetta SWBs were built, putting Ferrari’s name onto a pedestal, and leaving us with the purest and most harmonious Italian sports car lines of all time. 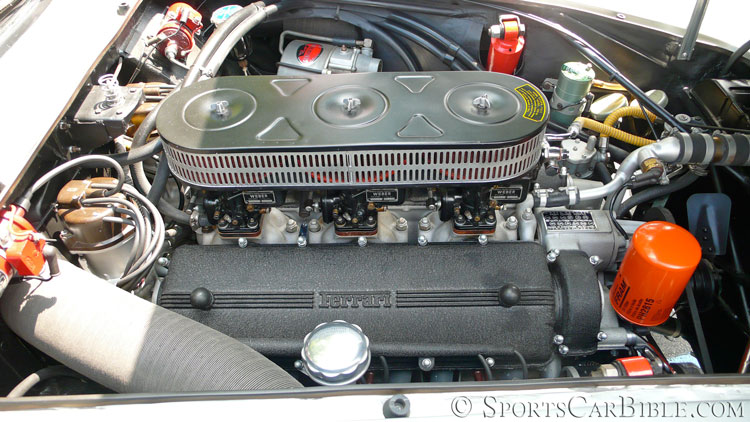