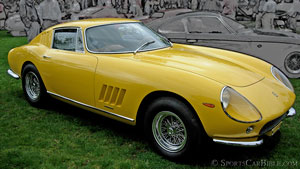 In 1964 Ferrari replaced its 250 Lusso touring sports car with what a lot of Ferrari fans consider to be the last real hand built diva, while some even consider it the most accomplished design done by PininFarina, the 1964 Ferrari 275 GTB. 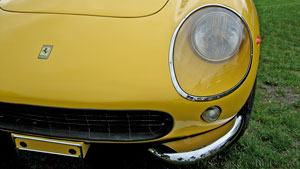 The 275 Berlinetta (Coupe) used a short tubular wheelbase chassis of 2400 mm (94.5 in) like every renowned Ferrari GT racer and was assembled except for the aluminum doors, trunk and hood lid, with steel panels, or the optional lightweight aluminum body. The end result was a handmade beauty created by Sergio Scaglietti located down the street from Ferrari.

The overall design queues were taken from the GTO for the back-end and the 250 California Spyder for the front-end with perfectly proportioned covered headlights ending at the edge of the 275’s nose. A full egg-crate grill fitted perfectly within the headlights, the nose and the two thin chromed front split bumpers’ layout. Like the 250 LM, the 275’s windshield was very rakish, but unlike the LM, the 275 GTB had more air vent gills on its front side fenders with a total of four slates to keep the engine bay cool, while a three slatted air vent was located on the rear buttress to keep the occupants “al fresco”. This abundance of gills gave the 275 a menacing shark like appearance without losing its elegance or without falling into a childish design. 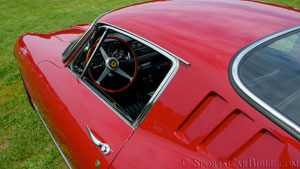 The rear had a fastback treatment like a SWB or a GTO with also the same generously bulged rear fender lines. A single round taillight on each side as seen on the “Lusso” surrounded by the enveloping and increasingly bigger rear spoiler on a Kamm-tail created needed rear down-force at high speed, while the usual four exhaust pipes poked-out from under a thin wrap around chrome bumper. The Campagnolo “Sunburst” alloy wheel set with center knock-off spinners were a new and welcomed modern addition, but the 72 spokes chrome Borrani wire wheels were still available as an option. 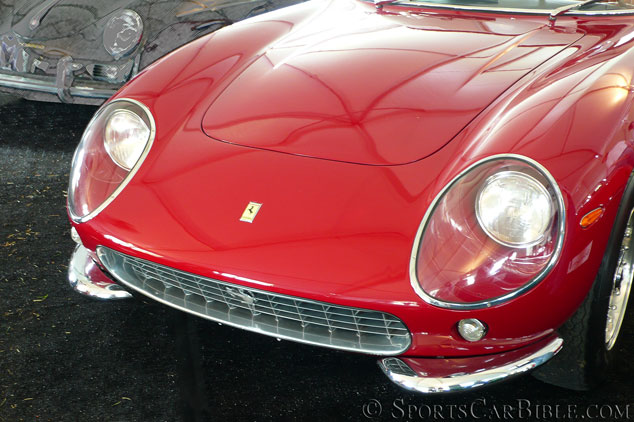 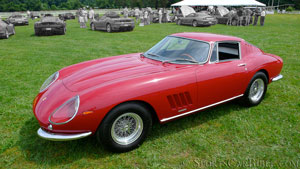 Disc brakes were fitted on all corners, but unlike the last drum brake generation, these early discs faded quite fast keeping many drivers on their toes. The real revolution though came with the adoption of an all independent suspension. This was a first for a road car Ferrari, with double wishbones, coil springs and tube-shocks giving a better ride on bumpy roads.

The V12, single-cam per bank engine was the Colombo unit now enlarged to 3.3 liter (200 cu in). This validated the 275 nomenclature of 275 cc per cylinder making this block a 3.3 liter capacity unit as mentioned. This V12 was available with a standard three or an optional six twin-choke Weber carburetors (275 GTB/6C) giving the 6 carburetor cars a little hood bulge necessary to clear the longer air box filter. The single cam per bank, 3.3 liter V12 developed 280 hp at 7600 rpm and close to 300 hp with the optional "6 carburetor" package. Unlike the 250 Lusso and like the GTO, the 275 GTB had for the first time on a road Ferrari a dog-leg (1st bottom left) transaxle five-speed gearbox. This rear transmission gave the 275 better weight distribution, while the extra ratio was needed for the 60’s fast and empty highways. 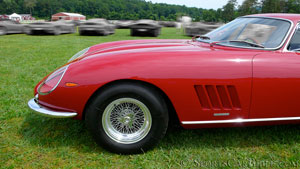 The sprint to 62 mph from a standstill was done in 6.5 seconds and the top speed of 150 mph (241 km/h) could be attained if you had a death wish. The 275 GTB’s main problem was to produce front air lift at high speed forcing Ferrari to redesign the nose as soon as 1965. This newly shaped nose is now referred to as the “Long Nose” as opposed to the “Short Nose” only produced the first year. The hood was extended down, distancing the headlights from the now smaller oval mouth grill fitted without the prancing horse logo. This made the front-end not as harmonious and almost catfish like compared to the original PininFarina 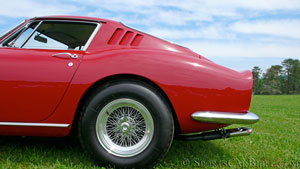 lines, but it helped plant the front axle on the ground at high speed, which is always a good thing.

The alloy wheels also changed, now wider, they increased the grip level, but without the “Sunburst” pattern the new units looked more bland. As well as the front, the rear had minor changes done with a bigger rear window, and two big outside chrome hinges now operated the trunk and complemented the large rear chromed “Ferrari” trunk logo. 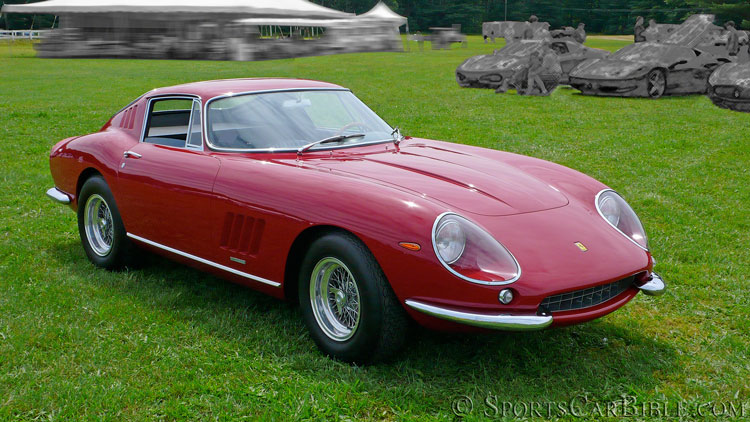 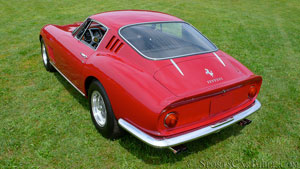 Inside some changes also occurred with the dashboard’s teak veneer being replaced by a sportier black vinyl treatment, but the wooden Nardi steering wheel remained. But the biggest change inside the 275 long nose was the adoption of an oval binnacle for the two main large Veglia rev-counter and speedometer, which were now tilted towards the driver in a cross-eyed fashion. As tradition demands it, the exposed chrome metal gate on the transmission tunnel looked fantastic and the deep bucket seats were very supportive. 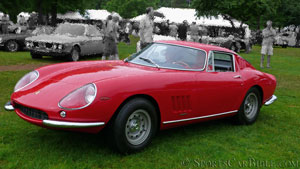 In 1966 the 275’s second revolution came with the first double-cam per bank Ferrari V12. This four-cam setup gave our 275 Berlinetta the new nomenclature of 275 GTB/4 if you please. Now all 275 models were fitted with six twin-choke Weber carburetors. This four-cam engine had the GTO’s firepower of 300 hp at a high 8000 rpm, and received a bulged hood making room for the new pair of cams and air filter box. A dry sump oil system kept the center of gravity low and finally a torque tube was used to cancel vibration occurring previously from the driveshaft not properly aligned on the chassis. The revised “interim” driveshaft was a welcomed improvement as well as the limited rear slip differential. With those extra cams the 275 GTB/4 could reach 62 mph in 6.2 seconds, while the top speed was 165 mph (265 km/h). 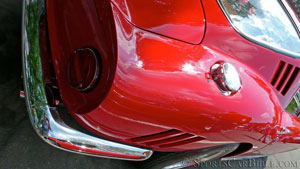 Two special and rare 275 GTBs emerged from the original production cars, the first with the 275 GTB/C (C for Competition) produced at 22 units over the course of the 275 production life, 10 units were done on the Short nose and 12 on the Long Nose, these rare 275 GTB/C cars were coach-built with thinner aluminum panels than the one found on the 16 street lightweight Alloy 275 GTB/4 cars. Almost all of the 275 GTB/C models were equipped with the optional Monza quick filler gas cap fitted on the right rear buttress or rear fender depending on the nose configuration. Also seen on the Competition models was sometimes a rear side fender air vent with three slats that matched the front air slat vents found on the front fenders. The 275GTB/C was so light, balanced and powerful with the four-cam version, that it was dubbed “The Poor’s Man GTO”, which is quite a compliment. 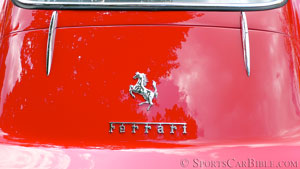 The second batch of 10 special 275 GTS/4 NART Spiders (North American Racing Team) were ordered from 1967 to 1968 by the American importer Luigi Chinetti, who managed to convince Enzo Ferrari to produce 10 Spiders (Convertibles) for the North American market. Not to be confused with the “normal” 275 GTS convertible, which had a completely different body style, all 275 GTS/4 NART Spiders were a chopped version of the Coupe adorning a soft-top, a flat rear trunk-lid, and are very sought-after today.

Production of the 275 GTB/4 ended in 1968 after 795 Berlinettas of all specifications were made. This ended a beautiful and glorious era of raw technicality and powerful elegance on wheels, which also helped Ferrari's image. 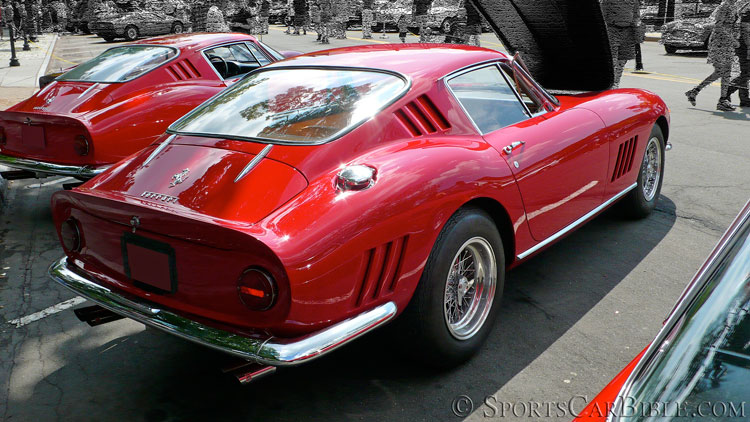