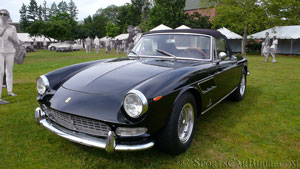 The 1964 Ferrari 275 GTS was a little two seater convertible offered at the same time as the 275 GTB coupe (visit file). Although they share the same name, the 275 GTS (S for Spider/Convertible) differs greatly in 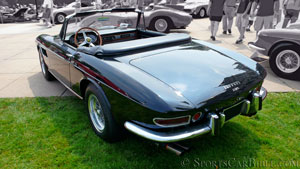 body style to its drop dead gorgeous 275 GTB coupe sibling. Still a hot little boulevard cruiser in its own right, the 275 GTS only shared the same 2400 mm (94.5 in) wheelbase chassis and "engine" with the GTB Coupe. 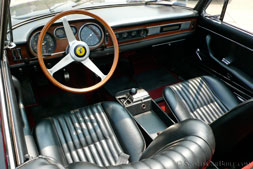 The 275 GTS was still designed and built by PininFarina instead of Scaglietti with steel panels except for the aluminum doors, hood and trunk lids. The 275 GTS had a less dramatic allure with its exposed upright headlights and front nose ending at the edge of the 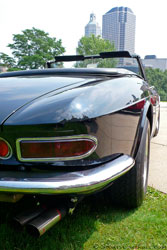 headlight recesses. Underneath them, a large eyebrow shaped turning signal was placed between a wide egg-crate grill. The side front fenders had 11 louvers venting the engine bay as seen on the first 500 Superfast, but it got replaced almost immediately by a three slat configuration also seen on the later production 500 Superfast. The rear fenders had a very slightly raised shoulder line over the recessed trunk lid, and the horizontal taillights under the trunk line were placed above the traditional quad-pipes. But on the chrome bumpers the overriders looked just a bit bulky. The windshield had a side window vent and the Borrani wire wheels were standard unlike the alloy set found on the Berlinetta. 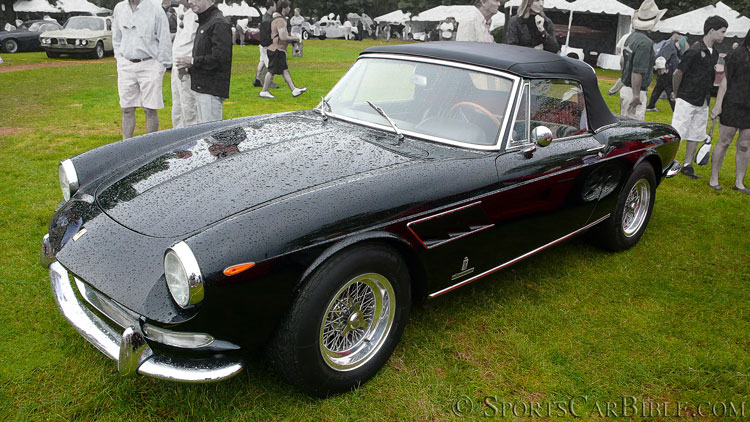 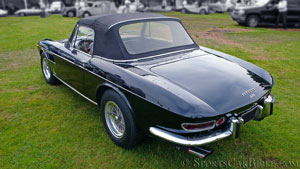 Inside, the leather seats weren’t bucketed, but well padded for comfort. The teak veneer dashboard was a mix of the 275 GTB “Long Nose” with its binnacle and big Veglia rev-counter and speedometer tilted towards 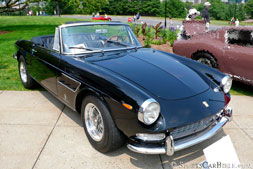 the driver in a cross-eyed fashion. Four gauges on the center dash included internal fluids pressure and temperature status gauges as well as the clock. A passenger folding footwell was there for the long journeys and the five speed exposed chromed metal gate gear lever commanded the rear transaxle transmission for better weight distribution… too bad it had the same unreliable driveshaft alignment problem with no torque tube as the Berlinetta, with no limited split differential. The metal gate was none the less matched by a chromed ashtray with Ferrari’s and PininFarina’s emblems on it, making you forget for a moment that these first generation disc brakes were only good for about 5 min. 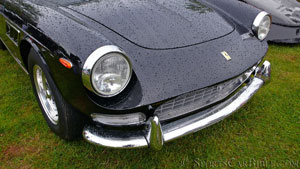 Following the all around disc brakes was the independent suspension fitted on all corners, which made this compact Ferrari livable most of the time with its upright driving position. The 3.3 liter (200 cu in) V12 Colombo engine was as mentioned the same as the single-cam per bank 275 GTB, but it was detuned for reliability and only was available with the three twin-choke Weber carburetor package. After being detuned, the 275 GTS produced 260 hp at 7000 rpm instead of 280 at 7600 rpm. This made for a lower torque curve, which was reached 500 rpm lower than on the Berlinetta, giving our 275 GTS better city legs. Everything on the 275 GTS was made for a civilized open air touring experience, but the GTS still could outrun everything on the street with a top speed of 143 mph (230 km/h) and a 0-62 mph time of 6.5 seconds. 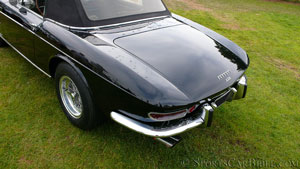 The Ferrari 275 GTS only had a two year production run, and never was offered with the four-cam engine. With 200 Spiders produced it finally came into its own in the classic car market after being slightly left aside at first. 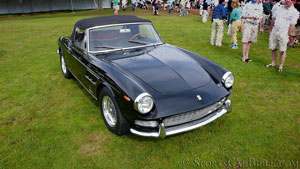 It is important to mention that in 1967 the Ferrari 275 GTS/4 NART Spiders was produced at 10 units only. These 275 GTS Nart Spiders were really the chopped version of the Berlinetta (Coupe) built specially for Ferrari’s 1st North American importer, Luigi Chinetti.

Today the 275 GTS is regarded as what it is, an elegant and discreet open vintage Ferrari with a tractable and reliable V12, just awaiting the next summer night cruise.

Ferrari 275 GTS -The brake air-vents on the side front
fenders started with a 11 small louvers configuration, but
these were quickly replaced by the 3 slats design seeing here.
Ferrari 275 GTS - Unlike the following Spider, the 330 GTS
and its "long Nose" front-end design , the 275 GTS's Nose
ended right at the end of the headlights overall design.
Ferrari 275 GTS - Enough intricate lines, like the recessed
trunk lid and "lifted" arched rear wings, made the 275 GTS
full of personality but its lines were also clean enough that
it allows the little Spider to be low key at the same time .
Ferrari 275 GTS - Large Veglia dials, Nardi
wooden steering wheel and chrome ashtray
with Ferrari's and PininFarina's flags.
Ferrari 275 GTS - The "Short Nose" style front-end
design was also shared with Ferrari's second four seater
also produced in 1965 (Series II), the Ferrari 330 GT 2+2 S II.