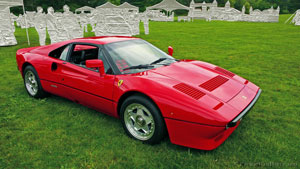 If the 1963 Ferrari 250 LM wasn’t Ferrari’s and the world’s first Supercar (maybe), than the 1984 Ferrari 288 GTO definitely was Ferrari’s first, and the start of a glorious and anticipated Supercar lineage from Maranello. 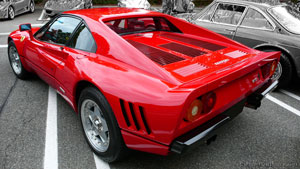 The 288 GTO’s purpose was to enter the now legendary “Group B” race class requiring that 200 cars had to be sold to be homologated, giving the name, “GTO” for ”Omologato” in Italian. Sadly after a series of fatal accidents, the overpowered Group B class was cancelled by the FISA (International Federation of Sports Automobile) for understandable safety reasons. 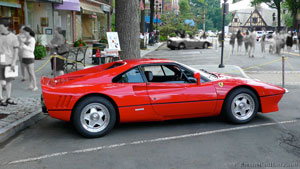 The Ferrari 288 GTO’s family roots were undeniably linked to the 308 GTB, with basically the same tubular chassis and some added strengthening, but to improve weight distribution the wheelbase was stretched to 11 cm (4.3 in) for a total of 2450 mm (96.4 in) allowing the engine to be longitudinally fitted instead of transversally as seen on the 308 GTB/GTS series. 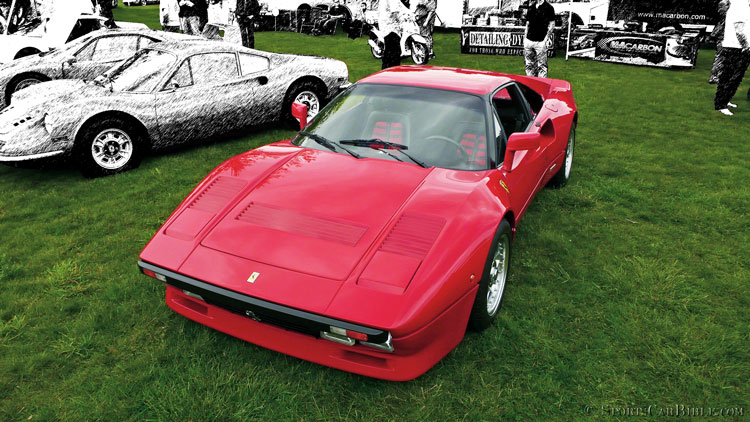 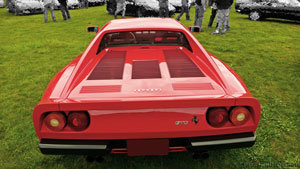 Pininfarina reworked the body by giving it steroids; most of the body panels were made out of fiberglass but also Kevlar/Nomex for added strength. The deep front spoiler had one set of two large rectangular high beam lights on each side of the radiator grill, with the same thin

black bumpers found on the Ferrari 308 GTB. On the bumper the turning signals/parking light strips were encased in it. The popup headlights were composed of a single round lamp, with a slatted air vent continuing just after them. Another wide rectangular slatted vent was fitted on the hood and could also be seen on the 1982, Ferrari 308 GTB QV. The body color coded side mirror stalks were impressively tall and looked the part as well as the specially made 16” five-spoke bolted Speedline split-rim wheel set with 255 mm rear 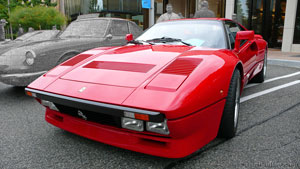 tires. Behind the rear wheels three slanted rear slats were there to cool the engine bay, but also mainly there to give a little nod to the 250 GTO. Also the bulged flared fenders with the Ferrari emblem at the front set the 288 GTO apart from the rest of the 308 series and gave it quite the menacing look. The magnificent shaped conical door air intakes ended at the back fender, initially seen on the Dino series it remained on the 288 GTO to cool the engine, but a second set of engine air intakes found its way between the now inwardly curved three quarter rear side 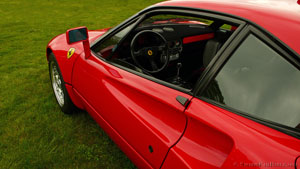 window and the flying buttresses, which wasn’t part of the engine lid anymore. The rear lid had three columns of louvered air-vents, and two smaller louvered air-intakes, needed to feed the two Behr intercoolers. Also at the back was a more pronounced rear spoiler lip on the engine lid than on the 308 series. The now traditional dual round tail lights at each side of the truncated tail and the usual quad-pipes under a split rear bumper finished this menacing design. 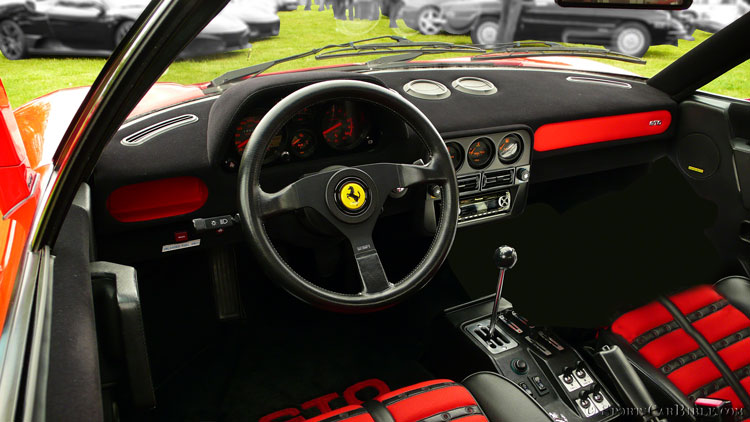 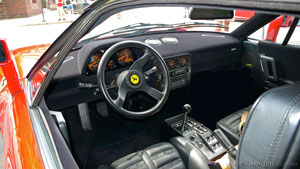 Inside, an Alcantara (faux suede) covered dashboard with a tall binnacle with orange numbering and a black leather “Momo” steering wheel acted as antireflective components. Three auxiliary gauges were placed at the center of the dashboard with two vents and the heat/AC control unit underneath it. The two level tunnel console housed a five-speed dog-leg (1st bottom left) exposed metal gear lever gate, lever switches for the rest of the heat controls as well as a cigarette lighter and ashtray 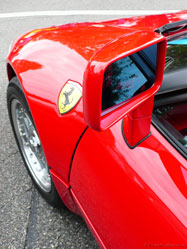 The engine was, as mentioned, mounted longitudinally and hung in the cockpit, separated by a removable Kevlar-Nomex cover. The dry sump, four-cams, 32 valve, 90˚ V8, had a 2.8 liter (174 cu in) capacity enhancing the 288 nomenclature (2.8 liter, 8 cylinders), and developed with two Japanese IHI turbos, 400 hp at 7000 rpm and 366 lb-ft of torque at 3800 rpm. The transmission could be seen hanging at the back and was equipped with a split differential on the rear axle. 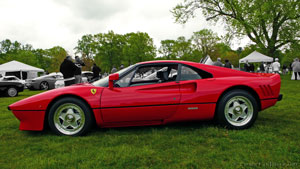 Intended to be produced at only 200 units, the 288 GTO was a success for Ferrari, and even if it wasn’t officially sold in USA, Ferrari still managed to sell a total of 272 GTOs by 1986. All 288 GTOs were painted red and built to be left hand drive only. The 288 GTO was the starting point of a new breed of ultimate Ferraris, and if you are into the exquisite 308/328 GTB lines, then the 288 GTO is the grand daddy of them all!