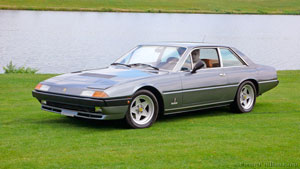 After the short lived “faux 2+2” Ferrari 365 GTC/4, which couldn’t accommodate rear passengers due to its extra small back seats, Ferrari launched the true replacement of the 365 GT 2+2 with the subtle, 1972 Ferrari 365 GT4 2+2. Finally a real four seater was again available in Ferrari’s catalogue, and once more PininFarina drew its body. 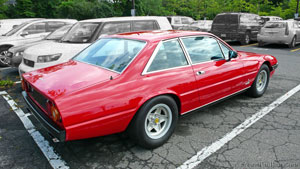 The chassis’ wheelbase was 5 cm (2in) longer than the 365 GT 2+2, making it now a total of 2700 mm (106.3 in), but the overall car length was shorter. Ventilated disc brakes were fitted all around as well as the all independent suspension with the self leveling rear suspension developed by Koni. This system re-leveled itself depending on the car’s load and had been already used first on the 365 GT 2+2. 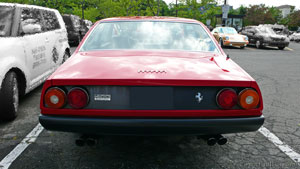 PininFarina went outside of its comfort zone with this angular 2+2 that didn’t have one curve to its name. The nose was chiseled with turning signals and parking lights sitting on the nose slope, while a wide grill just below the one piece black bumper seemed hidden. In front of the hood were retractable pop-up headlights with two round lamps on each side. A slatted wide brushed aluminum hood air vent gave a little contrast to the low hood allowed by the use of sidedraught carburetors. The 365 GT4 2+2 had thin pillars giving great visibility, and as seen on the Daytona, a thin recessed belt line gave some strengthening, as well as something to look at on this long profile. The five star alloy wheel set had a central knock-off cap, but Borrani wire wheels were available as an option. The 365 GT4 was a practical three-volume car with a decent size trunk but the awkward three round taillight cluster on each side sitting on a black matt paint finish didn’t help the rear end visual appeal. This three light cluster look was taken from the 365 GTC/4, and could have been the GT4 2+2’s visual downfall.

The modern interior was taken straight out of the 365 GTC/4 with its wide and long swooping down wooden center console adorning four gauges at the top and oriented towards the driver. The radio was installed just below the four top gauges with the AC controls on each side, which was a standard feature. A plethora of lever and rocker switches were scattered around the five-speed non-exposed metal gate gear lever, with the traditional metallic ashtray underneath it. The binnacle looked contemporary with four rounded central air vents on the 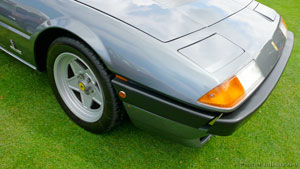 top center dashboard, but it is the rear space that made all the difference from the GTC/4 with leg and head room for two adults, as long as the front seats weren’t reclined all the way back. The rear passengers were wrapped in their own seats, and divided by a tall armrest with a rear ashtray located in front of it. To add to the comfort and luxurious feeling of this Grand Tourer, everything was covered with leather and thick carpet rendering long journeys that much more pleasant. 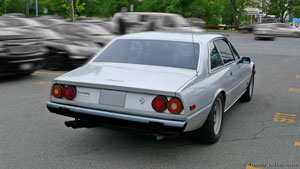 With this classy and timeless PininFarina design Ferrari introduced its evolution with the 1976 Ferrari 400 GT. The 400 GT was an all out 365 GT4 2+2 with the only external differences being a set of five spokes concave alloy wheels now held in place with five bolts. A low front spoiler lip kept the car more planted on the road, and favored the airflow into the radiator. Also a rectangular extra driving light was encased at each side of the grill. Happily the big visual plus came from the adoption of the unmistakable two round Ferrari taillights set on each side, but sadly they still were displayed with the same rear black matt finish. But underneath the skin was the major transformation on the 400 GT.

The Ferrari 400 GT was the first production Ferrari offered with an automatic transmission. Named the "400 A", it caused an outrage amongst Ferrari’s Tifosi. The transmission used was based on the three speed General Motors, Turbo-Hydramatic unit, giving what the North American customers mostly wanted. Of all the Ferrari 400s sold, two thirds were ordered with an automatic transmission, this "lazy" choice ended-up being a great success for Ferrari in terms of sales. The engine also received a boost, now with a 4.8 liter (294 cu in) capacity, the V12 gave the same 340 hp as in the 365 GT4, but at a lower 6500 rpm improving its tractability. 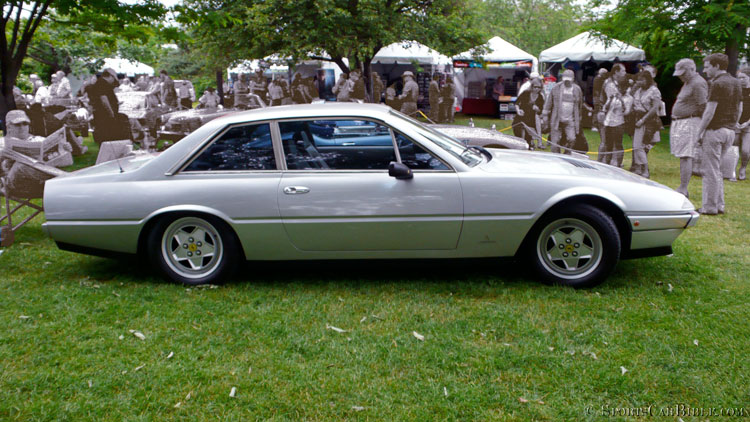 New changes came in 1979 with the adoption of injection giving the 400 its new nomenclature, the "400 i". At first this new system wasn’t well received because it reduced the top end power to 310 hp, then 315 hp in 1983, but it also considerably helped with reliability issues always challenged by six carburetors needing expert hands to be tuned. At the front, the brushed aluminum air hood vent was now body color matched, and at the rear, the questionable black matt finish was finally body color coded as well. Also new were the more profiled side door mirrors replacing the older and larger rectangular units. 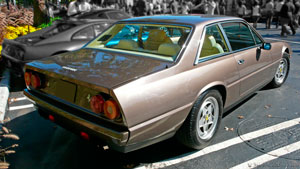 The interior also received a freshen-up with now heavily upholstered seats. Also, the four round interior air vents on top of the dashboard were deleted, now replaced by three squared vents relocated at the top of the center console with only three auxiliary gauges underneath it. Lever switches were replaced by big rocker plastic buttons; marking the arrival of the not so elegant and brash 80’s. Performance suffered a little bit with now a 7.8 seconds time to get to 60 mph, while the top speed remained the same at 150 mph (241 km/h).

The third evolution of this long lasting Ferrari came in 1985, with the Ferrari 412 GT. For this last update Ferrari changed the concave five-spoke wheel set with a flatter five spoke design, still held in place by five bolts. On both ends, the bumpers were more flushed to the bodywork, and received body color coded paint, bringing this 13 year old design to the present time.

Once more the engine was enlarged, this time to 4.9 liter (302 cu in) renewing with its initial power output of 340 hp, but at a lower 6000 rpm. In 1986 the power decreased a little to 325 hp with the adoption of a catalytic exhaust converter. It was still matted to the five speed manual transmission or the more popular three speed automatic GM unit. With less power and a slightly sleeker body, the top speed was a little higher at 158 mph (255 km/h), while 60 mph from a standstill could now be achieved in 6.8 seconds. 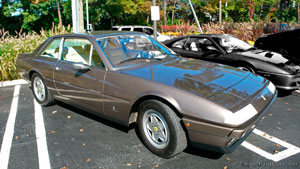 The production of this elegant, and discreet Ferrari four seater ended in 1989 after 17 years of loyal service. Nowadays the Ferrari 365 GT4, 400 i and 412 GT can be bought relatively cheap, not that maintaining the V12 would be, but what a classy and underrated presence this Ferrari has, and it keeps on looking more mature and subtle year after year… just plain classic!