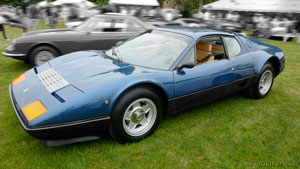 After Lamborghini unleashed its 1966 mid-rear engine Supercar bombshell, the Miura, Enzo Ferrari, who believed that the horse should remain ahead of the carriage, kept producing front engine V12 sports cars with the mythical and supposedly stopgap that was the 1968-73 Ferrari Daytona. Towards the end of the Daytona’s production life and under pressure to match Lamborghini’s racing and exotic engine configuration layout, Enzo finally succumbed to the pressure of producing a V12 mid-rear engine sports car for its customers. 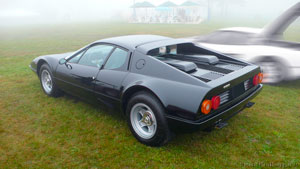 Ferrari had already offered a mid-engine sports car with its little V6 Dino series since 1968, but a V12 Supercar was now needed to rival the Lamborghini Miura on the market since 1966. Ferrari had been using a mid-engine racer in F1 prior to this, but Enzo felt that this engine layout would be tricky for the “man on the street”. Finally after a prototype was shown in 1971, Ferrari was ready to introduce their first 12 cylinder mid-rear engine Supercar with the 365 GT4 BB. 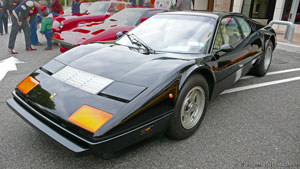 A new tubular 2500 mm (98.4 in) wheelbase chassis was assembled to receive the rear engine design, while ventilated disc brakes all around, all independent suspension with dual coil springs, and tube shocks at the back, set the pace. 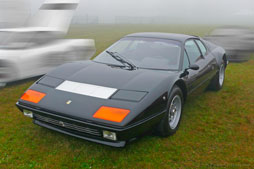 The design was by Pininfarina, then coachbuilder Sergio Scaglietti, located down the street from Ferrari, assembled almost all 365 BBs by hand. Pininfarina drew a low profile hood allowed by the engine now sitting at the back. Ferrari’s new Supercar had a thin nose adorned by a set of clear or orange rectangular turning signal/parking lights depending on the market. A pair of retractable pop-up headlights, with two round lights on each side, was located just above the turning signals. Between the pop-up headlights was a slatted brushed rectangular aluminum air vent sitting on the hood as seen on the 365 GT4 2+2 and 400. The 365 GT4 BB had a rear quarter window, and like the little Dino’s, 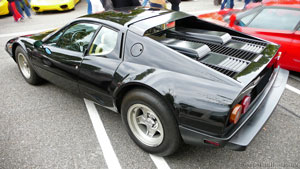 the rear window was vertical but not panoramic. Prolonging the roofline, were rear buttresses adorning a black spoiler on top of the rear window to create downforce. The rear engine lid had two massive longitudinal black plastic rectangular carburetor covers with a battery of intake louvers on them. Under the body’s belt line, the whole half bottom of the 365 BB was painted black and the rear had the infamous and "ugly" three round cluster taillights on each side, matched by the three exhaust pipes also seen on each side… not the best visual cue. To finish, the five-spoke Cromodora alloy wheel set had a central spinner hub nut. 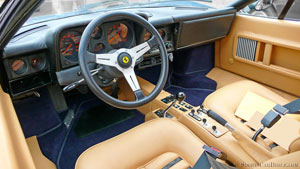 Inside only two bucket seats were found with a very simple rectangular binnacle under a three-branch steering wheel now equipped with a more precise rack and pinions system. Two auxiliary gauges were also found in the center dash and by the door. No center console was found aboard, and the five-speed transmission gear lever gate was exposed like it should be in any proper Ferrari. 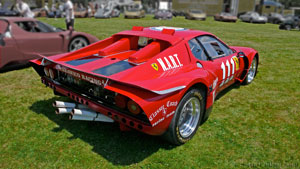 The engine was a little revelation because it was the first flat 12 cylinder for a production car. Both cylinder banks were flat and opposed to each other at 180˚, but even if it was evoqued in its name, the "BB" didn't have a Boxer engine but a Flat V12 due to its pistons not being opposed when in motion. Unlike the Dino program, the engine was placed longitudinally, but to not end up with a long tail, the gearbox was fitted underneath the engine giving it a high center of gravity, not ideal for cornering. The flat four-cam 12 cylinder engine had the same capacity as the 4.4 liter (268 cu in) V12 Daytona and developed 380 hp at 7200 rpm. This propelled the Berlinetta Boxer from 0 to 62 mph in 5.4 seconds, while the top speed was 175 mph (282 km/h), falling short of the factory claimed 188 mph (302 km/h). 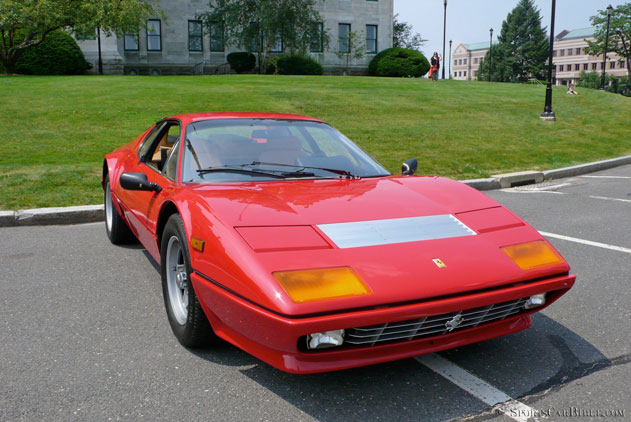 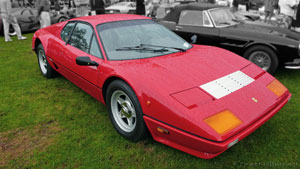 In 1976 the first evolution arrived with the Ferrari 512 BB, now the nomenclature revealed the engine size and number of cylinders, not the capacity of a single cylinder in cubic centimeters. But in perfect Italian fashion (I caught a fish that big!) the engine was closer to a 4.9 liter (302 cu in) instead of a 5 liter. Still fed by four triple choke Weber carburetors, this bigger engine had a dry sump unlike the unit found on the 365 GT4 BB, but it also was more restricted with 360 hp at 6800 rpm; none the less, it had 10% more torque and was more drivable around town. To increase handling, the rear track was widened and the rear suspension was revised; a front spoiler lip was also fitted to stop the unsettling front-end floating effect felt at high speed. 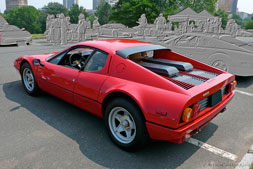 The visually challenging six taillight and exhaust pipe configuration was gone and replaced by a dual set of each unit. A NACA air duct was also added in front of the rear wheel below the belt line, channeling air to the rear brakes. Performance was on the slight decline with a top speed of 168 mph (270 km/h) and 5.6 seconds were now needed to reach 62 mph from a standstill. 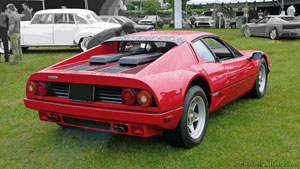 The third and last evolution came in 1981 with the adoption of injection. Now called the Ferrari 512 iBB, it retained the 4.9 liter flat 12, but once again the power suffered due to this new technology. What the 512 iBB gained though was consistency in its tune up and a better get up and go around town. With 340 hp at a lower 6000 rpm it still managed the same top speed as the 512 BB, but 5.9 seconds were now needed to reach 62 mph. 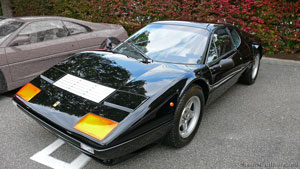 On the outside, the 512 iBB shed its lower black tone for a matching color coded body paint. New smaller side mirrors were also fitted and additional parking lights were placed on each side of a now smaller grill. The alloy wheels received a central lock bolt nut, but it was the adoption of the first low profile Michelin TRX tires that changed many of the 512 iBB bad rear “breaking away” behaviors in hard cornering situations. This solution gave a somewhat happy ending to Ferrari’s first mid-engine supercar even if the BB was never sold to the American market due to emission issues.

After a total of 2323 Berlinetta Boxers were produced between 1973 and 1984, the BB never stood up as the historically pivotal car that Ferrari had intended. Today the BB’s previous front engine V12 sibling, the Daytona, is the one considered as a cult classic even if considered “old fashioned” at the time, funny how history writes its own ironic twists sometimes.