Ferrari’s reputation for top-end sports cars was fast arising, and the lucrative American market was already hooked on Ferrari’s expensive street masterpieces. These American customers needed bigger and torquier engines with more luxurious appointments. So the 340/342/375 America series blueprint (visit file) was kept to inspire the creation of the 1955 Ferrari 410 Superamerica. 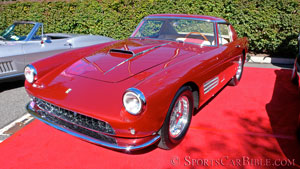 The ladder tube chassis received a longer wheelbase of 2800 mm (110.2 in) and was widened as well. The engine was still the “Long Block” Lampredi single-cam V12, but it was now bored out to a 5 liter (303 cu in) unit and developed 340 hp at 6000 rpm. Like the “America” series, all 410 Superamericas were handmade by different coachbuilders, and all are different even when styled by the same designer. Available in coupe or cabriolet, the 410 Superamerica was mostly dressed by Pinin Farina who took inspiration from his previous creation, the 1953 Ferrari 250 Europa. In general, the 410 Superamerica received imposing front side slated fender air vents, a low roofline, and a panoramic rear window. Although most 410 Superamericas received exposed vertical headlights some later on received profiled covered units. As usual, Borrani wire wheels were fitted, and for a better ride on long journeys, front coil springs replaced the antiquated old spring leaf system. 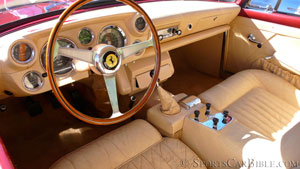 The interior could also differ from one another, but Veglia dials and the usual wooden three-branch Nardi steering wheel was part of the package. 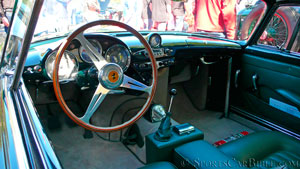 The 410 Series III, 2600 mm (102.4 in) shorter chassis was used, but here the power reached new heights with a claimed 400 hp now giving a top speed over 150 mph (241 km/h). The 0-60 mph was achieved in an incredible 5.5 seconds instead of the 6.5 seconds done by the first series. The series III was produced at 12 units only, totaling the production of the 410 Superamerica series at 34 cars before its replacement came under the name of the 400 Superamerica.