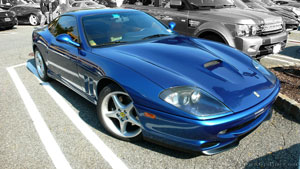 After Enzo’s death in 1988, Luca Cordero di Montezemolo was promoted to Ferrari’s president at the end of 1991 by Fiat’s chairman Gianni Agnelli. The last 12 cylinder Ferrari flagship was the mid-rear flat 12 engine Testarossa series (1984-96), which succeeded the previous Berlinetta Boxer series (1973-84), also designed with the same engine layout. This gave us 33 years of mid-rear flat 12 engine layout domination over the older front engine setup found on the Daytona (1968-73). Arriving in 1996, Luca di Montezemolo would reverse all that with the Ferrari 550 Maranello.

This time around the 550 nomenclature referred to the engine’s capacity of 5.5 liter instead of the 4.9 liter (referred to as a 5 L) in the Testarossa. The V12 was actually based on the same 65˚ V12 quad-cam, 48 valves engine from the 456 GT, and was fitted with a rear transaxle transmission for better weight distribution.

Pininfarina was in charge of designing the 550 Maranello, but this time the result didn’t quite awe the crowd as the Daytona did in its day. Gone was the pop-up headlight era and in were the aerodynamically rakish covered glass headlights. The front bumper was a little busy with a grill including additional driving lamps inserted at each end of the “smiley” grill. Underneath the driving lamps were front disc brake air scoops seeming to interlace with the grill. But the main oddity on the 550 Maranello came from the single insect like air intake nostril located right in the middle of the hood. Two side air vent slats behind the front wheel arches gave the 550 an air of 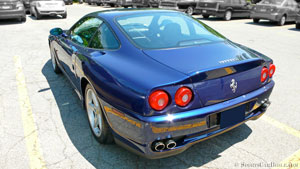 250 GTO, while a single air intake placed on the top left fender was there to cool the brake radiator. The new rear window treatment lost the flying buttresses for a (almost) fastback rear design, and it looked particularly good with thin pillars all around. But not to everybody’s liking, the trunk’s raised center section, gave with the integrated rear spoiler, a funny wavy “Marcos/BMW Z4 1st series” look to it at first. The taillights were the traditional quad-round lamps, and underneath it and enveloped in the rear bumper were the quad-tailpipes… nothing really new here, but still pleasant to see as usual. 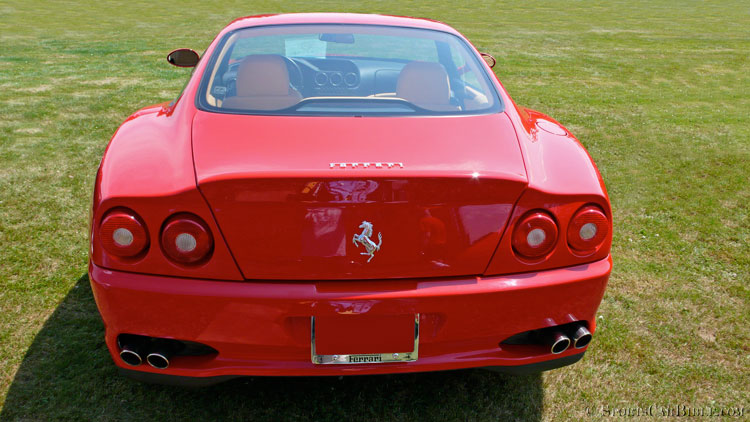 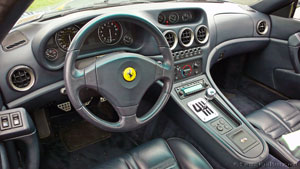 The interior’s design layout wasn’t all joy either, it incorporated a weird recessed center top dash binnacle housing three auxiliary gauges including the clock that almost looked like an afterthought. Underneath it three new large round chromed bezel air vents looked indestructible, while another one at each opposite side of the dash improved the interior’s quality started by the 1992 Ferrari 456 GT. The interior’s design was a little busy not to say clumsy, even if the stereotypical 6 speed exposed metal gate gear lever replaced the five gear ratio found on the Testarossa, and the three branch air bag steering wheel was less bulky than the F355 four branch unit. The two deep bucket seats with the optional “Daytona” two tone color strips could be ordered giving a little sunshine to this all leather environment. At the back no rear seats were in sight, just a parcel shelf for your luggage. 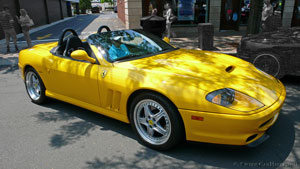 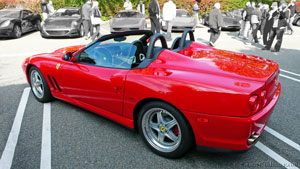 ABS was found as standard, as well as the traction control (ASR), and with three different level settings you could opt for “Normal”, “Sport” or just simply “Off” for a little fun at the track. To help keep this fast stallion on the ground at high speed, a flat undertray generating downforce was fitted, while the front track was wider than the rear, to get this front engine monster into corners without much understeer. This agility was easily made possible with the 550’s superb weight distribution. 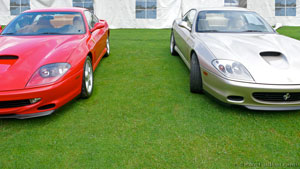 In 2002 Ferrari introduced the 575 M (Modificato) Maranello as an evolution. The Ferrari 575 M Maranello had an enlarged V12 engine of 5.75 liter (351 cu in) now producing 515 hp at 7250 rpm. It also was available with an optional six speed F1 sequential transmission, with paddle shifters behind the steering wheel allowing upshiftings in 200 milliseconds. 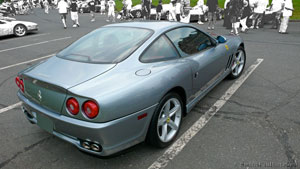 The throttle also went from a “normal” cable system in the 550 to an electronic throttle body actuators in the 575M. With all these new goodies the 575M was able crush the magical 200 mph barrier with a impressive 202 mph (325 km/h), while 4.2 seconds was now needed to get to 60 mph due to its more powerful engine but also lighter weight than the 550 M. 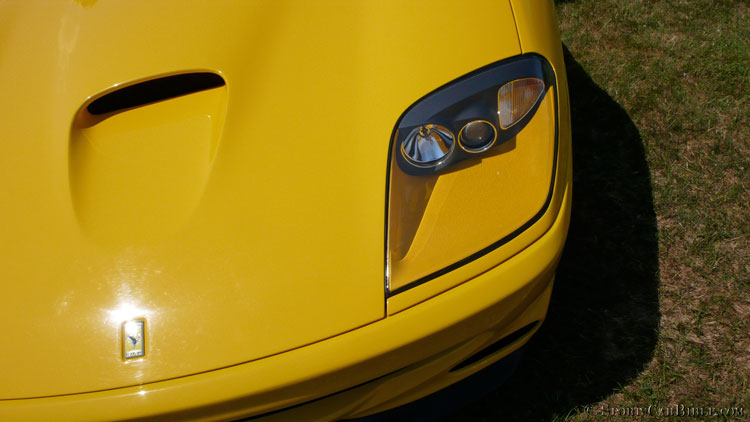 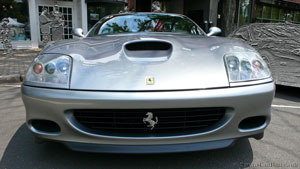 On the outside a new and visually cleaner bumper as well as redesigned xenon headlights gave a fresh look, something also achieved by the optional 19” wheels. Although with age the 550 Maranello front bumper design is maturing rather well and gives a more pointy and attacking feel to the 1st Maranello generation.

Inside, the dashboard was completely new and received a less clumsy 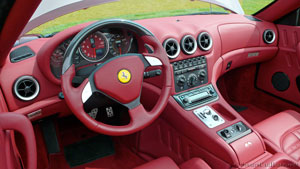 three branch steering wheel still equipped with an air bag. The dials on the main binnacle were rearranged with a big rev-counter dial fitted right in the middle of the binnacle. The three smaller dials on the center dash were removed to only showcase the three rounded interior air vents now enveloped within the top dash. The center/tunnel console received minor changes, but it all added up to a cleaner and less intricate as well as a more symmetrical design.

For 2004 the optional “GTC handling pack” replaced the “Fiorano” pack which tried to give a better handling to the 575. With stiffer and lower suspensions, and with thicker anti-roll bars, as well as composite ceramic brakes under the five spokes 19” split rims wheel set, the GTC handling pack was a step forward in terms of driving dynamics than the Fiorano pack. It was also much louder, thanks to a sportier “GTO tip” exhaust system also included in this package. The only problem was that the GTC handling pack cost the same as a small top of the line compact car, but I guess this was part of the fun… I think. 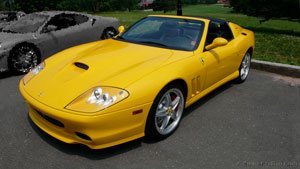 In 2005 Ferrari revived the “Superamerica” name adorned on the handmade 1955 and 1959 Ferrari 410 and 400 Superamerica. The Ferrari 575 M Superamerica was a limited production model of only 559 units, and had an upgraded engine producing 540 hp at 7250 rpm. The manual six speed transmission was still available, but most owners did order the un-evolving F1 sequential gearbox. The other major changes could be seen from the outside with a new swiveling electrochromic glass technology tinted roof. This new roof could change opacity at the driver’s demand, 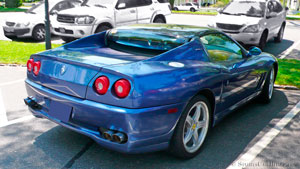 and pivoted on its rear axle, allowing the roof to fit flat on the rear lid in 10 seconds. When down, the glass roof fitted snuggly surrounded by long rear buttresses added on the 575 Superamerica because no rear quarter side windows were fitted on the Superamerica. Ferrari would love us to believe that the 575 M Superamerica was the fastest convertible in the world, but the Superamerica was a “Targa” model at heart with its vertical rear window, and full height rear pillars. 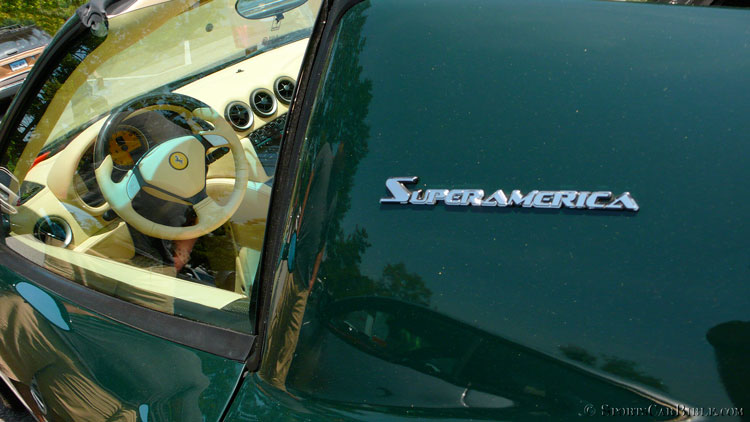 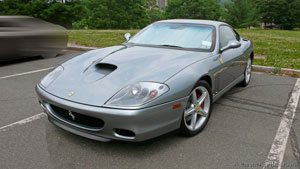 In 2006 the last Ferrari 575 M Maranello rolled out of… well Maranello Italy, leaving us with a front engine Ferrari flagship lapping 4 seconds faster than the previous mid-rear engine Testarossa at the Fiorano’s track (Ferrari’s race track). But this wasn’t the end of the 550/575 Maranello saga, because in 2006, Yoshiyuki Hayashi, a fervent Japanese Ferrari collector, ordered with Ferrari’s permission, the right to have Zagato create a one-off Zagato model based on the 575 platform and named the 575 GTZ. This project was supposed to revive the beautiful lines of the 1956 Ferrari 250 GT Zagato. Well the end result is open to 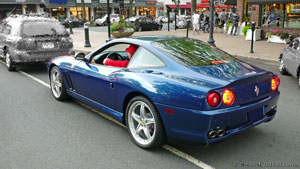 discussion, and beauty is definitely in the eyes of the blind beholder. The dual-tone 575 GTZ looked more like a bad neo-retro Corvette with the stereotypical Zagato trademark with “everything Zagato on it”. The 575 GTZ adorned Zagato’s famous double-bubble roof line, a rear quarter side window top angle that ungraciously joins the top rear window angle. To add to the awkward GTZ’s looks, the rear-end could have been mistaken for the front-end. The 612 Scaglietti headlights were also fitted on the over-curved fenders. With this over-pouring of tacky creativity Zagato’s house of style was still able to find 5 more customers who were willing to pay upwards of seven figures for his creation.

Not satisfied with this first batch of six 575 GTZ, Zagato went on to create a Roadster GTZ based on the 550 Barchetta. For that, the famous house of design bought 5 used 550 Barchetta to build their 550 GTZ Roadster in 2008. The used Roadsters were reportedly sold at a cool 1.1 million Euros, or $ 1.6 million dollars! 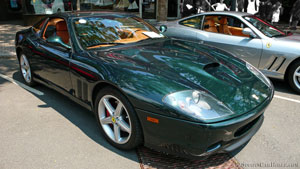