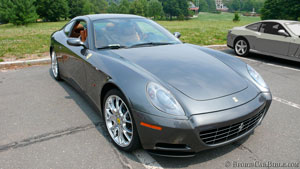 Ferrari has a long tradition of offering a four-seater Grand Tourer coupe in its production lineup, and after the compact, classy, and beautiful 456 M GT it was time to unveil the new 2+2 contender in 2004 with the Ferrari 612 Scaglietti. The name Scaglietti refers to Enzo Ferrari’s favorite coachbuilder and creator of the 250 GTO and 250 Testarossa to only name the biggest Ferrari legends of all time. 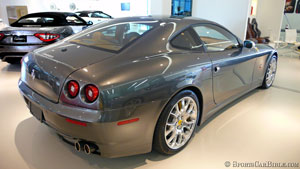 After Ferrari acquired Sergio Scagiletti’s factory for production purposes, the new 2+2 was named after him. As for the 612 nomenclature, which supposedly identified this car as a 6 liter with a 12 cylinder engine, but the 612 Scaglietti really had a 5.7 liter (351 cu in) V12… it must be an Italian perception of life like the fisherman has his own perception… “I caught a fish that big!” 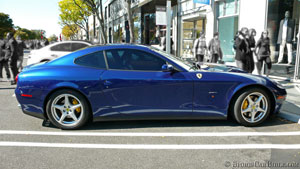 With this out of the way it is good to mention that the 612 was the second Ferrari after the 360 Modena to benefit from a full aluminum construction from its chassis to its body panels, courtesy of the American aluminum company Alcoa. The design was given to Pininfarina for a change, but sadly for us Pininfarina must have had Scurvy, Malaria and Leprosy at the same time and wasn’t in his best inspirational mood on this stylistic 2+2 exercise. Some of its inspiration came from the 1954 one-off Ferrari 375 MM offered by Roberto Rosselini to actress Ingrid Bergman with its scalloped flanks, but if you ask me, the recessed flanks 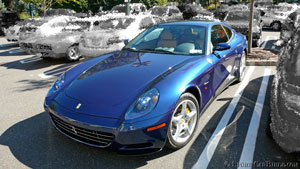 look more like the ones found on a more compact 1956 Chevrolet Corvette. The bulged front fenders had a “folding line” at their tops, and the pointy headlights, also following that fold, ran down and underlined the egg

crate grill (welcome back) with a chrome prancing horse on it. The overall length of the 612 Scaglietti was much longer than the 456 that it replaced with an extra ~ 6.8 in (17.2 cm) length increase, while the extended wheelbase of ~13.8 in (35 cm) made this new 2+2 quite a chunk of a GT. The “fastback” styled rear window was fitted to better accommodate rear passengers, and the trunk lid opened to a 26% roomier cargo space than the one found on the 456 GT. Although the traditional quad-round tail-lights looked a little too small, and were placed a little too high and outwards on the rear panel. Underneath the tail-lights were the usual quad-pipes with a shallow rear diffuser in between them. It is quite obvious that the 612 Scagiletti wasn’t the most elegant Grand Tourer with its challenging big proportions, but everything made sense inside with enough space to accommodate two adults in those deep rear bucket seats… something that the sublime 456 could never do. 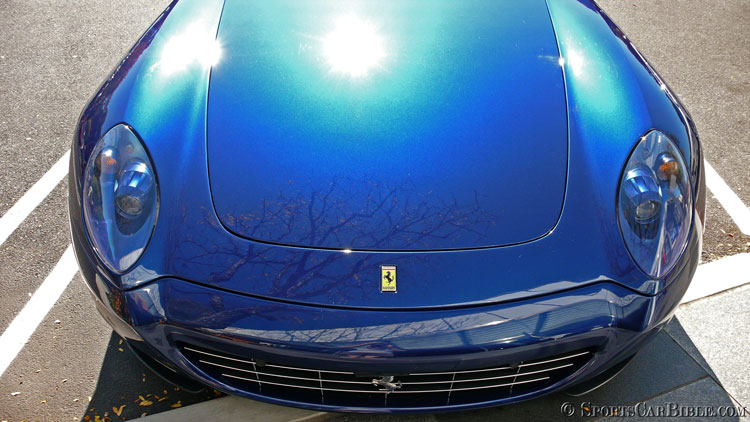 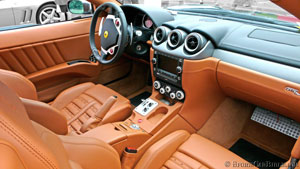 The 612 had the most beautiful dashboard of Ferrari’s lineup with a deep binnacle and a mix of analogue and digital dials. The interior round air-vents were protuberant but fitted nicely into the cabin with overlapping leather padding flowing onto the three central vents. The center console had a state of the art Bose radio system with a dual climate zone AC/heater control unit under it. On the tunnel console you could find the rare but still available six speed exposed clinking metal gate, or the F1A (A for auto) six speed sequential gearbox controlled via paddle shifters behind the steering wheel. Also on the steering wheel was four buttons for the digital display modes, and the sport setting, which firmed up the suspensions, and sharpened the throttle response. Also on the steering wheel was the traction control (CST) on/off button giving you full control over this 46/54 front to rear weight distribution four seater, but you were better off with this last one on if you didn’t know what you were doing. 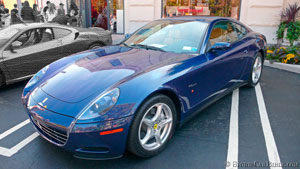 Aside from the 308 GT4, every family man Ferrari had the engine placed at the front, but this time it was set all the way at the back of the front axle giving the 612 Scaglietti a mid-front engine configuration, thus giving it its good weight distribution also helped by its rear transaxle gearbox. As mentioned before, the V12 had a 5.7 liter (351 cu in) capacity and came straight from the 575 Superamerica with its 540 ps/533 hp at 7250 rpm. With this power output and the help of the launch control mode, it propelled the 612 to 60 mph from a standstill in 4.2 seconds, while the top speed was 199 mph (320 km/h). 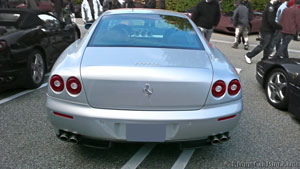 In 2006, the first Ferrari importer from Japan, Cornes & Co, celebrated its 30th anniversary with a limited edition 612 simply named the “Cornes 30th Anniverasry Edition”. This batch of only 20 units received a specific “Blue Cornes” finish, carbon fiber fuel cap, and meshed grill accents at the front and rear-end. All “Cornes 30th Anniverasry Edition” 612s were sold to Japanese customers only and were all fitted with the HGTC handling pack normally offered as an option. 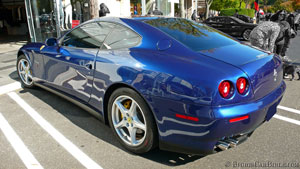 To celebrate another anniversary, this time Ferrari’s 60th anniversary, a special and limited Scaglietti edition called the 612 “Sessanta” was offered at only 60 units in 2007. This latest 612 had a dual tone paint job, specific 19” wheels, and as the one-off 612 “Kappa” and its hood air scoops created in 2006, it also had a full electrochromatic fixed roof, which could be rendered more or less opaque as seen first in the 575 Superamerica, then on the 612 Kappa.

For 2009, the 612 received some updates with a start button now placed on the steering wheel, as well as a “Manettino” switch seen the first time on the F430. The Manettino offered three selection modes ranging from “Comfort” to “Sport”, which reduced the up-shifting time to 100 milliseconds of Ferrari’s updated “Superfast” F1 automated transmission. Sadly the manual gearbox was no longer available, but it now only took 4 seconds to get to 60 mph from a standstill. Also updated was the Bose “Infotainment” and navigation system, as well as the panoramic glass roof equipped with the electrochromatic variable opaque roof that was also fitted on the Sessante edition. 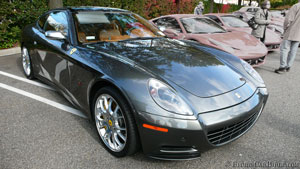 One last one-off 612 Scaglietti, named the “GTS Pavesi” was executed in 2010 with a dual tone paint job, front spoiler lips and two removable carbon fiber roof panels giving the GTS Pavesi a T-top roof with the panels off. The 612 GTS Pavesi engine produced 550 hp at 7250 rpm, and adorned the F430 Scuderia BBS wheels as well as the HGTC handling pack.

The Ferrari 612 Scaglietti won’t go down in history as the most harmonious four seater made at Maranello, that title is maybe left to its predecessor, but its build quality, aluminum space frame rigidity, ride and composure are sure in a different league than the 456 GT. And when talking about seating four adults in luxury, that is a title that can’t be taken away from the 612 Scaglietti.