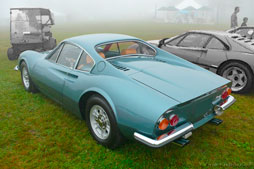 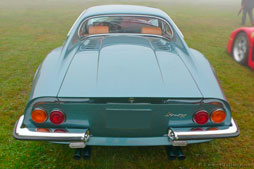 After the debut of the delicious little mid-engine Dino 206 GT, orders were pouring in, while the competition, coming from Porsche with their 911 was getting stiffer. Ferrari needed to produce the Dino in greater quantity and add more power, so the “Ferrari” Dino 246 GT replaced the 206 GT as soon as 1969. 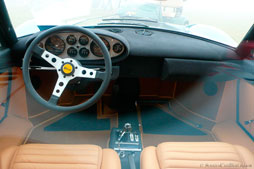 Like the 206, the Dino 246 GT didn’t have any Ferrari badges because Enzo wanted to brand it as such to differentiate it from its V12 top of the line models. As in the previous Dino, the 246 nomenclature referred to the engine capacity (2.4 Liter) and the number of cylinders (6). Based on the same design done by Aldo Bravarone working then at PininFarina, the chassis was stretched 6 cm (2.36 in) making a total of 2340 mm (92 in) at the wheelbase. The all around disc brakes and independent suspension gave a good and safe ride quality but the car was now heavier due to its steel panels needed for a greater production run instead of the all alloy body found on the 206. 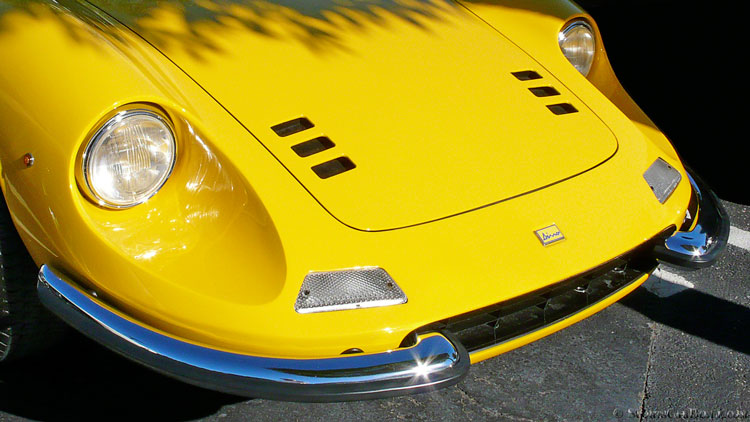 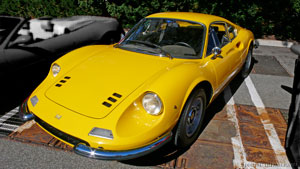 PininFarina’s longer wheelbase Dino was still an accomplishment though! It had the same victorious P4 flair, with a very low hood and deeply sculpted headlights sometimes seen covered by Plexiglas elements on very curvaceous front fenders. Trapezoidal turning signals were placed at the tip of the nose (flushed in EU - vertical in USA) and two sets of three horizontal air interior vent intakes were located on the hood. Viewed from the profile, the Dino looked like rolling waves, while the conical air intakes on the rear fenders starting at the doors, were a 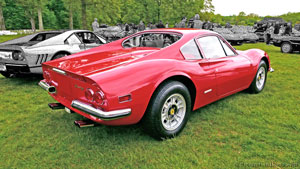 masterpiece by themselves. The horizontal engine lid was surrounded by rear flying buttresses, making a smooth transition from the roof to the rear with a vertical panoramic rear window that allowed the driver to see out of the rear quarter side windows. The Kamm-tail had a tiny rear spoiler lip with two round taillights on each side accentuated by thin split bumpers also found at the front with a central rubber strip. To keep on breaking with tradition, only two exhaust pipes found their way at the back. 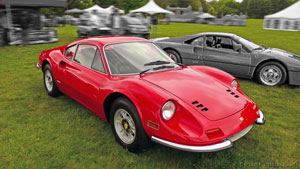 The interior design was inspired by the Daytona with its Alcantara (faux-suede) covered dashboard for some markets. The oval binnacle included eight Veglia gauges, and vent sliders were found in the middle of the dashboard with no center console in sight. 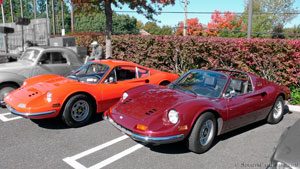 The five-speed dogleg (1st bottom left) transmission had an exposed gate gear lever and the still tight interior space was also limited with a low roofline but at least you were snug in bucket seats like in the 206 Dino. Gone was the leaky troublesome V6 Ferrari 2 liter (121 cu in) alloy engine from the 206 Dino, in its place was an enlarged, stronger but heavier cast-iron block V6 Ferrari based engine built by Fiat. It was transversally mounted in front of the rear axle, had one plug per cylinder, dual-cam with only two valves per cylinder, and was enlarged to 2.4 liter (148 cu in) capacity giving an extra 15 hp for a total of 195 hp at a lower 7600 rpm. This allowed the Dino 246 to get to 62 mph in 7 seconds with a top speed of 152 mph (245 km/h). All this was mainly possible with the torque increasing from 138 lb-ft at 6500 rpm to 166 at 5500 rpm, making the 246 Dino a more “launchable” and tractable sports car around town. 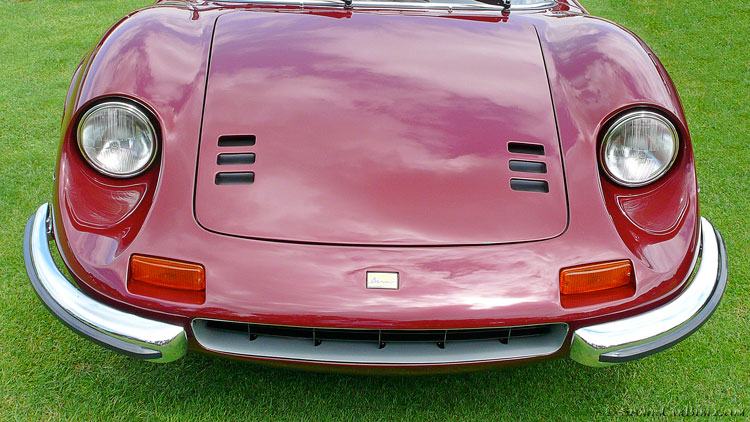 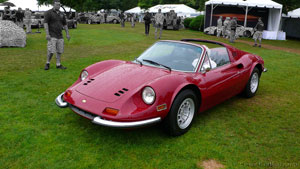 Three series would be built for the Dino 246 starting with the “Tipo L” as the first of the bunch. This first series had knock-off wheel caps to secure its Cromodora alloy wheels, and an aluminium hood and trunk lid. 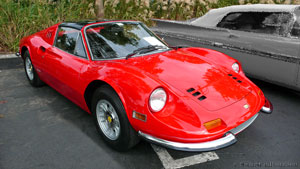 The second series called “Tipo M” arrived in 1970. It had a revised chassis with a wider rear track of 1.18 in (3 cm) and a new three calipers ATE braking system replacing the previous 2 calipers Girling units. Unlike the first series it was all steal built, had its Cromodora wheels now secured by five bolts, a better interior finish with headrest now integrated in the seats instead of the rear bulkhead, while the doors also received side pockets. And for the first time the Dino 246 was available in right hand drive. 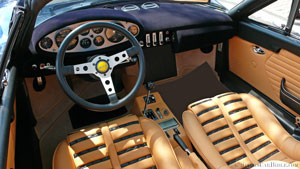 In 1971 the last series “Tipo E” was introduced with optional two-tone Daytona seats and wider wheel arches to accommodate wider Campagnolo magnesium wheels (Chairs and Flares). If these options weren’t specified, you could identify a third series by the front bumpers now stopping at the edge of the grill instead of slightly lapping over it. The air intakes under the front bumpers were now thinner and rounder. The scissor motion windshield wipers were replaced by a more conventional motor movement, and the door lock was relocated under the side conical air intake instead of being fitted in it. To conclude, the rear license plate lights were now fitted on a chrome strip on the boot lid edge instead of the being found at the inward tips of the split bumpers. 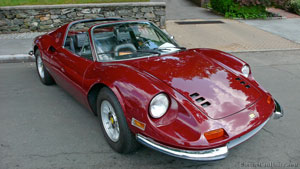 In 1972 the Dino 246 GTS (S for Spider) was introduced with a removable “Targa” rooftop, which could be stored behind the seats making the V6 symphony more exhilarating when driven through tunnels. But the open roof compromised the Dino’s rigidity even with a reinforced chassis. Unlike the last Series III (1971), the GTS (1972) could be found with front bumpers overlapping the grill. The three-quarter rear side windows were deleted and were replaced by three vertical interior exhaust air vents matching the ones found on the front hood, and gave the 246 GTS its own identity under the sun. 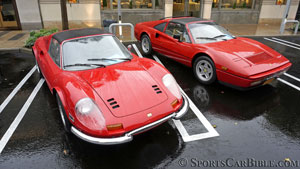 The Dino 246 GT and GTS production ended in 1974 with 3761 Dinos produced, including 1274 GTSs. And all of this Italian sexiness could be had at a slightly higher price than a 911, this made the Dino the last super bargain offer from Ferrari and oh man… that’s a lot of beauty and badge for your buck! 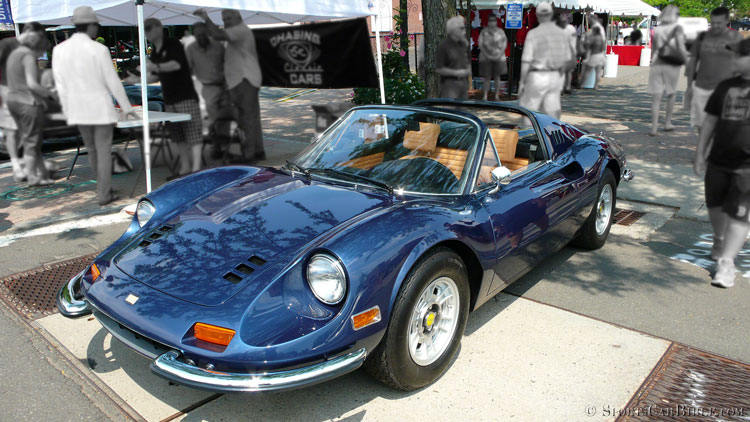