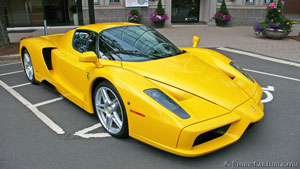 It had been five years that Ferrari didn’t offer a Supercar or should I now say Hypercar to the public. The last emperor was the all carbon fiber F50 and its 520 hp giving it a top speed of 202 mph (325 km/h). It was 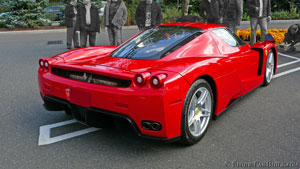 also said that it would be the last Supercar Ferrari would produce due to more stringent safety and emissions laws on car manufacturers… but technology has its way around problems and in 2002 the new Ferrari Supercar was introduced with a familiar name… the Ferrari Enzo. 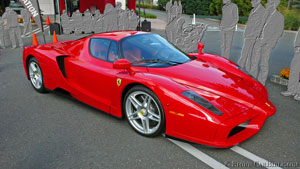 Directly influenced by Formula 1 and designed by Pininfarnia, the Ferrari Enzo had an all spaceframe carbon fiber chassis with a safety cell like on sport prototype racing cars. In addition to the chassis, an all carbon fiber body gave the Enzo a remarkable total weight of only 3009 lb (1365 kg). The Enzo had like the F50, a reminiscent long and pointy F1 nose, and two large air intakes on each side of the bumper with a lower 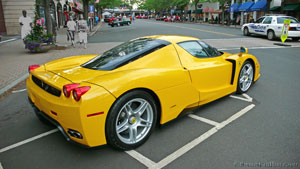 bumper lip joining the nose higher, also a F1 styling cue. The headlights were thin and elongated with a front body depression on each side of the “F1” nose to add down-force on the front axle. The front fenders received brake air vents located after the wheel arches. The windshield was very curvy and rakish with huge fixed side window vents like on the F50. But the doors were a first for Ferrari because they adopted a Scissor/Gullwing hinged mechanism allowing for better entry and exit… watch out Lambo. 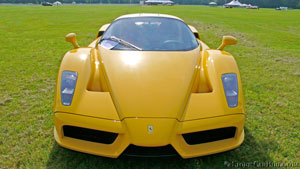 On the rear side fenders two air intakes were fitted, with one on the lower sill part, while the enormous main engine intake sat at the top of the fender. Unlike the 288 GTO and F50, the Ferrari Enzo didn’t have rear flying buttresses, but a fastback design fitted with a clear rear engine cover lid to marvel at the beast. On the controversial side, the quad-round taillights differ from the traditional units because they were semi-encased into the rear panel and looked odd with their top elements exposed. Between the taillights was a black meshed grill helping the engine cooling 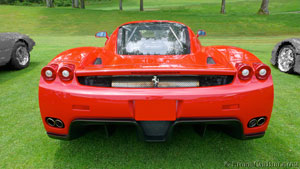 process, and was adorned with a chromed prancing horse logo at the center, below it the two venturi exits, and the usual quad-pipes enveloped in the bumper. Again, unlike the F40 and F50, the Enzo didn’t have a sky-high rear wing but a small variable rear spoiler electronically operated. This system of flaps with variable openings was also found at the front undercarriage and was here to channel air onto the flat undertray creating most of the Enzo's down-force. 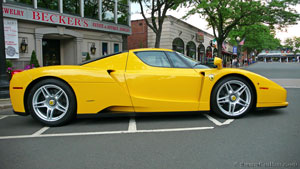 The undertray venturi created so much down-force actually that at 186 mph (300 km/h) it totaled a spectacular 1708 lb (775 kg) of downforce spread on both axles. Then if you were lucky to find a straight long enough, the computer would reduce that down-force to 1290 lb (585 kg) to allow the Enzo to reach its top speed of 217 mph (350 km/h). At these speeds stopping power is crucial, so Ferrari fitted under their 19” dual five spokes wheels, a Brembo assisted carbon ceramic disc measuring 380 mm (15”) wide at the front with ABS insuring maximum fading free braking power. 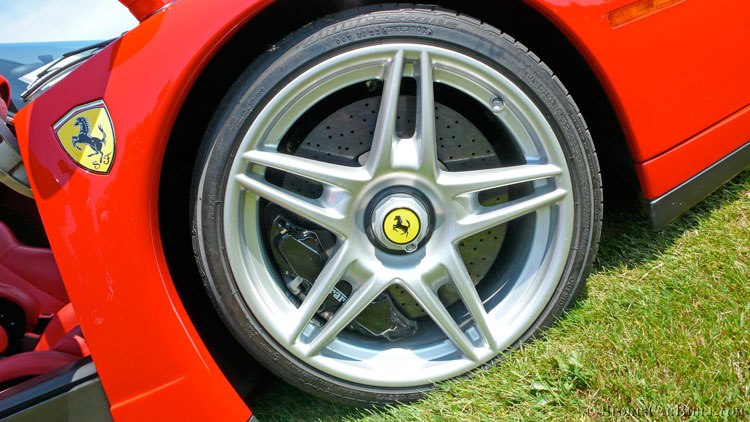 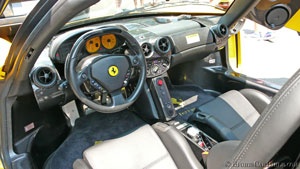 The interior was an abundance of carbon fiber with surprisingly leather covered racing bucket seats with other leather accents here and there. The gauges with body color-coded matching backgrounds were a mix of analogue and digital dials placed under a carbon fiber binnacle. In between the racing seats was a center console housing the start button, lights and electric side mirror switches, while the now assisted steering wheel had six buttons ranging from the “front nose lift” button, to the driving mode settings including the traction control (ASR) on and off 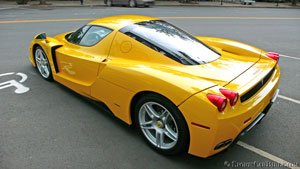 button. At the top of the steering wheel were five “up-shifting markers” LEDs with behind the steering two F1 paddle shifters with a longer right up-shifting paddle. It only took 150 milliseconds for the sequential six speed transmission to up-shift, and unlike other Ferrari sequential gearboxes, no automatic mode was to be found on the Enzo. A “Sport” and “Race” mode were the only settings available with an even faster shifting time occurring in race mode with an under 100 milliseconds time. 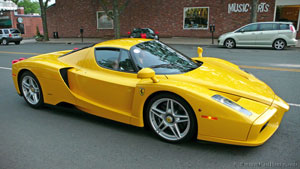 The state of the art engine was a dry sump V12 with four valves per cylinder. Its 6 liter (366 cu in) capacity produced a massive 651 hp / 660 ps at 7800 rpm with a torque figure of 485 lb-ft at 5500 rpm. The V12 received variable inlet and exhaust valves, but a variable intake manifold also helped skyrocket the Enzo with its launch control aid to 60 mph in a 3.5 seconds claimed, but 3.1 seconds have been recorded by independent testers, while the 1/4 mile came in 10.8 seconds with 6.6 seconds needed to reach 100 mph!

Part of the F50 criticism was over the fact that no bushing and assistance was used to give F50 owners a more authentic F1 experience than in the F40, but the noise and vibration created by the engine was a bit too much for road use so the Enzo's engine was placed on a subframe to absorb some of the engine rawness. As mentioned above, the Ferrari Enzo had a few driver’s aids systems like the launch control, but mainly the onboard computer gave the Enzo its proper suspension firmness with its adaptive “Skyhook” dampers, throttle response and traction without forgetting its aerodynamics. 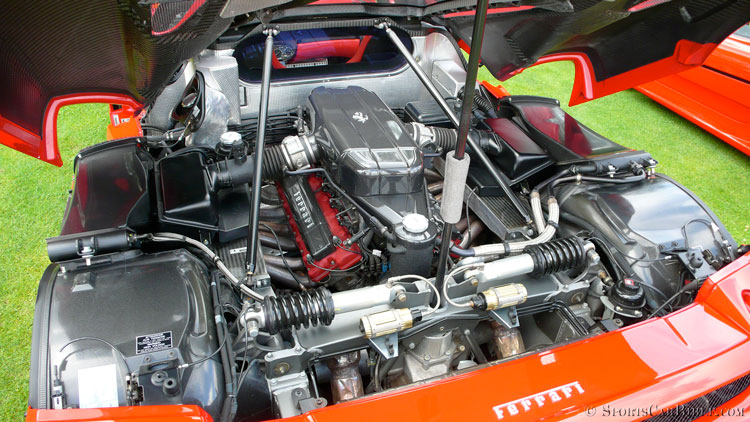 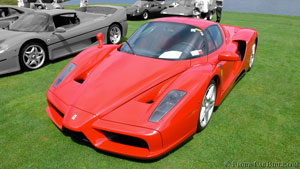 The last Ferrari Enzo left Maranello in 2004 after 399 all left hand drive Enzos were produced, thus 50 more than planed plus one extra sold at Sotheby’s to help the 2004 Tsunami victims.

In 2004 Ferrari introduced the Ferrari FXX, which was a track development project based on the Enzo. Produced at 29 units the FXX had a larger 6.3 liter (382 cu in) V12 producing 800 hp at 8500 rpm. On the outside the FXX could be identify by its single Xenon small round 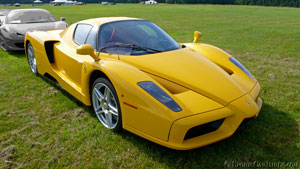 headlights, whale tail with extended flaps, and its white central stripe. Dedicated customers were the only ones offered the opportunity to own a FXX but no delivery took place as all the FXXs stayed at Maranello and were taken to different tracks by the factory as an evolutionary development test car for the next Ferrari Hypercar… I’d say with your own money as usual! With track recorded data to improve the breed, the FXX “Evolution” came in 2008 and produced 860 hp at 9500 rpm with a now F1 sequential shifting time of 60 milliseconds instead of the 80 done by the FXX. 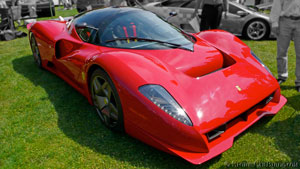 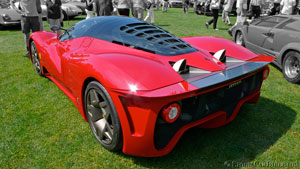 1967 in front of the Ford GT40s with the first, second and third podium title. This unique model was also the most beautiful Supercar offered from Ferrari or as Enzo himself would say “… Until the next Ferrari comes along”.

Ferrari P 4/5 - Viewed from the profile the
P 4/5 is more bullet like than the Enzo.
Ferrari P 4/5 - Looks like beautiful hips
accentuated by a sexy bustier to me.
Ferrari P 4/5 - Identical interior as the Enzo aside from
the relocation of the ac/heater controls and transmission
mode buttons for a navigation screen on the center console.
Ferrari Enzo - Once closed, the swooping fastback
clam-shell glass panel still allows you to marvel
at the engine like on the F40s and F50s.
Ferrari Enzo - 6 liter (366 cu in), quad-cam V12
producing 651 hp / 660 ps at 7800 rpm.
Ferrari Enzo - Massive air intakes for a massive engine.
Ferrari Enzo - As the F40, the Enzo's front fenders are
ajar to allow the front brakes hot air to dissipate quickly.
Ferrari Enzo - Some front axle downforce is provided by these cooling
channels directing air upward to push the Enzo's front tire downward.
Ferrari Enzo - Ferrari really wanted to show their F1 connection
on the Enzo but they might have overdone it with the F1 nose .
Ferrari Enzo - 380 mm (15”) Brembo Carbon Ceramic disc
at the front with ABS for a fading free braking experience.