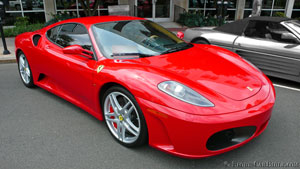 The new replacement for the entry-level Ferrari 360 Modena arrived in 2004 as the Ferrari F430, and like the F355 it was mostly based on its predecessor. The American aluminum company “Alcoa” was again responsible for the all aluminum chassis, this last one was extensively based on the 360 Modena but added a claimed 20% stiffness.

As for the design, Pininfarina was again called upon to restyle what he had started on the 360. The headlights were replaced by thinner and longer units suiting the new little mid-engine V8 much better than the headlights found on the 360. But the design downfall came with the huge ovoid air intakes on the front bumper adopted here to give a “retro-wink” to the 1961-62 Ferrari 156 “Sharknose” F1 racer. Although unlike the 156 Sharknose, the nostril design didn’t work at all on the F430 except for the center aerofoil, which contributed to feed air into the undertray venturies. The dual branch side mirrors, with a depressed “F430” on the driver’s side only, reminded you of the ones found on the flat twelve 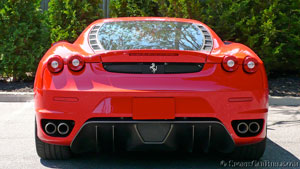 Testarossa, but essentially they allowed for better airflow into the rear air intakes. The side lower air intake channels starting from the doors and ending in front of the rear wheel received a more chiseled entry scoop to it, while the top air intake on the rear fender mimicked the 1963 Ferrari 250 LM with a more vertical and open design. As in the 360 the rear glass window let you marvel at the power plant with a more accentuated rear spoiler, but the semi-encased quad-round taillights, as seen on the Ferrari Enzo Hypercar, didn’t help the overall rear look either. The rear diffuser, with its four visible vertical slats here to also stabilize the 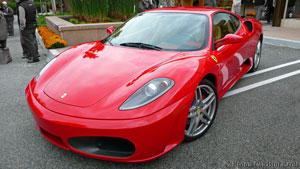 car at high speed, was reworked from the 360 with more downforce available. This gave a claimed 50% more down-force, thus around 600 lbs (272 kg) at maximum speed. Finally the four exhaust pipes fitted more properly into the bumper instead of being off-center and lost in it like on the 360. The new dual five spokes 19” wheel set looked better than the five spokes unit found previously, and carbon ceramic brakes were also available as an option, but the cross drill standard steel units worked just fine as long as you didn’t want to go insane on a track. 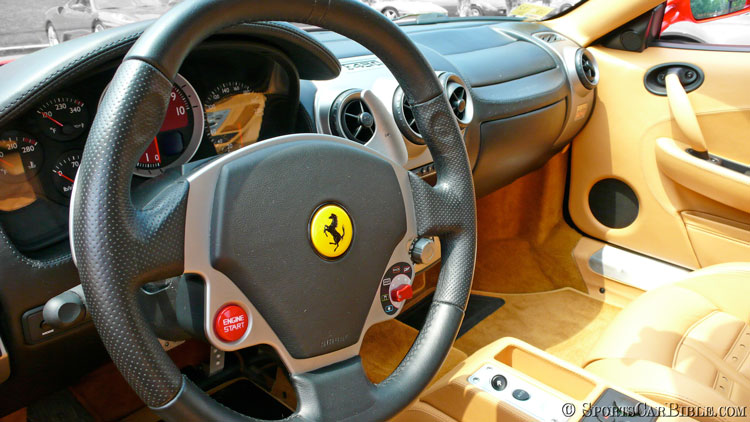 The interior was all new but it also was very reminiscent in design to the outgoing model with the same gauges layout, now fitted under a sun visor. The inside round air vents, and center console were also updated, and again the same layout was used for the radio and AC/heat controls unit

ocated just below the center vents. The F430 interior was as spacious as the Modena with plenty of leg and headroom to go about, furthermore the very useful rear cargo space behind the seat remained and allowed you to fit your golf bag or a duffle bag. The real novelty though could be found on the speed sensitive power steering wheel, with a start button on the left and a “Manettino” switch on the right used by Formula 1 teams for quick access to different car settings and seen here for the first time on a production car. The

Manettino had five settings ranging from “Snow”, where the traction control (CST) was the most active and the gearbox all automated, to “Race” where all aids were tamed only to appear as the last resort if the situation really became out of control, but for the expert drivers and fools an “off” position was also available. But the CST wasn’t the only new driver’s aid on the F430, because selecting a driving mode also affected the responsiveness time of the drive by wire throttle, the new adjustable “Skyhook” adaptive 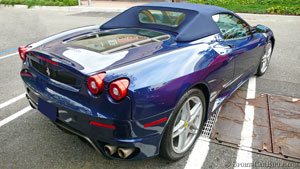 damper also used by Maserati, the shifting response of the new dual clutch F1 transmission, which finally came on its own on the F430, and the E-Diff. The E-Diff was a F1 derived active limited split differential available now on a production Ferrari car for the first time. It insures that the torque was spread evenly depending on steering angle and lateral acceleration giving maximum traction. This trick was also used by the launch control (LC) to get you rocketed from a standstill without leaving half of your tires on the asphalt.

The engine was new and based on the Maserati 4200 GT V8 block, but on the F430 it had a flat plane crankshaft. The five valves per cylinder used on the 360 and F355 were abandoned for a more conventional four valves 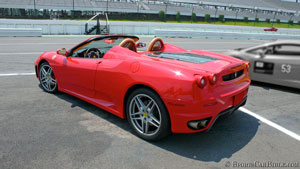 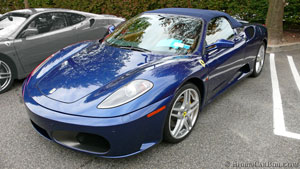 This helped to reduce the Fiorano (Ferrari’s track) lap time to 3 seconds over the Modena. With these numbers 60 mph could be reached in 4 seconds flat, but many independent testers did it in 3.5 seconds. The top speed was an incredible 196 mph (315 km/h), but maybe the most incredible thing was that these numbers were on par with the mythical Ferrari F40, which was until 1992 the best Supercar that money could buy, and still is regarded as the best by many today! 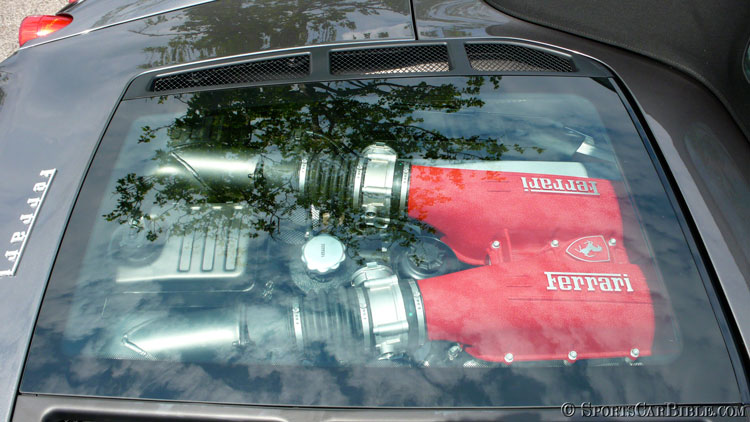 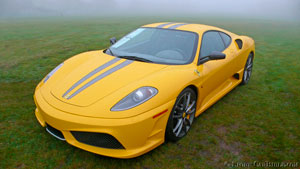 Shortly after the F430 Berlinetta was released Ferrari unveiled the F430 Spider (convertible) in March 2005 with a fully electric soft-top including rear buttresses that could be raised and lowered automatically in 20 seconds. And thankfully to everybody’s enjoyment the new flat engine lid also retained its peeping glass element. 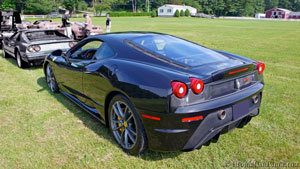 Nothing revolutionary here aside from the fact that the F430 Spider is 154 lbs (70 kg) heavier than the coupe but you would never feel the difference with the Berlinetta except on the track at a very fast pace. The 0-60 mph time for the F430 Spider was 4.1 seconds, while the top speed was 193 mph (311 km/h), which was marginally slower than the Berlinetta.

As with the 360 Modena with its “street racing” version called the 360 Challenge Stradale (street), the F430 also received its hyperactive hooligan brother in 2007 with the 430 Scuderia for “Team” (Racing Team that is, and yes, there’s no “F”). The 430 Scuderia was a stripped-down, lower and stiffer

version of the Berlinetta with a redesigned and instantly recognizable new front bumper adorning new air intakes replacing the “Sharknose” treatment disaster. The new air intakes looked more aggressive with their “mean eyebrow” appearance, but they weren’t as well proportioned as the angular Lamborghini Gallardo design. It still looked far better than the bumper found on the “standard” car, while the 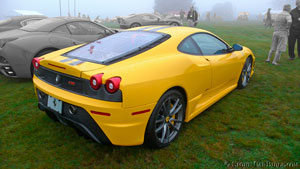 aerofoil on the center front bumper and side air-vent with its new horizontal slat on the side bumper created even more downforce on the front axle. On the novelty side wider side skirts matched the newer and wider dual five spokes alloy wheels, as well as the optional two center stripes. 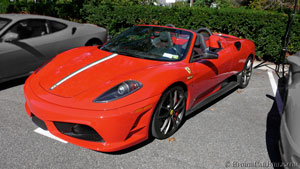 To shed a total of 220 lbs (100 kg) many carbon fiber bits and pieces were used from the side mirrors, to the tunnel console, and interior door panels. The deletion of carpeting and leather was also adopted, while the rear valence was blacked out with only two exhaust pipes now exiting on each side of the license plate to free the rear diffuser of any disturbances. The engine produced an extra 20 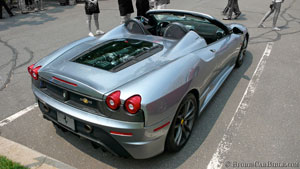 hp for a total of 510 hp at 8500 rpm, but the new differential called “E-Diff 2” matched with the F1-Trac, which ensured stability while cornering, was now linked to the also new and only available on the Scuderia “Superfast 2” F1 transmission with “up-shifting LED light markers” on the steering wheel as seen on F1 cars. This allowed for a faster shifting time of 60 milliseconds instead of the 150 milliseconds required on the “standard” Berlinetta. Also different from the standard “Manettino” 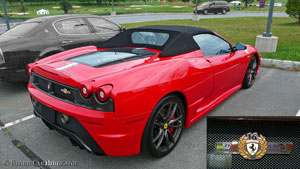 presets, and demanded by a certain Michael Schumacher, was the possibility of independently changing the suspension settings from the Manettino settings by simply pressing on a button located on the tunnel console by the launch control button. With these new improvements the 430 Scuderia could, according to Ferrari, sprint from 0-60 mph in 3.6 seconds and reach a top speed of 198 mph (319 km/h). But more impressively the Scuderia was able to match the Ferrari Enzo’s lap time at Fiorano!? 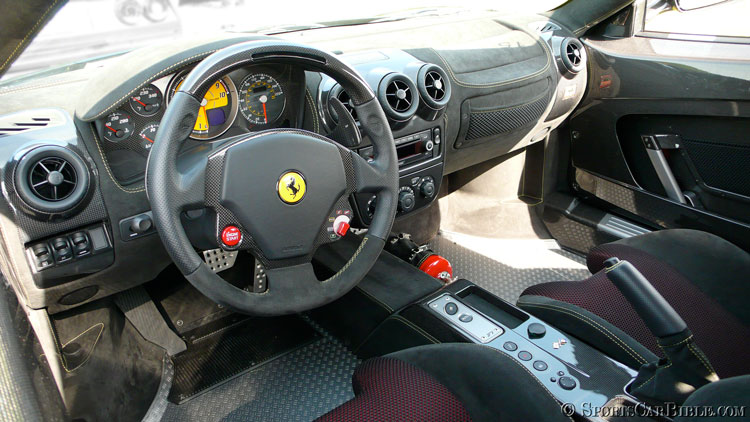 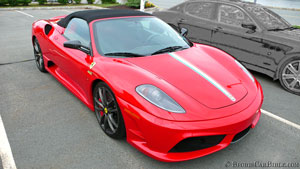 In 2008, Ferrari won their 16th F1 Constructor’s World Championship title, and this gave Ferrari the opportunity to celebrate this event by introducing in 2009 the Ferrari Scuderia Spider 16M (No “F430” nomenclature). The Spider 16M was a limited edition of 499 cars, and it essentially and simply was a Scuderia convertible weighing 176 lbs (80 kg) less than the standard Spider, or also 22 lbs (10 kg) less than the F430 Berlinetta. This allowed the Scuderia 16M to get to 60 mph in 3.7 seconds, while the top speed was 196 mph (315 km/h). 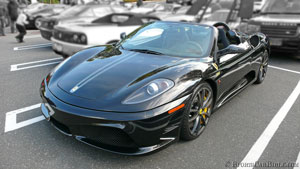 To conclude, in 2008 a one-off project designed by none other than the former Pininfarina designer, Leonardo Fioravanti, who penned the little 206/246 Dino, Daytona and 308 GTB, to name but a few of his design marvels, was hired by Japanese collector Junichiro Hiramatsu, to design a one-off car F430. The project was named the SP1 (Special Project Number 1) and would end-up being the first project done by Ferrari’s new Portfolio Program division, here to cater to demanding customers with lots of disposable income. 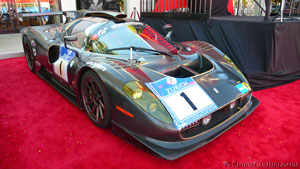 Also in 2010, car collector James Glickenhaus "transformed" a 430 Scuderia into the now famous P4/5 C to go racing in 2011 in an experimental class comparable to the GT2 class. The Ferrari F430 had everything to succeed from its power delivery to its F1 derived transmission and differential. It also was comfortable, and the level of the fit and finish surpasses every production sports car that Ferrari had produced before. Also its handling at the limit wasn’t as vicious as the Ferrari 360, but unlike the F355 its looks didn’t follow with the rest of its technical achievement leaving us longing for the next little Berlinetta.

Ferrari 430 Scuderia - Accentuated rear-diffuser,
relocated exhaust pipes, and a new carbon fiber
rear panel with a wider rear cooling screen.
Ferrari F430 - Standard rear-diffuser and exhaust pipes.
Ferrari 430 Scuderia - Scuderia wheels, front bumper
and massive carbon ceramic wheels.
Ferrari F430 - Standard wheels, front bumper
and ventilated cross drilled steel brakes.
Ferrari 430 Scuderia - The carpet-less interior can be seen
with lots of carbon fiber components including the door panels.
Also the tunnel console was redesigned to accommodate the new
suspension settings allowing you to separate the suspension
behavior from the Manettino modes.
Ferrari Scuderia 16M - Both Scuderias, the 430 and 16M
were fitted with carbon fiber side mirrors, and on the 16M
a side marking was also found on the front fenders.
Ferrari F430 / Scuderia 16M - Differences between the
"Shark Nose" and the "Menacing Eyebrows" front-end.
Ferrari 430 Scuderia - The 4.3 liter V8 producing 490ps/483hp
on the "standard" F430 is now producing 510 hp on the
Scuderia and is adorned with lighter carbon fiber parts.
Ferrari F430 - As on the 360 Modena and
unlike all previous entry-level Ferrari, the F430
Coupe had a "Fastback" rear glass window.
Ferrari F430 Spider - the glass cover design on
the 360 Spiders had been very popular with fans, so it only
was logical that it found its place on the F430 Spider again.
Ferrari F430 Spider - The "F430" marking is only for
the left side-mirror. Note the dual-branch design
allowing better airflow to the rear side engine intakes.
Ferrari F430 - If you want to go on a week-end getaway
here is the front cargo space that you will have to live with.
Ferrari F430 Spider - The Spider had a fully automated
soft-top with flared headrests and roll-bars like the 360 Spider.
Ferrari F430 - The half exposed taillight design cues were taken
from the Enzo hypercar, but it wasn't to everybody's liking .
Ferrari F430 - Here is a F1 transmission model
with shifting paddles behind the steering wheel
and its transmission mode on the center tunnel.