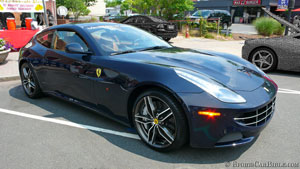 And here is the biggest surprise that ever came out of Maranello, the 2011 Ferrari FF. The Ferrari FF replaced the 612 Scaglietti, thus making it the new Grand Tourer Ferrari four seater, or 2+2. 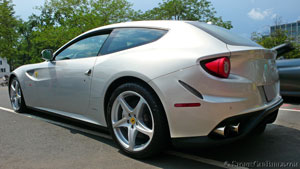 Nothing out of the ordinary so far, but what is out of the box for Ferrari is the fact that the “FF” nomenclature stands for “Ferrari Four”. The “Four” not only stands for the amount of seats available on this new stallion, but it also refers to the four wheel drive system used on the FF, which is a first for Ferrari who always was, and understandably so, rear wheel driven by nature. 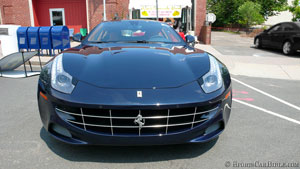 Designed by Pininfarina, the FF is also a big departure in terms of design due to its shooting brake appearance, again making it a definite first for the most intoxicating sports car brand of them all. The headlights are reminiscent of the 458 Italia with their round optical element at their base, while a long stack of three LED columns for the turning signals and dim-lights rise up the curvy front fenders. The wide front grill is very imposing and adorns the older “egg crate” or “fry cutter” grill trim seen since the first Ferraris. 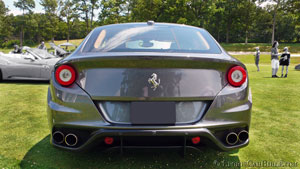 On each lower side of the front bumper, an air intake breaks the FF’s large smile a bit, which is a good thing. Placed on the side front fenders is a triangular side air vent here to dissipate the hot air from the front mounted FF's engine. The rear quarter windows are generous for an all around view and airy feel for the rear occupants. As mentioned the rear was treated as a “sports-wagon” or “Shooting brake” with a hint of BMW Z3 Coupe to it like in any hatchback. 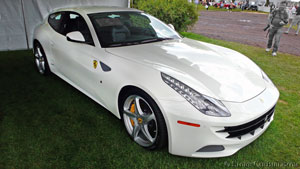 And as any hatchback, the FF's top-hinged liftgate opens up wide allowing for maximum cargo entry… yes I know we are still talking about Ferrari. The single round taillight on each side are taken from the 458 Italia and are accentuated by a surrounding air-vent. Underneath them, and on the FF's side bumper, a second air-vent runs almost parallel to the taillight vents. The FF's quad-exhaust pipes are nothing else than anticipated, unlike the center rear diffuser wing, which is a first on a production car and looks just plain delicious. 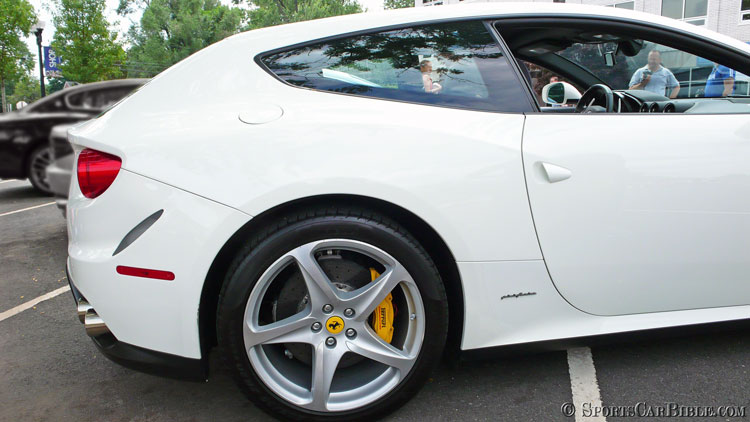 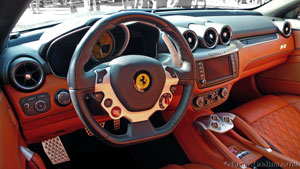 The FF's interior also is a very pleasing place to be in with its wide binnacle housing from left to right a big digital screen (VDA) giving you information on your engine’s status, driver’s aids settings, and other variables like the suspension settings and even brake temperature. At the center is a big rev-counter with its redline marked at 8500 rpm, while its small digital window readout lets you know which gear is in use. 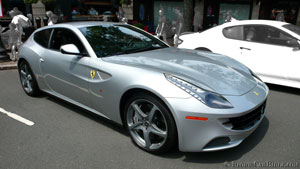 The FF's steering wheel is fitted with shifting paddles, the start button, and as in the 458 Italia it houses everything from the “Manettino”, which allows you to change the FF’s suspension, throttle response and driver’s aids just by dialing on the steering wheel, to the turning signals and wipers control. The navigation screen located on the center console just under three cylindrical interior vents is clear to read and doesn’t have to share its screen time with the speedometer unlike in the 458 Italia. Again under the FF's navigation screen the 458 Italia’s dual-zone climate control unit is a reminder of how far Ferrari has come in terms of standard equipment. 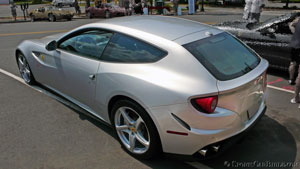 On the dashboard, in front of the passenger, an optional multi-status electronic gauge giving the passenger information on the speed, rev counter, gear used, Manetino setting… seems out of place and just plain geeky gimmicky. As in the “California” or the “Italia” the three buttons for the transmission mode, auto, reverse and launch control are displayed in a triangular pattern on a cast aluminum trim with two handle-grip bars emerging from it. The FF's rear seats are very generous and more useful than the 1992 Ferrari 456 GT. Again to break from the ordinary the FF's rear hatch opens to a decent 450 liter (15.89 cu feet) and can stretch to an eye-popping 800 liter (28.25 cu feet) when the rear seats are folded flat… there goes the Italian neighborhood! 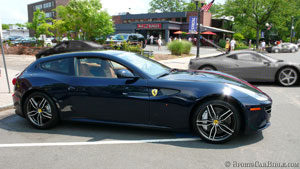 The Ferrari FF has as every 2+2 a V12 engine. This one is front mounted behind the front axle for a better 47%-53% front to rear weight distribution. With its capacity of 6.2 liter (382 cu in) and with direct fuel injection (GDI) it develops 660 ps/651 hp at 8000 rpm through a seven speed dual clutch transmission (DCT) sending the power to the back wheels. At the front though, Ferrari’s first four-wheel drive system (4RM) is said to be half the weight of a standard all wheel drive system unit. The 4RM system has a second transmission taking its power from the front of the engine, with only two forward speeds and reverse. It transmits the FF’s ponies to the front wheels but only up to the fourth gear and up to a maximum 20% of the power delivery. The 1st front transmission gear matches the first and the 2nd gear of the rear transmission, and the 2nd front gear matches the 3rd and 4th rear gear of the 7 speed dual-clutch F1 main rear transmission. 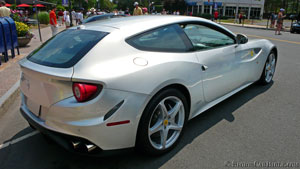 Above the fourth gear (selected via paddles) the FF's front transmission shuts down to only leave the rear wheel drive main unit doing the work. All this four wheel drive technical tour de force, aside from saving weight, was to not have to raise the FF's engine block for a conventional front drive shaft, thus keeping the center of gravity as low as possible. Anyway with this complicated system the Ferrari FF is capable of sprinting to 62 mph in 3.7 seconds, while its top speed is of 208 mph (335 km/h). 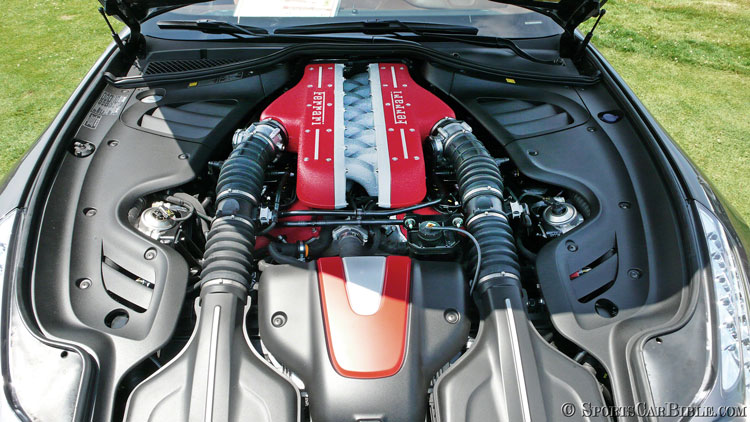 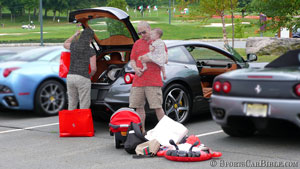 To handle all that power, the FF's Traction Control (F1-trac), Electronic Differential (E-diff), and Electronic Stability Control (ESC) are working wonders with the all wheel drive system, which instantaneously distribute the appropriate amount of torque at each wheel. The FF's adaptive suspensions has the same “Magnetorheological” (SCM3) technology as seen previously but is updated with this third generation on the FF, as well as the second generation standard carbon ceramic brakes (CCM2) needed to stop this all weather beast.

Even with its sports-wagon look, all wheel drive, and maximum cargo space, the Ferrari FF doesn’t seem out of place in this day and age and is a very compelling package making sense for the everyday Ferrari drivers… the “Breadvan” is back!