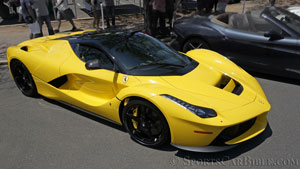 After the 2002-04 Ferrari Enzo Supercar, a new era of more ecologically conscious driven minds combined with new available technologies have made possible for us to have hybrid cars on our roads like the Toyota Prius or the Tesla models to name just a couple. So as the electric trend was slowly gaining momentum on the streets and on race tracks all over the globe Ferrari announced in March 2013 at the Geneva Motor Show the Enzo’s replacement for 2014, their first F1 derived hybrid production car limited to 499 units only, “The” “LaFerrari”. 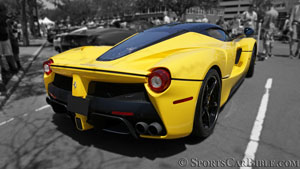 Ferrari’s hybrid HY-KERS system was first seen based on a production Ferrari with the 2010 green metallic 599 GTB HY-KERS concept. But Ferrari’s first Hybrid Supercar starts from a clean sheet of paper and with a fully closed in carbon fiber tub including fixed molded seats as part of the chassis, which is made in house at the Scuderia racing department where F1 cars are built. Four different types of carbon fiber are used to achieve maximum rigidity and lightness while Kevlar is used underneath the carbon fiber tub for its high impact and penetration resistance properties. With the Scuderia Ferrari expertise, Ferrari claims that LaFerrari’s carbon tub is 27 % stiffer, has 22% more beam rigidity while still weighing 20% less than the Enzo’s carbon chassis. At both ends a front and rear sub-frame is added where double wishbone front and multilink rear suspensions are fitted with new and ultra-fast magnetorheological dampers (SCM-E Frs) constantly reacting to the road’s condition. Fitted to the suspension is a set of very thin five spoke wheels with 19 in at the front and 20 in at the rear. 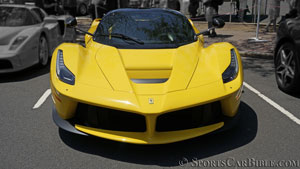 For the first time in Ferrari Supercars history (starting from 288 GTO, F40… ) PininFarina didn’t dress the LaFerrari, but in-house designer Flavio Manzoni from the Ferrari Styling Center is responsible for this compact, voluptuous and predatory animalistic sculpture. For a start Ferrari’s F1 engineer expertise with the KERS system (kinetic Energy Recovery System) has now evolved into a very compact system recovering lost energy when braking that has allowed the design team to achieve miracles in terms of packaging, so much so that LaFerrari’s full carbon fiber body shell is narrower, lower and has a lower center of gravity than the Enzo while having the same wheelbase. At the front two massive air-intakes separated by a thin divider and underlined by a prominent front splitter set the tone. A wide depressed channel almost splits the front hood and includes a radiator/downforce vent. As the current lineup, LaFerrari adopted menacing linear headlights with a stack of LEDs rising up the front fenders. Due to a very compact bubble canopy, the LaFerrari is fitted with very long side mirror brackets making the difference between the canopy and the doorsills where an enormous chiseled air channel, here to cool the engine, seemed to have been carved away from the door. On each side of the rear fenders the engine air-intake can be found while the swopping rear canopy window houses an air-vent at each side of its base. At the back and like the F40, F50 and Enzo a full black-out screen is here for cooling purposes and the single round tail light on each side are semi-enveloped in the body giving the LaFerrari an air of P3/P4, P4/5. Between the tail lights a long automatic and discreet rear spoiler lip slides in and out according to the LaFerrari’s speed and needed grip. Also as other Ferrari Supercars, LaFerrari has ground-effect venturies designed onto its undertray to create downforce. 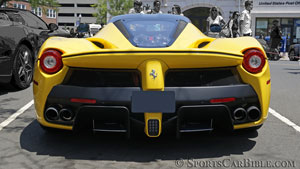 Like the active rear spoiler, two active rear flaps at the end of the accentuated rear-diffuser help to add downforce on the rear axle or reduce drag for ultimate speed. Also underneath the front axle two active flaps work in conjunction with the rest of the active aerodynamic panels, as it also does with the active Guide Vane placed between the two front flaps, which opens or restricts the airflow through the undertray venturies. With this advanced aerodynamic know-how Ferrari claims 360 kg/794 lb of downforce at only 200 km/h /124 mph. 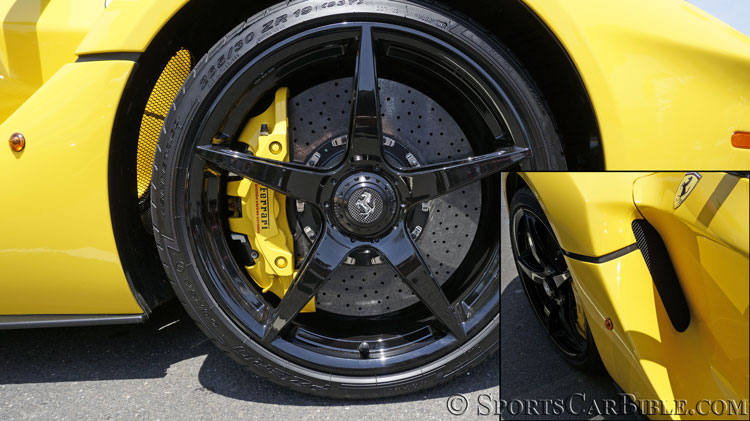 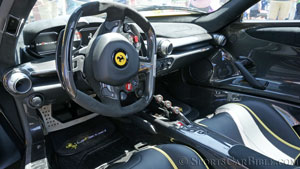 Open the LaFerrari’s scissor/gullwing hinged doors and inside a good amount of carbon fiber can been seen from the door panels, the dashboard to the steering wheel and else but also a good amount of Alcantara (faux-suede) praised for its anti-reflective and grippy properties can be found on the dashboard, steering wheel, tunnel console and seats. Leather can also be ordered on the seats if wanted and can also be seen on the lower dashboard panel. In front of the driver and since the 458, the electric and multi-function steering wheel is flat at the bottom and also at the top and it includes almost every control from the start button, to the wiper switch, turning signal buttons and independent suspension setting button. But as always the Manettino switch is the most mesmerizing here, with Five settings ranging from Wet, Sport and Race where the driver’s aids intervene from “more to less” and the savagery of the throttle response, gear changes and suspension firmness increases as you move from Wet to Race. The two last positions are CT off (Traction Control) and ESC off (Elect. Stability Control). Still right in front of the driver under the binnacle a large 12.3 inch digital screen not only displays all information needed from your current speed to the engine status, but it also has a split personality by offering a second display design layout more suited for track use. The top dashboard is covered in Alcantara with a center section exposing its carbon fiber and where you can find 4 round interior air-vents with an Italian flag placed between the 2 central vents. Leather is used on the lower dashboard section where the heat/AC control unit and dashboard instrument control buttons and knob is. The seats and sitting position are interesting because they are molded onto the carbon chassis thus fixed (steering & box pedal move). Also as mentioned the LaFerrari has a lower center of gravity than the Enzo allowing the seats to be lowered by 3.5cm (1in 3/5th) 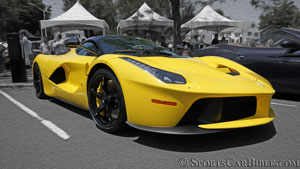 compared to the Enzo making you feel like you are kissing the ground. Also after Ferrari’s decision to have the driver experience a more F1 driving position than before, the LaFerrari has more of a F1 low and reclined sitting position with a high level point to lay your legs and feet than ever experienced on a Ferrari production car. On the tunnel console a carbon fiber “fin/wing” like on the 458 Speciale housed 3 buttons for different transmission modes “Launch/Reverse/Auto”. Further down the console the hazard indicators, window switches and the LaFerrari rising and lowering switch for driveways and other small road bumps are located. 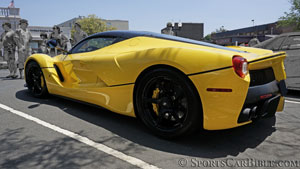 As for LaFerrari’s rear wheel drive hybrid HY-KERS system, it is configured without different driving modes, including the all electric around town mode used on the Porsche 918 or McLaren P1. But instead the HY-KERS system constantly adds more power by filling in low down torque gaps whenever needed alongside the V12 engine for maximum power output while still saving on gas and emission (330g/km of CO2). The electric motor developed by Magneti Marelli is derived from F1 technology with the same torque density and efficiency with 163 ps / 161 hp and 148 ft-lb of very low down torque. To maximize space, the small electric motor is located right behind the gearbox and provides power straight to the gearbox or regenerates the batteries when extra torque is supplied by the engine when cornering for example. But also charging batteries is achieved when braking even during ABS interventions giving the LaFerrari a great pedal feel. The KERS system uses high voltage batteries, which are the equivalent of 40 regular batteries. They are assembled by the Ferrari Scuderia racing department and represent two little battery packs of 60 kg/132 lb only. The batteries are then fitted lower than the V12 between the gas engine and seat bases for better center of gravity and again to maximize space. All this synchronization and synergy between the electric engine and V12 is made possible by a little brain placed on top of the gearbox called Hybrid Power Unit (HPU) also developed by Magneti Marelli for the LaFerrari. 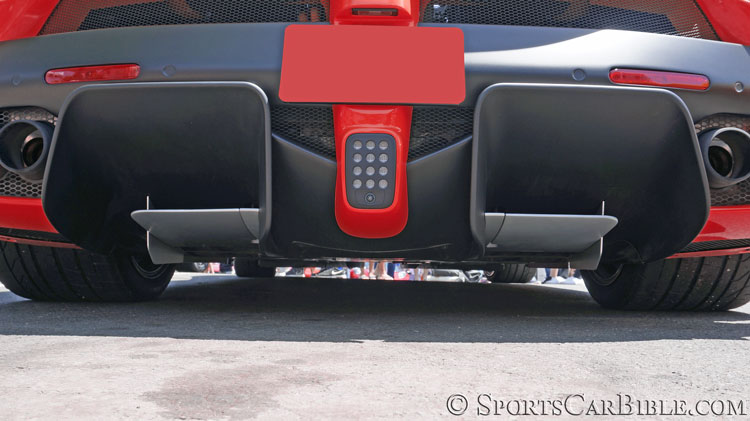 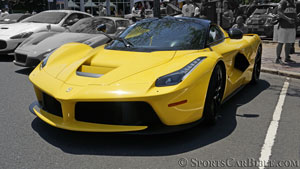 LaFerrari’s dry-sump V12, same as the F12, is longitudinally placed in a mid-rear position, has a 6.3 liter (383 cu in) capacity but produces on the LaFerrari 800 ps/ 789 hp at a sky high 9250 rpm. And with the addition of the KERS System, the LaFerrari ends-up with a grand total and eye popping 963 ps/ 950 hp at 9250 rpm. Due to an electric motor’s nature of being ready to deliver maximum torque and power almost instantaneously, the LaFerrari’s V12 is more tuned for maximum high-revving power output, while the electric motor takes care of the low rpms torque and power delivery with a smooth transition between the two systems. To develop 800 ps/ 789 hp from its V12 instead of the 740 ps/730 hp at 8250 rpm found on the F12, Ferrari uses different F1 techniques such as, the not used anymore, but efficient “continuously variable length inlet ducts” at different engine speeds to improve volumetric efficiency. Low friction coating on the skirts is also used, a light and aerodynamic driveshaft and a high performance Inconel exhaust system used for its lightness and heat resistance properties that makes the LaFerrari’s V12 sing like no other. 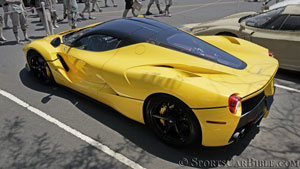 Matted to the V12 is a 7-speed dual clutch F1 gearbox developed by Getrag, which shifts faster than the unit found on the 458 Italia or F12. With this mountain of power the LaFerrari can reach 62 mph /100 km/h in less than 3 seconds, 200 km/h / 124 mph in 7 seconds, and 300 km/h / 186 mph in 15 seconds while the top speed is said to exceed 350 km/h / 217 mph. To stop this monster from its tantrums, Brembo is supplying new carbon ceramic disc brakes of 398 mm at the front and 380 mm at the rear. These brakes are fitted with newly developed calipers designed to facilitate cooling. 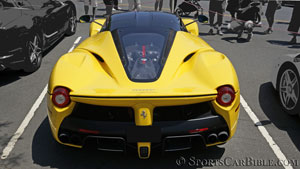 Now to keep LaFerrari on the road, Ferrari uses a plethora of electronic aids to keep this 1.7 million dollar creation in one piece. The traction control and stability control are here to keep the wheels in touch with the pavement and are managed by the Manettino while the electronic differential is of the 3rd generation (E-Diff 3). As far as handling, Ferrari has increased the Pirelli P Zero front tires width from the Enzo and are now 265 mm instead of 245 mm, making the turns in response 30% faster with the combination of the suspensions, stiffer chassis and aerodynamics. Also the LaFerrari lateral acceleration has increased 20% from the Enzo, which is dramatic! With this mega grip and power you might not be too surprised to learn that the LaFerrari is the fastest road-going Ferrari to lap Fiorano (Ferrari’s private track) at 1’20” … 5 full seconds faster than the Enzo’s 1’25” 3!

We believed the Enzo to be the last of the analogue Ferrari Supercars, but with Ferrari’s decision and approach to have an electric motor only to add extra low down oomph to an all out 800 ps/ 789hp V12 is just an added bonus of a total 963 ps/ 950 hp to many. Even better, the choice of adding an electric motor working as an extra boost to the V12 has enabled Ferrari to tune the V12 to a higher and angrier regime, which wouldn’t have been suited for road use if the V12 was used alone. With all this new extra technology loaded on board it is remarkable that the LaFerrari is such a compact first hybrid offer from Ferrari. As for the looks, beauty is in the eye of the beholder and my eyes find that the front-end is menacing and ferocious in a “Megaladonish” way, that the side flanks are ridiculously curvaceous with their immense air-channel on each door, and that the rear looks like a old cult Ferrari sport prototype.

Ferrari LaFerrari -
Brembo is supplying new 398 mm
carbon ceramic disc brakes at
the front and 380 mm at the rear.