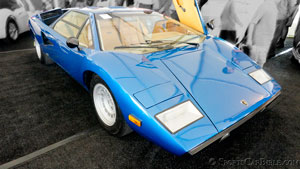 After the impact of the Miura in the exotic sports car world as “the first” real production Supercar, Lamborghini needed a serious replacement for their top sports car model. Keeping Lamborghini’s performance on the front line ahead of Ferrari was the main goal. Once again the talented Marcello Gandini, working then for Bertone, designed the new Bull. Nuccio Bertone was so impressed with Gandini’s work that he shouted “Countach!”, which stands for something like “Holy…!” in the Piedmontese Italian dialect and was then embrassed by Ferrucio Lamborghini. 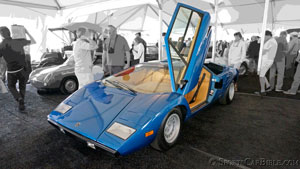 In 1971, the Countach’s prototype, the LP500 (Longitudinal Posterior/rear), or Project 112 was unveiled in Geneva alongside the Miura SV. It also had the same wedge styling flair as the 1970 Lancia Stratos Zero concept car, also drawn by Gandini. By 1973 a more definite production version with the 3.9 liter (240 cu in) dual-cam, V12 found on the Lamborghini 400GTs, Isleros, Miuras and Jaramas was favored from the prototype’s 5 liter (303 cu in) V12 because the latter had overheating problems and blew-up while being tested.

In 1974 the first Countach production model, the LP 400, was ready and produced a “claimed” 375 hp at 8000 rpm with the help of six side-draught Weber carburetors, but 353hp is more realistic due to the side-draught carburetor layout. The chassis was a tubular spaceframe unit with the Miura’s mid-rear mounted V12, but unlike the Miura the Countach’s V12 was placed in a longitudinal position with Lamborghini’s five speed transmission ahead of the V12 to achieve a better weight distribution. The main objective was to keep the Countach on the ground, also unlike the Miura who had a tendency to “take-off” at high speed. None the less, with “375 hp” the LP 400 could sprint to 62 mph in 5.6 seconds and reach a top speed of 174 mph (280 km/h). 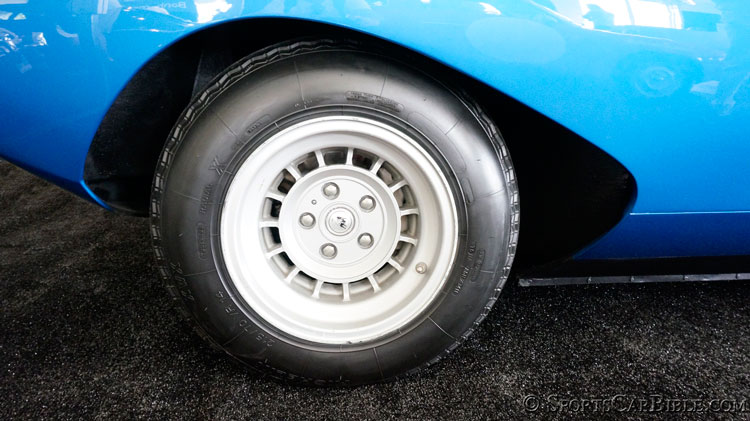 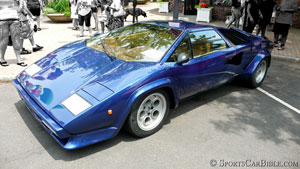 The Countach's angular shape was “Bertonian” at best with every aluminum panel being of a trapezoidal shape, while almost no curves, aside from the top fenders arch, were used. The front-end had pop-up headlights including two round lamps on each side. 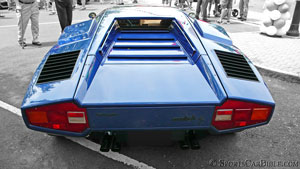 Below them the turning signals and parking lamps were housed in a matching rectangular covered element and looked futuristic at best. The Countach's side windows adopted a Rally styled horizontal divider while the massive NACA air intake starting from the door and ending on the rear fenders for cooling purposes was not found on the prototype. Also new was a “letter box” shaped air scoop sitting at the top of each rear fender, also here for cooling purposes. 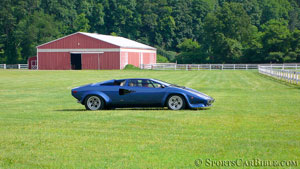 These air scoops were placed just in front of impossible to see through, caved-in rear quarter windows. The back was as spectacular as the front with low angled and long rear buttresses fitted with air vents and ending with very futuristic trapezoidal tail lights, which fit harmoniously with the general design. The rear valance was raised up to show off the Countach’s quad-exhaust pipe tips, and the rear fender arches were chiseled and raised like eyebrows giving the Countach a better stance and meaner look… as if it needed it. 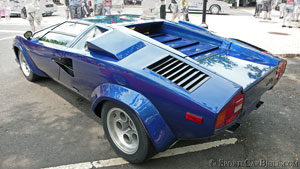 But the main attraction was the very theatrical scissor doors, actually needed to enter this wide doorsills Supercar, and is now part of Lamborghini’s heritage. While being a great eye catcher and rock ‘n roll royalty Supercar, the Countach was the most impractical Supercar ever built. Driving one commanded you to have muscles to work the clutch, gearbox and steering wheel. Parking was a circus act all together, and required you to open the door while sitting on the doorsill to have any sense of where you were backing up. 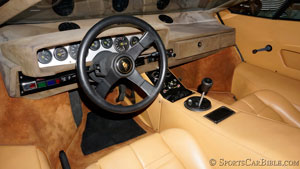 Inside the Countach's space age layout dashboard found on the LP 500 Prototype was lost and a more grounded and wide rectangular binnacle housing seven dials was used. Between the seats, the tunnel console adorned the heat controls, vents and gear lever with its exposed metal gate. The “banana” seats looked inviting but once seated, the reclined position and the absence of rear visibility made things a little scary for the non-initiated, but as long as you were going forward you were just fine!? To help facilitate rear visibility the LP 400 was fitted with an unconventional opening on the roof allowing the driver to see through this design element, which gave the Countach LP 400 its unofficial name, the Countach “Periscopo”. 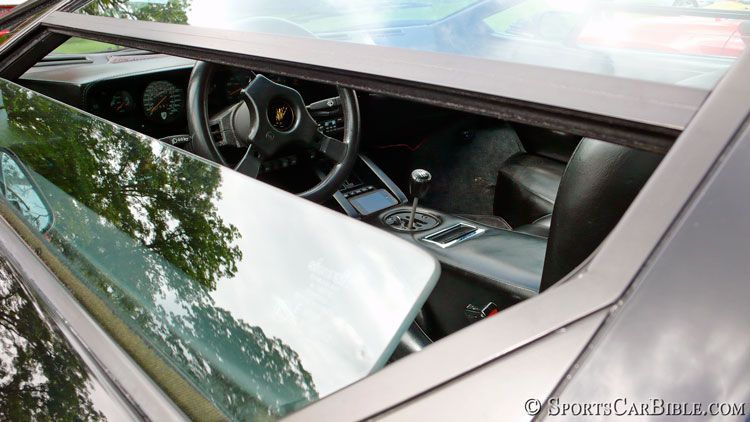 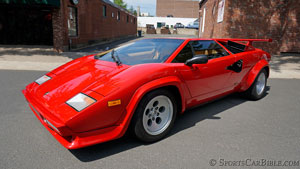 1978 saw the arrival of the Countach LP 400 S. The LP 400 S received a large shot of steroids and grew muscles exponentially from the original Countach's clean and pure lines. But somehow this display of muscles didnt look cheap on this exotic and harmoniously allowed the Countach to express the raw monster that it truly is. The idea behind this new mad hooligan look came about when Austrian born and now Canadian oil magnet and Formula 1 racing team owner, Walter Wolf ordered a custom Countach LP 400 with a 5 liter V12 engine. The Walter Wolf car had extended flared wheel arches, and a monstrous rear wing distinguishing his Countach from the rest of the “mortal” Countachs. 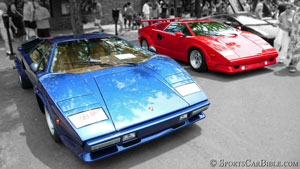 Also for the first time seen on a Lamborghini, a set of five-hole wheels, which would become Lamborghini’s trademark up until the first Mucielago made its debut. Huge wheel arches did make the Countach a very muscular car indeed, even if it lost the purity of its original lines. However the 80’s were coming and nothing could stop the ego-driven decade and the new and largest tires on the planet, the Pirelli P7 with 345 mm at the back fitted on the new five-hole Campagnolo “Bravo” wheels. With the adoption of these proper sports car rubbers, the suspensions were revised to fit the wider wheels.

At the front, a lower spoiler was now body color-coded and at the back the huge rear “V” wing found on Wallace’s car became optional and almost a must have option. This extravagant piece of aerodynamic design didn’t really help with the rear downforce at high speed and was mainly here to match the fiberglass wheel arch extensions and flamboyant or insecure customer’s personality as well as reducing the top speed by 25 kmh/h (15-16 mph) due to the added drag. Inside, the gas pedal became hinged, and the handbrake was now fitted on the right side of the drivers seat.

In 1979 the Countach LP 400 S Series II adorned new wheels with five holes flush to the wheel disc, side mirrors, Jaeger dials, and little side fins at each extremity of the massive rear wing. 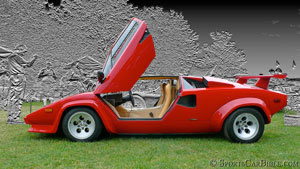 Arriving in 1981, the Countach LP 400 S Series III was introduced. From now on referred to as “High Body” the Series III received a modified chassis with a bigger interior space. For this to happen the roofline was raised by 1.18 in (30 mm) and also the suspension setting was raised. For tractability purposes the power was “lowered” to 353 hp at 7500 rpm, while 325 hp was the power developed by Federal Countachs. With this and an increasing weight of 298 lb (135 kg) the LP 400 SIII performances were on the downside with 5.7 seconds to get to 62 mph, and the top speed was now 167 mph (269 km/h) with the “look at me” rear delta wing.

To keep up and exceed Ferrari’s first mid-rear engine Supercar, the Berlinetta Boxer (1976-84), the Lamborghini Countach became the LP 500 S (or LP 5000 S) in 1982. Although not a 5 liter but a 4.8 liter (290 cu in) V12, this one restored the power to 375 hp with a lower compression ratio at a more civilized 7000 rpm. Consequently the torque figure also went from 266 ft lb at 5500 rpm to 302 ft lb at a much lower 4500 rpm, thus increasing reliability, especially since an electronic ignition was fitted, which was what Alfieri Guilio, the ex-chief engineer from Maserati, now working for Lamborghini since 1973 was looking for. On the outside, 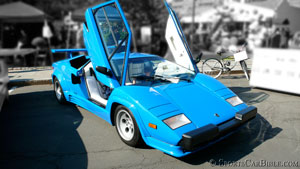 the famous rear wing became standard and the five-hole Campagnolo wheel set was now supplied by OZ Racing. With a constant rising weight of now 3285 lb (1490 kg), performance seemed equivalent to the LP 400 series with 5.6 seconds to launch our Bull to 62 mph from a standstill, while the 173 mph (278 km/h) top speed was also in the same order as the LP 400. Sadly later on in the USA the tail lights were now replaced by rectangular units encased in a crash crumpled zone panel. But as mentioned the Countach 500 S was altogether a Countach capable of cruising or dealing with town traffic as long as you had arms and legs of steel to deal with the controls. 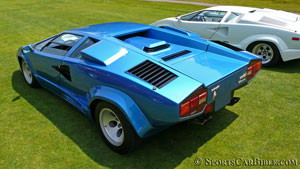 In 1984 Ferrari came out with the sculpturesque Testarossa, and to stay dominant in terms of sheer power output, the Countach would have to grow. This growth came in 1985 with the Countach 5000 QV. The 5000 QV had a bigger engine, this time of 5.2 L (315 cu in) and 4 valves per cylinder giving it its nomenclature (Quattro Valvole). 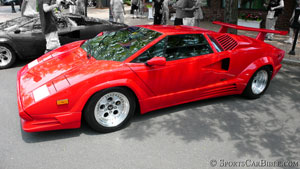 Suddenly this new Countach equipped with new heads and downdraught Weber carburetors now produced a strong 455 bhp at 7000 rpm, rumored to be 475-480hp by Valentino Balboni. This made the Lamborghini Countach 5000 QV stand out from the 390 hp found on the first Testarrosa and gave the 5000 QV a 4.9 seconds time to get to 62 mph and the title of the fastest car in the world with a top speed of 182 mph (293 km/h). In the USA the Weber carburetors were replaced by a Bosh K Jetronic injection system reducing the power to 420 hp, 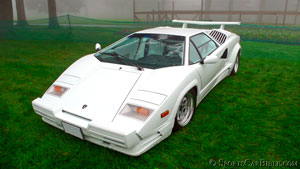 but this move was essential if Lamborghini wanted to stay on US soil. The most noticeable design change from the European carburated 5000 QV came from the higher rear engine lid now making any rear visibility impossible due to the down-draught carburetor layout, but not in the USA where injection allowed for a unique and lower engine lid design. Sadly though in the US unflattering small rear rubber bumpers were fitted under the redesigned rear panel.

Inside, the center console was slightly reworked as well as the glove box.

In 1987 the Lamborghini five speed transmission was replaced by a five speed ZF unit, and in 1988 ½ the rear side skirt adorned two horizontal slats, central locking, and a better heat/vent system. 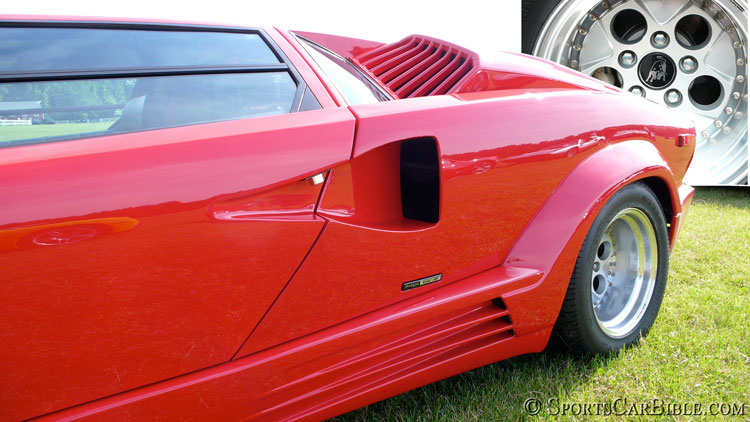 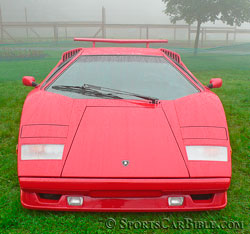 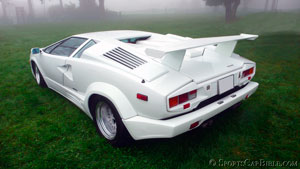 A two piece forged OZ Racing wheel set looked the part, and an improved AC was welcome, as well as electric windows, and electric seats. The power remained at 455 hp in Europe with the use of six Weber carburetors, while the US cars were still fed by electronic injection and produced 420 hp. Performances were in the same order as the 5000 QV with 183 mph (295 km/h) top speed and a 0-62 mph time of 4.8 seconds. 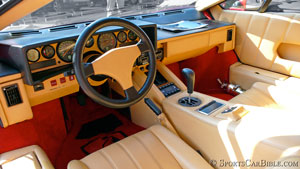 These evolutions kept the Lamborghini Countach afloat for 16 years and covered the bedroom walls of many young boys as the most outrageous, impractical and furious exotic car on the planet, concluding over a decade and a half of dramatic “UFO like” Supercar status. While five evolutions of the Countach were built during its production life, many regard the first series 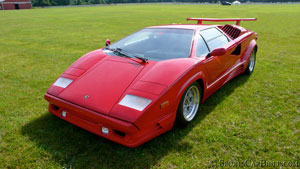