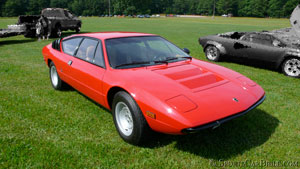 In the late 60’s the Porsche 911 and Dino/Ferrari 206/246’s commercial success convinced Ferruccio Lamborghini that he needed a “small bull” to cover the entire luxury sports car market, and make a profit to recover from the Islero’s commercial nightmare. 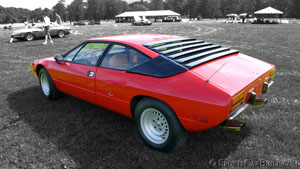 He needed a sports car with space and pace to compete with Ferrari and Porsche, so he asked Paolo Stanzani, his new head engineer, after Dallara’s departure, to conceive a mid-rear engine 2+2 sports car. The Lamborghini Urraco P250 (P for Posteriore/Rear) was presented in 1970 at the Turin Motor Show, in reference to the famous Spanish bullfighting breed. 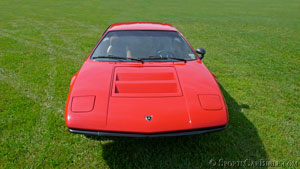 With poor marketing the Urraco was presented without much development and after Ferrucio Lamborghini sold 51% of his financially struggling company to a Swiss investor, which dragged the Urraco project a little more, the Urraco was finally ready for production in 1973. With this poor strategic launch, most of the enthusiasm and orders received in 1970 were canceled, giving the 1000 Urracos per year sale target an optimistic stretch.

The Urraco's design was once again handed to Marcello Gandini who penned the Miura in 1966 and was then working for Bertone. Gandini designed another geometrical design “a la Bertone” where the front-end was on the flat side, and fitted with pop-up headlights. Two huge slats on the front lid extracted hot air from the front radiator as well as creating down force on the front axle. The Urraco's thin front chrome bumper didn’t take away from the front view, and for a 2+2, the length didn’t seem “too long” like in the 1973 Dino 308 GT4, which was also a Gandini design taken from one of the Urraco’s prototype. 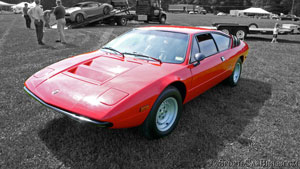 The reason for the Urraco’s better balance came from the use of three diagonal louvered air scoops feeding fresh air into the engine bay, and distracting you from the extra length that a 2+2 with a rear engine configuration demanded. The rear side louvers wrapped around the rear and joined the six rear window slats, which were an important visual cue taken from the Miura. The truncated rear panel was fitted with a thin split chrome bumper, while just above them the tail lights were the same as the Urraco’s older brother, the 1970 Jarama. 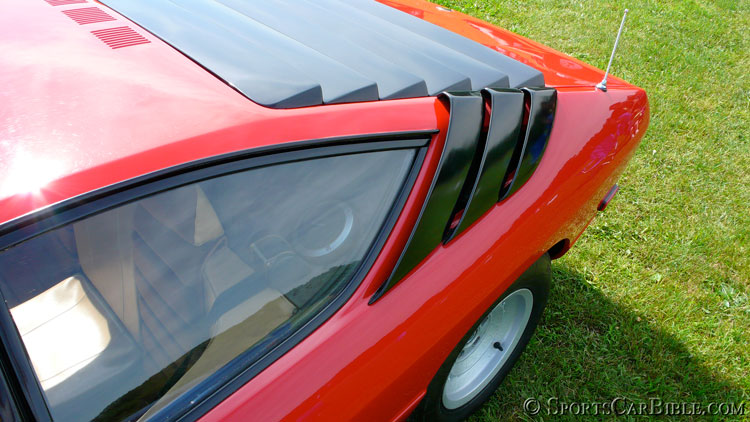 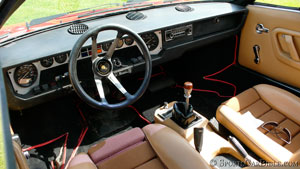 Inside, a visually interesting dashboard ended up being a driving nightmare with six small gauges including the clock at the center. The speedometer and rev-counter were placed opposite of each other on separate enveloping wings, making it quite dangerous to just read your revs or speed when busy at the wheel. A tiny center console received a radio and two big round air vents, and at the back the two rear vertical seats were exclusively for kids. 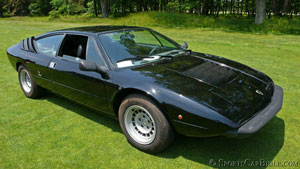 To compete with the Dinos and 911s, Lamborghini had to drop their V12 in favor of a new and smaller 2.5 liter (150 cu in) V8, which was placed on a rear subframe, as well as the MacPherson suspensions also found at the front to maximize space. This single cam per bank V8 with the combustion chambers lodged in the piston was driven by a rubber tooth belt, 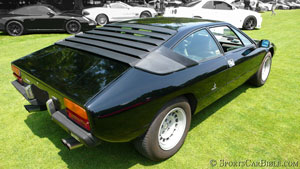 and fed by four twin-choke Weber carburetors producing a respectable 220 hp at 7500 rpm. It was mated to a five speed dog-leg (1st bottom left) transmission driving the rear wheels. Like the Miura, the V8 was placed transversally for a compact package, and was able to get to a top speed of 143 mph (230 km/h). It also could launch the Urraco to 60 mph in 6.6 seconds, which was on par with the competition. 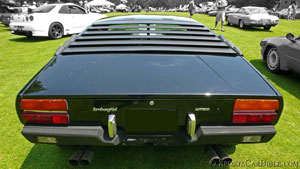 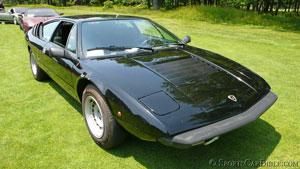 Also revealed in 1974 at the same time as the P300, the Urraco P200 was introduced to the Italian public. The Urraco P200 was developed to counteract the high tax bracket imposed in Italy by cars over 2 liter (122 cu in) capacity. But with 182 hp only 66 Urraco P200 were ever built. 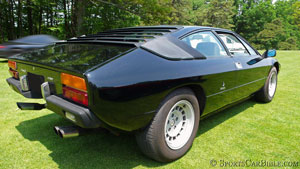 The all important US market with its large bumper car and its increasingly anti-pollution regulations didn’t help the Urraco’s cause either and with only 180 hp available from the 2.5 liter (150 cu in) V8, the 1974-76 Urraco P111, as named for the US market, didn’t appeal to US buyers where only 21 where sold. 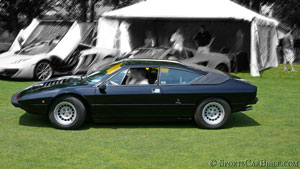 Ironically the Lamborghini Urraco who was supposed to bring prosperity to Lamborghini but left the company in a worse financial position, and never reached its 1000 per year production car target as mentioned. About only a quarter of that were annually built, with a total of 791 Urracos produced until 1979. Again, as the Jarama and Islero, quality and reliability were problematic on the first models, which explain the lack of buyers at first, and while the P300 was a well developed sports car, the damage was already done. This is without mentioning the first oil crisis of the early 70’s, and the more than late start of production that gave customers cold feet killing the Urraco’s initial momentum!

Lamborghini Urraco P111 -
The rear seats are only here for
small children and cargo space.

Lamborghini Urraco P111 -
On the Urraco P300 five smaller slats
replaced the 2 found on the P250.

Lamborghini Urraco P250 -
The side air-intake slats were
"Bertonian" all the way and match
the Miura style rear window slats.