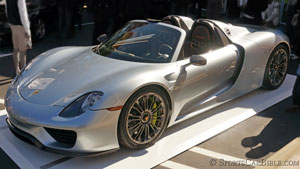 After the production of the legendary Carrera GT which ended in May 2006, Porsche was ready to unveil its next Hypercar, the 2013 Hybrid Porsche 918 Spyder. The 918 Spyder had been shown as a concept in Geneva in 2010 and had a rather public development due to Porsche wanting to showcase and promote its new Hybrid technology. The Hybrid concept for a Super/Hypercar was new and only 3 car manufacturers were ready to show-off their avant-gardist know-how, which included Ferrari with LaFerrari, and McLaren with their P1. 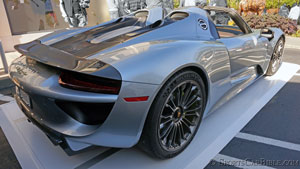 The In-house body design is all made in Carbon Fiber Reinforced Plastic (CFRP) and is very reminiscent of the Carrera GT. Its well proportioned and symmetrical looks, which include a 2 panel Targa roof top also made from CFRP that can be lodged in the 110 Liter / 3.9 cu ft. front compartment. Also as the Carrera GT the chassis tub is made from carbon fiber, but this time reinforced with plastic (CFRP), which also includes its main rear subframe supporting the power plant. 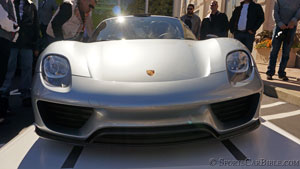 Now unlike the Carrera GT, the 918 Spyder doesn’t have pushrod suspensions, but a more conventional setup with Porsche Active Suspension Management (PASM) all around. At the front a double wishbone setup with an optional front lift for bumps and driveways can be fitted for $10k. At the back a multi-link unit has been engineered where a less conventional rear steering system is also fitted. The rear wheels steer up to 3 degrees in the opposite direction at low speed for greater agility, but then at high speed they turn the same direction as the front wheels for better high-speed stability as found on the 991 GT3.

As mentioned, the Porsche 918 Spyder is a hybrid Supercar allowing its dual technology to return up to 78 mpg (US) and a CO2 emission of 79 g/km (127 g/miles). This is not only possible with the use of its 2 electric motors, but also its specially developed Michelin tires with their high level grip and their low rolling resistance which includes tire pressure monitoring (TPMS). As said previously 2 electric motors are used, one on the front axle producing 125 hp making the 918 Spyder an all wheel drive Supercar up to 225 km/h / 146 mph where the front motor decouples itself to render the 918 as a rear wheel drive monster only. The second engine producing 154 hp is located at the back and helps the V8 combustion engine to fill in low-end torque gaps or 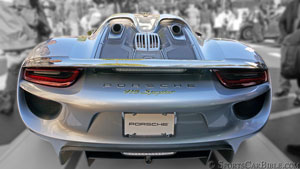 simply run on its own without the V8 engine, as the front motor does. The battery can be regenerated by simply plugging it in your garage and takes 4 hours to do so in most of Europe where 220-240v is available or in 25 min with the optional “Porsche Speed Charging System”. As well as recharging itself via a plug outlet, the 918 Spyder liquid cooled Lithium-ion battery pack formed of 312 individual cells, can also regenerate itself up to 80% in 10 min while driving when the regenerative brakes are applied or when your foot releases the throttle. 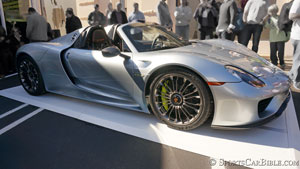 Also the 918 is fitted with carbon ceramic brakes (PCCB) with 6 piston calipers at the front and 4 at the rear providing one of the best stopping powers recorded by any sports car. As for the all aluminium dry-sump V8 combustion engine, it is a “streetable” version of the famed LMP2 Spyder RS racer weighing only 135 kg / 298 lb, which can be compared to the weight of a standard 4 cylinder unit. It has direct fuel injection (DFI), dual-cam with 4 valves/cylinders and no chains, no belts or pulleys, but a flat plane crankshaft is fitted. With a capacity of 4.6 liter (280 cu in) it produces 608 ps at 8500 rpm with a redline of 9150 rpm 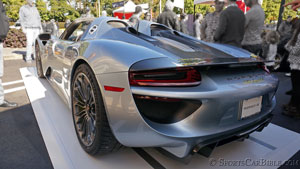 making it the highest specific naturally aspirated engine for the street that Porsche ever created with 132 ponies/liter. The V8 engine is matted to a 7-speed dual clutch transmission (PDK) at the back and as the rear electric motor it only transfers power to the rear wheels. Managing the V8 engine and 2 electric motors on the 918 Spyder is Porsche Torque Vectoring (PTV) and the Electric Porsche Traction Management (ePTM), which allows for seamless management of all the systems for the driver depending on the driving mode that he/she chose. 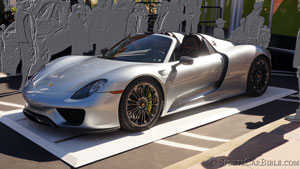 The driving mode is accessed inside by a button on the steering wheel and is setup with 5 driving modes. The first mode “E-Power” allows the 918 to function in electric mode only, which is not good for the 18 miles / 29 km that Porsche has initially claimed, but a still very honorable 12 miles / 19 km range. Then the “Hybrid” mode, where by driving like a Prius owner you could get up to 78 mpg (US). This mode works with the V8 engine, but allows the electric motors to shut off the V8 when coasting for maximum efficiency. Next is the “Sport Hybrid” mode where the V8 petrol engine is always on with the electric motors here to give you the low-end torque boost needed for a spirited drive. The forth mode is the “Race Hybrid” mode, which mainly is a revved up “Sports Hybrid” mode with higher and faster shifting points. Finally the “Hot Lap” mode where all the energy from the battery pack is used on the electric motors without reserves for maximum power output and thus for a combined grand total of 887 horses! 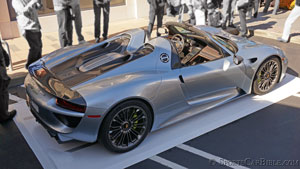 With these numbers the Porsche 918 Spyder is able to rocket itself from 0-60 in 2.5 seconds but “Car & Driver” was able to register a blistering 2.2 second time. While the 214 mph / 345 km/h top speed is nothing to be ashamed about, the 918 Spyder recorded a much more impressive 6’57” lap time around the Nurburgring, making the 918 the fastest road car to ever do so by making a sub 7 min lap time! To manage all that speed the 918 Spyder is fitted with 3 “Porsche Active Aerodynamic” (PAA) stages managing the aero around the car. 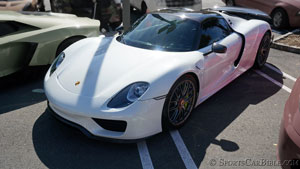 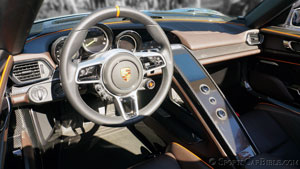 Inside the 918 Spyder fit, finish and build quality is of the highest German standard with a multi-button electric steering wheel, which unveils 3 detached pod dials and an infotainment screen just above the center console. The swooping center console reminiscent of the one found on the Carrera GT also has a screen and multiple function buttons and dials laid out on a sleek black panel display as part of the “Porsche Communication Management” (PCM). A high end stereo system with 11 speakers made by Burmester makes your trip that much more conventional as you will also 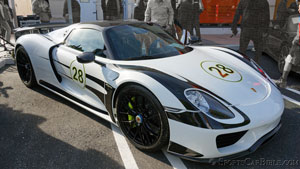 find electric seats and a glove box for everyday uses if you wish to do so. The dash screen also can be switched to rear view making it act like a rear view mirror. Speaking of rear mirror, when the Targa roof is off a little wing can be placed just above it on top of the windshield frame. This not only reduces wind noise, but it also prevents the exhaust gas coming from the beautiful top pipes from entering into the cockpit. These glorious top pipes just rise above the occupant’s head and far from the battery pack to protect the battery from over-heating. 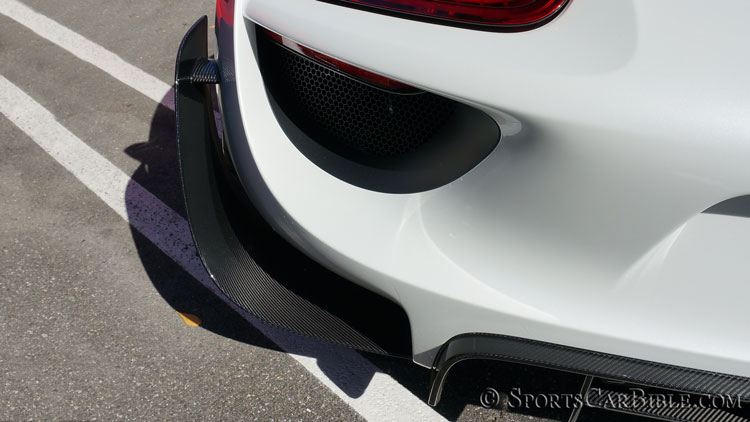 If you didn’t want to order the optional “Liquid Metal Silver” or “Liquid Metal Chrome Blue” paint at $63.000 (not a typo) you might want to throw your money ($84,000) on the “Weissach Pack”. The Weissach Pack reduces the overall weight by 77 lb / 35kg by mainly equipping the 918 Spyder with a set of Magnesium wheels (-30 lb / -13.6 kg) for better unsprung weight and braking power. The Weissach Pack also deletes the radio and AC, which can be refitted at the factory anyway. 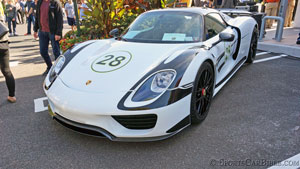 It also deletes the leather seats for a lighter set of cloth seats and a set of 6 point harness seat belts for your discomfort. Carbon fiber accents can be found inside and on the outside as well. On the outside, aero pieces, which look like side carbon stone guards behind the rear wheel arches are exquisite as well as the specific paint and racing motifs if it is what you are into. Finally, the Weissach Pack can be identified by the exposed carbon fiber Targa top roof and side mirrors. 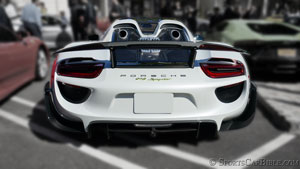 The Porsche 918 Spyder is not only a Hybrid Super/Hypercar with added electric motors to add some oomph, but it is a fully thought out and well developed concept. It houses a full array of technology with its all wheel drive and four wheel steering including an all electric mode and smart regenerative system all contributing to a clever package giving a sense of what a Hybrid Supercar intended for a new sports car era should be… the 959 spirit is alive and well.