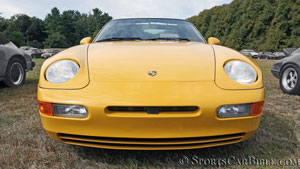 Porsche's last evolution of the water-cooled 4-cylinder, front engine rear transaxle, appeared in August 1991. This last rear wheel drive model was named the Porsche 968, but should have been named the 944 S3 instead. Porsche once more needed an entry-level sports car, but went through the 944’s profit fund and mainly had to reskin the 944 S2. 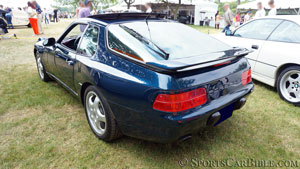 Porsche went on to restyled the nose making it resemble the one found on a 928 and changed the rear lights into a red unit flushed with a rear wing also seen towards the end of the 944’s life. To accommodate the new headlight set, the front fenders were reworked, but they still were beautifully flared as well as the rear fenders. The side mirrors also were changed from a rectangular design to a more teardrop and aerodynamic shape as seen on the 911s of the time (964, Aug 91). 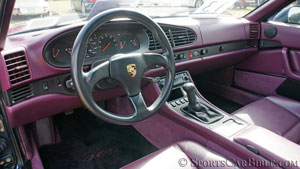 The interior was exactly the same as a 1985.5 Porsche 944 and its "Oval" dashboard layout, this again allowed Porsche to develop and produce the 968 at a lower cost. The rear seats were just here for children but the backrest could be lowered to transform the rear seats into a practical parcel shelf, while the rear window acted as a hatch for easy rear access. Also from the start the 968 Cabriolet produced by the American company ASC in Germany was available, and as the 944 S2 Cabriolet it had a flat trunk lid and beautiful small soft-top giving the 968 Cabriolet a fantastic speedster look with its lowered windshield of 2.6 inches / 6 cm. 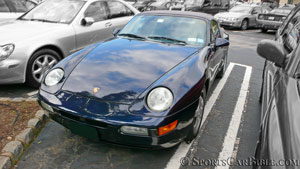 system allowing more low and mid-end torque. The transmissions were also new with a 6-speed manual offered as standard, and an optional automatic 4-speed "Tiptronic" transmission taken from the 911 (964) where you also could manually change gear via the gear lever. 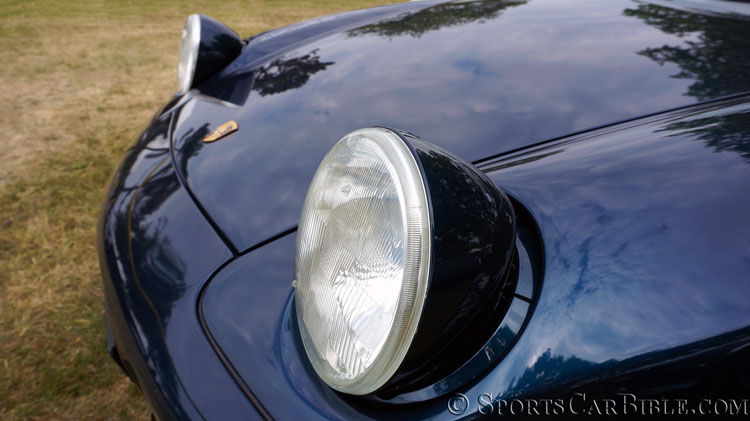 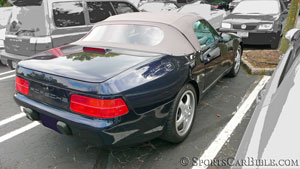 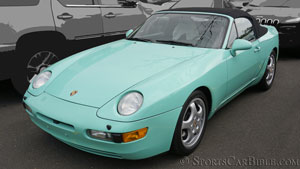 out with its almost perfect weight distribution that you felt a little removed from the driving experience, and customers still saw a 944 through the expensive price tag of the 968. To make things even worse, BMW introduced its new 6 cylinder E36 M3 in 1992, this second generation M3 had 286 ps in European trim and 240 hp in US with seating for four adults, a large trunk and all this for less money than the 968. 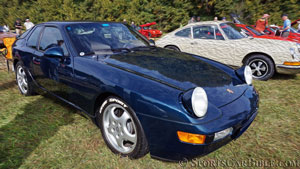 Times looked grim for Porsche so they went on to build a lightweight model like the 911 RS. The 1993 Porsche 968 CS for "Club Sport" was unveiled, this model was 110 lb / 50 Kg lighter. To reduce the 968’s weight, Porsche engineers removed all the 968 standard amenities, included the rear window wiper, sound deadening and the two small rear seats, while replacing the front seats by light, non electric Recaro bucket seats with matching color coded rear seat frames. The suspension was firmer and lower with bigger anti-roll bars, while the body color matched wheels were available with the Sport Package on the “standard” car. The Porsche 968 CS performed better, with a 6.3 seconds time to 60 mph and a new top speed of 160 mph / 257 Km/h. 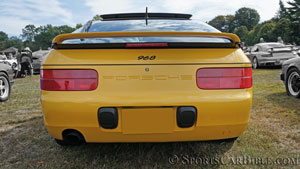 Aside from not being as practical as the Standard 968, and having a limited choice of five flashy colors also adorning the wheels and rear wing, the Porsche 968 CS made you look like a street racer a bit, especially with its enormous and tacky “Club Sport” script all along the fenders and doors. 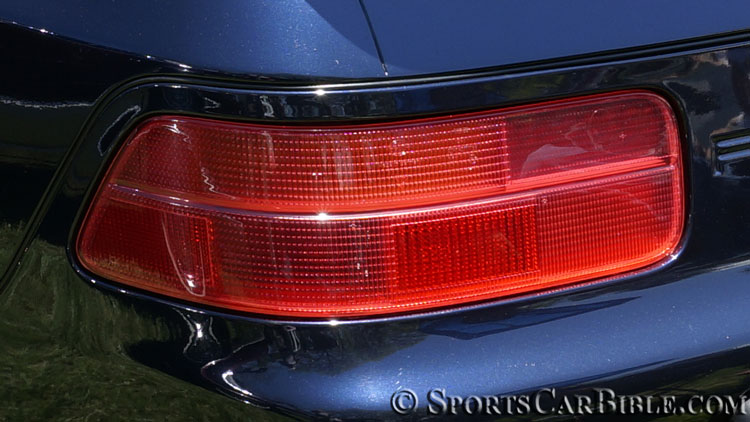 Sadly the 968 Club Sport with all of its track praise didn’t sell. A last effort to revive the 968’s image was the production, also in 1993, of the Porsche 968 Turbo S exclusively for the European market. Only 15 Porsche 968 Turbo S were produced, nothing abnormal when knowing that the little inline-4 Porsche as expensive as a 911 Turbo. The Turbo S had a lower front spoiler, two NACA air intakes on the hood, an adjustable rear wing and a superb 2-wheel piece set. 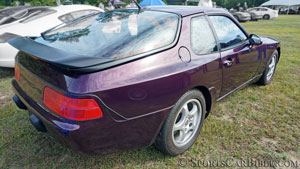 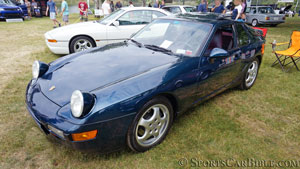 Today the Porsche 968 has its place amongst collectors who want the ultimate evolution of Porsche's water-cooled front-engine inline-4 models. As of 1996 Porsche haven't replaced the 968, which left Porsche's catalogue for another cult entry level sports car, the Porsche Boxster.

Porsche 968 -
As seen on the 1990 Porsche 944, the
rear wing replaced the previously seen big
wrap around spoiler, which matched the
refreshed front-end design on the 968.
Porsche 968 Cabriolet -
The soft-top made by American company
ASC was the same as the 944 S2 Cabriolet
with its small rounded design. This made
the 968 Cabriolet look more like a
Speedster than a Cabriolet, which was
also achieved by its lowered windshield
of 2.6 inches / 6 cm..
Porsche 968 -
Luckily the huge electrically tilting
sunroof was kept on the 968 and as its
predecessor, it could be stored in the trunk.
Porsche 968 -
Also part of the 968 refreshed looks, the big 924/944's
rectangular side mirrors were replaced by these
more modern and sporty teardrop shaped mirrors.
Porsche 968 -
The 924 and 944 style tail lights have
been redesigned for the 90's and were all
finished in red and flush to the rear panel.
Porsche 968 -
The 17in "Cup Design" wheels came with the optional
"Sport Package". They offered a rougher ride quality,
but gave more grip and looked much better than
the standard wheels with their wider diameter and
beefier spokes. Also in 1994, the Porsche 993 style
wheels (Cup Design 93) were available.
Porsche 968 -
The standard 16in, 5-spoke wheels looked
a little small and "weak" on the 968.
Porsche 968 -
The massive 3 liter / 182 cu in. inline-4 was
taken from the 944 S2 but with the addition of
the "Variocam" (Variable valve timing) the
power rose from 211ps/208hp to 240ps/237hp.
Porsche 968 -
Here in "off" position the pod headlights
retract back to stay flush against the fenders.
Porsche 968 -
The 944's pop-up headlights were
changed into a more "928" pod design.