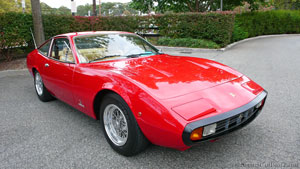 This next Ferrari is a bit of an oddity, not only from its looks, even if beauty is in the eye of the blind beholder, but also for its ranking in Ferrari’s lineup. Ferrari felt that a model was missing between the largely acclaimed Ferrari 365 GTB/4 (Daytona), and the existing four seater 365 GT 2+2. So Ferrari introduced the 365 GTC/4 in 1971. 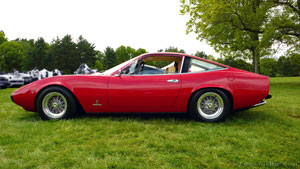 have a 2+2 long distance cruiser that also doubled as a sports car. To achieve this the chassis was made shorter than the one found on the long 365 GT 2+2 and at 2500 mm (98.4 in) it only was 10 cm (4 in) longer than the Daytona. Like the Daytona, the 365 GTC/4 had ventilated discs all around as well as independent suspension with the only difference of having self leveling rear dampers, developed by Koni, allowing the ride to stay at the same height with or without a maximum load capacity, as seen on the 365 GT 2+2. 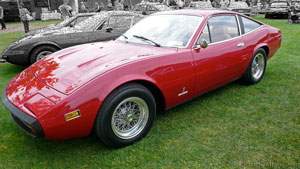 Now for the controversial part, the design… PininFarina designed and built the 365 GTC/4. The overall shape was angular, aside from the roofline, and was a definite departure from PininFarina’s usual flowing and elegant lines.

The front adorned an awkward black rubber nose acting as a bumper and enveloped the turning signals and parking lights. Above the rubber nose were retractable dual round headlights on each side, 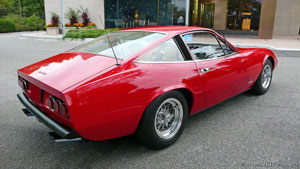 with a curved low hood line made possible by the use of side-draft carburetors instead of downdraught units usually found. Two air vents were located on the hood and the generous three quarter rear windows ended in a not so eye pleasing sharp point. The rear also was controversial with a flat fastback design and the truncated recessed Kamm-tail had a black matt finish. At the back though, an odd three round taillight layout mimicked the ones found on the 365 GT 2+2 and 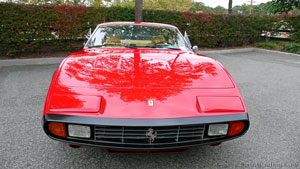 could have been the most significant faux-pas on the GTC/4. Unlike the bulky front rubber bumper, the rear metal bumper, also finished in matt black, was thin. The five star shaped alloy wheel set had a center knock-off hub, but Borrani wire wheels were still available as an option. The only visual differences between European and Federal models, or “Il Gobbone” (The Humpback) as the Italians say, was done by the adoption of incased front and rear rectangular side light markers for the US models. In Europe, the auxiliary small round turning side signals were fitted on the front side fenders. 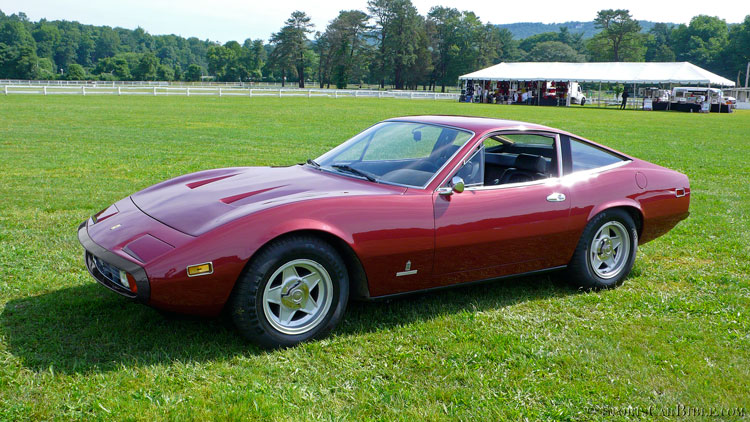 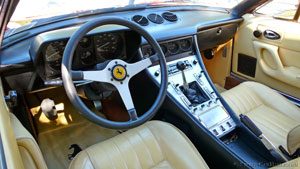 Inside, a little plastic revolution happened, with a modern interior including a wide and very swooping center console. At the top of the console, four gauges were oriented towards the driver, and the radio was installed just below with the standard AC controls on each side. A plethora of lever and rocker switches were scattered around the five-speed non-exposed metal gate gear lever, with the traditional metallic ashtray underneath it. The binnacle also looked contemporary with four rounded central air vents on top of the dashboard, but it is the rear seats that were out of place here with their extremely small size; thankfully the backrest could be lowered flat giving more luggage space. 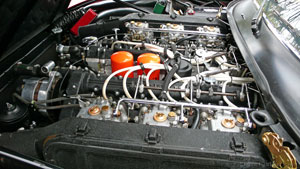 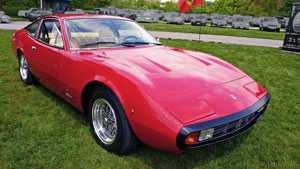 So be it, the 365 GTC/4 didn’t receive the best from PininFarina (tired from the Dino program maybe) but it made up with its ride quality. Not as rewarding to drive as the Daytona, the 365 GTC/4 effortlessly steered with its assisted steering box, and cruised and stopped without demanding its driver to be a bodybuilder. Now because of its "not so desirable looks", it can be bought for “little” money, which is good news for the enthusiasts when you know that it was more expensive new than the beloved Daytona sold at the same time.