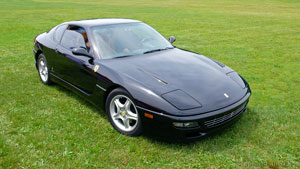 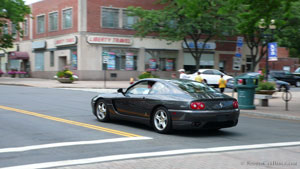 Not available in the US until 1994, the 456 GT was without a doubt one of the most elegant cars available then, and was a total departure from the way Ferrari conceived and built cars. This time Ferraris’ engineers created the 456 GT not only with their hearts, but also with their heads as they did with the Ferrari 330/365 GTC back in 1966-70. This gave the 456 GT an aptitude for every day driving, ergonomics, reliability and build quality previously lacking at Ferrari. Many said that the 456 GT was a return to Ferrari’s front engine layout, but every true 2+2 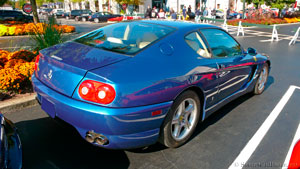 Ferrari built so far, aside from the smaller Mondial & 308 GT4 were front engine, rear wheel drive. In the 456’s case though, a rear transaxle transmission was fitted for better weight distribution. The steel tubular space frame chassis adorned four independent suspensions with a two setting damping program going from “Normal” to “Sport”. Like the 365 GT4/400/412i series, it also had a self-leveling rear suspension adjusting itself depending on the speed and onboard load.

Pininfarina designed the 456 GT, and found himself reminiscing about the 1968 Ferrari Daytona… who would complain? The 456 had aluminum panels bonded to a space frame chassis with a front bumper housing the turning signals/parking lights, the “smiley” egg-crate grill, and two lower air intakes. On the hood were two rectangular pop-up headlights with a chiseled air vent fitted just behind them, taking a visual cue from the 308 GTB/GTS. To cool the ABS equipped front disc brakes, an opening and panel depression starting at the back of the front fender by the door hinges, allowed the disc’s hot air to escape. The frameless side windows automatically sealed themselves against the door seals for better sound isolation like on the BMW 850i. As for the rear side quarter windows, they were smaller than any previous 2+2, giving the 456 GT a sexy two-seater look with its fastback rear window. This

combined with a gentle rounded rear-end, featuring two sets of two round lights meshed into one another, had a fantastic “Daytona” quality to it. Placed between the taillights is a chrome prancing horse reinforcing the 456’s jewel appearance, especially on a dark metallic blue model. The four exhaust pipes signature were enveloped in the rear bumper, which had in between them a variable automatic rear diffuser wing. This rear wing worked with the undertray venturi for maximum downforce according to the car’s speed. 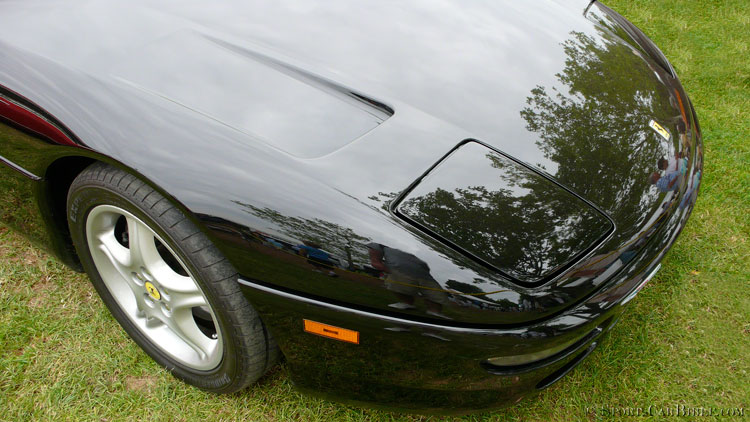 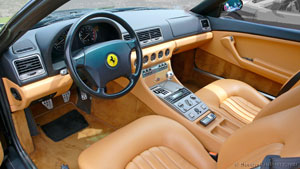 The interior also was a masterpiece, with leather and thick carpeting just about everywhere. First introduced in Europe, with a beautiful 3 branch polished metal steering wheel without air-bag, the 456 quickly became a 2 front air bag car with the adoption of a new four branch steering wheel. To elevate the dashboard’s look, superb chromed bezel dials gave the 456 interior a new retro lustful appeal not seen on a Ferrari since the discovery of Fiat’s parts bin. The real joy though were the five small horizontal gauges on the center console mimicking the interior of the gorgeous 1958 California Spyder. Also on the tunnel console was a plastic panel made to look like brushed aluminum. It housed the exposed six-speed metal gear lever gate, where the all metal lever and gear knob 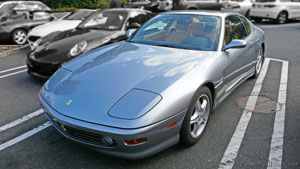 stuck out. Still on the “faux” aluminum panel piece was an integrated Sony/Ferrari radio with AC/heater controls placed just underneath. The two rear bucket seats separated by an armrest were not as spacious as the previous 2+2s. But the 456 GT had the look and feel of a smaller berlinetta, which helped make it the fastest production Ferrari until 1994… I guess you can’t have everything. Finally the introduction of bespoke switches and dials separated this Ferrari from previous 2 cents Fiat parts bin cars… gentleman we have arrived, and it was about time!

In 1996, the four speed automatic Ferrari 456 GTA was introduced, and was a real success with only a small decrease in performance. The 62 mph mark was achieved in 5.6 seconds, while the top speed was marginally lower with 185 mph (298 km/h).

Arriving in 1998, the Ferrari 456M GT/GTA was launched. The “M” stood for “Modificato” (modified), and even if at first glance the changes weren’t that obvious the list was quite extensive. The front bumper was redesigned with a wider grill housing additional driving lights in each corner, which was a design cue taken from the Superamericas, 250 GTEs... With this altered front-end, the turning signals were now repositioned outward. Sadly the hood now made from carbon fiber, didn’t display the air vents seen after the pop-up headlights, which were also redesigned with a more convex shape. Esthetically the rest of the 456 M stayed the same including the 17” five spokes wheel set, but the restyled front-end has been said to have aerodynamically improved the 456 M. 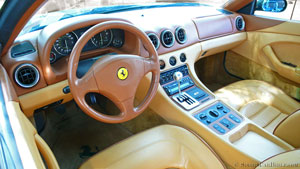 Inside another small revolution happened with a new dashboard and center console. The main binnacle was now bigger with a smaller three branch air bag steering wheel, and all the rectangular air vents were replaced by rounded ones. Although very sadly indeed, the fantastic set of five smaller dials placed on the center console was replaced by a cluster of three dials. And the aluminum looking, but actually plastic tunnel console, was also changed for two black flat surrounding elements. New seats also awaited you, including new rear seats accentuated by a lower center console.

The V12 was identical with the same power output but the firing order was changed for a creamier delivery. On the technical side, the suspensions were also heavily revised with the traction control (ASR), and the rear electric brake corrector (EBD) now acting in unison with the damping system, but the rear variable automatic rear diffuser wing was now fixed.

Production of the Ferrari 456 GT series ended in 2003 after 3289 cars were sold aside from a few special four-door estates and convertibles were made. Today the 456 GT is regarded as one of the most beautiful and classy Ferraris ever produced. And with its building quality, all around visibility, reliability and everyday drivability, it certainly will look good when you arrive at your three star hotel with the optional and purposely fitted Ferrari luggage set in the trunk.