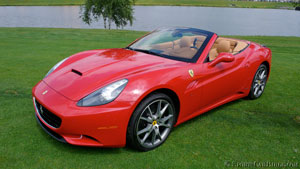 Ferrari introduced in late 2008 a car that nobody expected, another V8 sports car in Ferrari’s lineup, the Ferrari California. This new 2+2 mid-front engine Grand Tourer was not only the first V8 front engine from the most respected Italian car maker, but it also was the first retractable hard-top convertible Ferrari model produced. 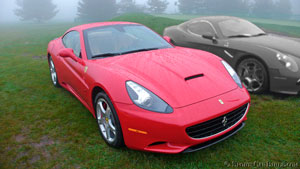 With an all aluminum chassis and body, who’s design was given to Pininfarina, the Ferrari California’s lines were a total departure from the traditional Ferrari look. This was to express the softer side of this Italian machine, a deliberate choice from Ferrari who wanted to gain a broader customer base including women increasingly attracted by the prancing horse badge. Sadly the California’s design went a little too far out of its way, with an extended nose adorning a silly grin on its egg crate grill giving the California a “catfish” appearance.

The hood had a central air scoop, but the disappointing fictitious two slatted air vent on each side of the front fenders should never have left Pininfarina’s design studio. The “faux” air vents gave way to a very odd depressed belt line rising toward the end of the door onto the top rear fender. A lower air intake placed on the doorsills gave symmetry to the belt line and looked the part, but moving to the rear was another design nightmare. The rear-end was chunky at best, and was accentuated by a single, semi-encased round tail light on each side that just looked well… too Japanese for such an Italian icon. As for the exhaust pipes, a new form of quad-pipe layout now being stacked up diagonally reminded you of a Lexus IS-F… Ouch! In between the tail lights, and exhaust pipes was a black horizontal panel (optional carbon fiber) where the license plate was fitted, 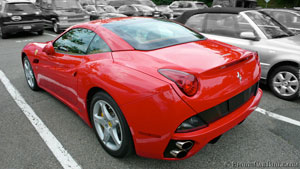 with at each extremity a second tail light element including the reverse light disguised by a smoked clear finish. All the way at the bottom, a rear diffuser was fitted to create 154 lbs (70 kg) of downforce at 124 mph (200 km/h) and was as real as the front side vents were fake. The California wasn’t an all out right ugly duckling, but it is just too bad that its best profile could only be seen when the elongated and rakish hard top with its fastback rear window was raised-up. The Ferrari California had a 340 liter (12 cu ft) trunk cargo space reduced to a still very decent 240 liter cargo (8.48 cu ft) space once the 14 second folding roof panel ballet ended. 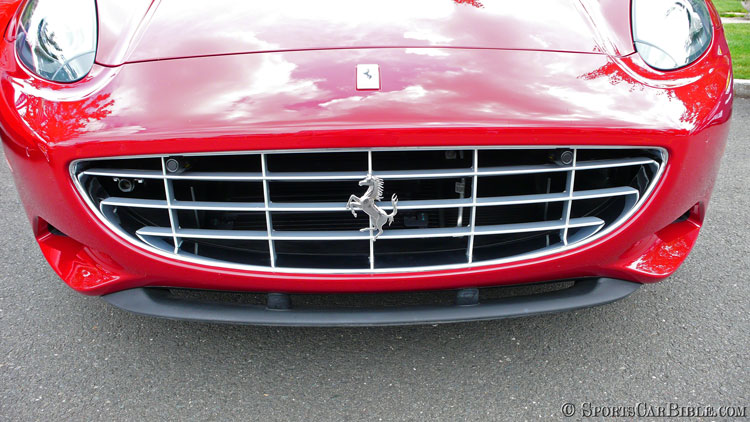 Inside the fit and finish was finally up to this century standards, and was maybe the most elegant interior offered by Maranello at the time including the 612 Scaglietti. The dashboard had a three visor binnacle with a mix of analogue and digital gauges. 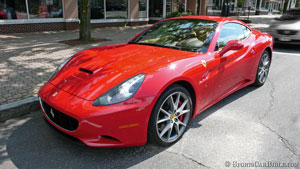 The four protuberant interior air vents fit the cabin nicely unlike those found on the 599 Fiorano, but the center dash navigation system came straight from the Chrysler 300 with underneath it the heat/AC controls unit. The tunnel console was composed of a bone like aluminum ramp where the launch control, reverse and auto buttons were located as well as the door locks and electric window buttons. 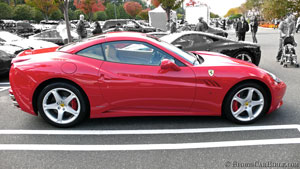 The two bucket seats were electrically adjustable and the standard six speed manual transmission was a very rare sight. Instead most of the buyers opted for the seven speed dual-clutch F1 transmission, which was a first on a Ferrari and was very smooth to operate with its paddle shifters behind the flat bottom, all electrically adjustable, steering wheel. When the F1 transmission was ordered you could purchase the optional LED light markers at the top of the steering wheel, here to remind you when to upshift, excepted in the default mode, which was the automatic setting. 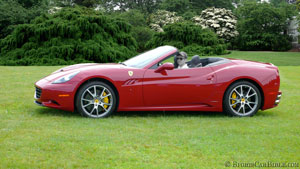 Also on the steering wheel was the start button and a three position “Manettino” switch also used in F1 and allowing you on the California to select between “Comfort”, “Sport” and “Traction Control Off” (CST). At the rear was enough space to fit two children if the two optional rear bucket seats were specified, if not ordered, a series of leather straps were here to hold your precious belongings. If your cargo was too big they could be stored half way in the trunk by lowering the fold down backrest seats, where two pop up roll bars were hidden in case of rollover. 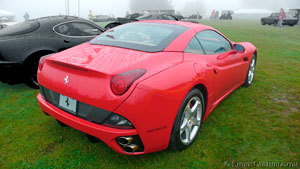 The engine was mid-front mounted, as in the true four seater 612 Scaglietti, giving, along with the rear transaxle transmission, a good 47/53 front to rear weight distribution. The 4.3 liter (262 cu in), flat crankshaft V8, with direct petrol injection (DPI) produced 460 ps/454 hp at 7750 rpm. To stop this stallion, powerful carbon ceramic brakes were fitted as standard. Performance was very impressive though for a car weighing more than a 599 Fiorano, with only 4 seconds to reach 62 mph 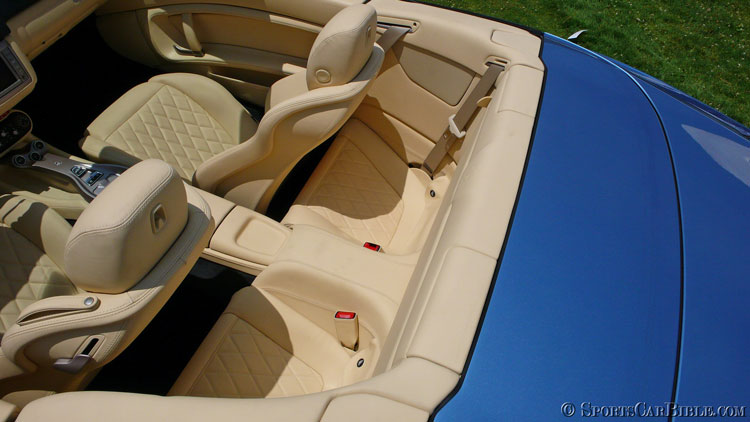 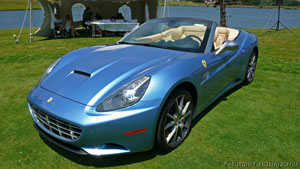 But the most important factor for these impressive numbers was obtained by its new 7-speed transmission, which only took 70 milliseconds to upshift against the “standard” F430’s 150 millisecond gear changes. At the end of the day though, power is nothing without traction, and the California was loaded with driver’s aids like traction control (CST) and F1-Trac. When these systems were combined they gave the driver confidence to lay more power down the road on twisty tarmac by monitoring and taking data from sensors. This allowed the computer to play with the throttle response, and the new multi-link rear suspension. Finally, the magnetorheological dampers (SCM) fitted on all corners were filled with ion fluid, which instantaneously reacted to an electrical current, and changed the viscosity, thus the dampers stiffness, at the touch of the Manettino. 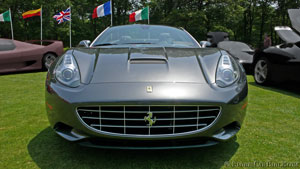 In March 2012 at the Geneva Motor Show, a revised Ferrari California made its debut as a 2013 model. The 2013 “California 30” went on a diet at the Scaglietti factory and lost 30 kg (66 lb) of its aluminium structure without losing rigidity. Combined with a rise in horsepower the California now produced around 30 more horsepower over the first series for a now total of 490 ps/482 hp at the same 7750 rpm. The torque also increased from 357 to 372 lb-ft at the same 5000 rpm, making it now possible to sprint to 62 mph in 3.8 seconds! This gain of power had been made possible by fitting a new exhaust manifold and the remapping of 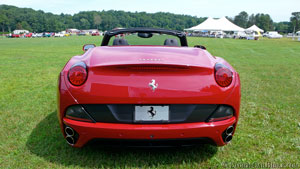 the ECU (engine computer). At last but not least, the option list now included a “Handling Speciale” package. This new Handling Speciale pack recalibrated the magnetorheological dampers (SCM) for a 50% faster reaction time and were matted to 50% stiffer springs at the front and 11% at the back, the steering was also upgraded to be 10% quicker. This updated California and optional Handling Speciale package substantially changed the California’s aptitude to be more of a dynamic car without taking away its Grand Tourer character. The California “HS” can be identified by a silver grill and side front fender faux-vents. 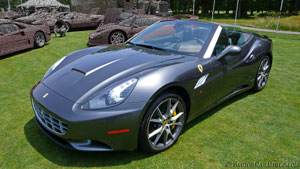 For your eyes only was an array of new colors including a dual tone paint scheme and a revival on classical paint shades. Aside from its awkward looks, the Ferrari California was an excellent all around everyday Grand Touring Coupe/Convertible, with plenty of space for your “Champs-Elysées” shopping, that included loads of get-up and go! 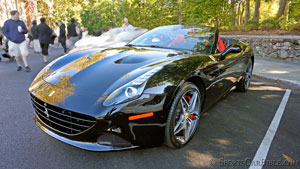 In February 2014 a completely revised California, now answering to the name of “California T”, was introduced ahead of the Geneva motor show held in March. The “T” stands for “Turbo” and is the latest turbocharged Ferrari since the 1987 Ferrari F40. The California T has all new body panels aside from the roof panel, still retractable in 14 sec, making this redesign more than welcome.

The California's “village idiot” smiley front grill, which never should have been designed in the first place, is now adopting a more chiseled and aggressive lower line including larger air intakes on each side of it. The headlights too are more masculine and linear, and the “Scaglietti” hood air-scoop also has been replaced by 2 vents reminding you of the Daytona’s hood vents design. The California's faux air-scoop on the front fender lost their little slats but most importantly they are now accentuated as the doorsills aero-wings. As well as the front-end, the back-end also is a success with a more aggressive, three slatted rear diffuser and rear brake air-vents depressed on the rear side bumper as seen on the FF. But most important are the new quad-exhaust pipes, which happily regain a more traditional horizontal layout. 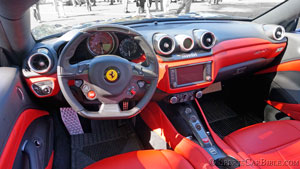 Inside the California T nothing major seems to be different aside from an overall improved fit and finish. However at a closer look pretty much everything from the thinner binnacle, for better outside visibility, to a bigger 6.5 inch touchscreen navigation system (infotainment) has been revised. Even a pinch of extra room for the back seats now allows you to “pack” up to 2 kids of a maximum of 8 ½ years old instead of 8 but is still welcome anyway. Still at the back and to top it all a very convenient little rear door latch now allows you to fit bulky items like the stereotypical golf bag. As highlighted by Ferrari, a gimmicky round touchscreen turbo gauge located between the 2 central air-vents on the dash that Ferrari calls the TPE or “Turbo Performance Engineer” gets car geeks curious. 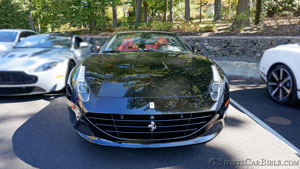 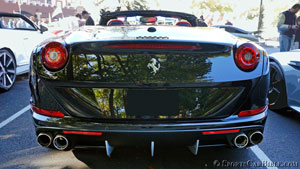 The California T's directly injected twin-turbo V8 was adopted this time around for economical and ecological reasons instead of seeking pure power delivery, and it delivered on its promises with 15% less gas consumption and 20% less CO2 emission. To try to preserve the purity and responsiveness of an atmospheric engine Ferrari uses 2 low inertia turbos (1/ bank) and with Variable boost Management Ferrari claimed to have a more natural feel when powering up then its competitors with only 1 second delay to reach full boost. Due to the turbos acting as a muffler, Ferrari wanted to retain some powerful vocal characteristics and left the V8 with a flat-plane crankshaft, three piece exhaust manifold and turbo housing. With the help of 2 turbos the California T’s V8 went from a 4.3 liter (262 cu in) to a 3.85 liter (235 cu in) and still gained 70 horses with now 560 ps/552 hp at 7500 rpm. But the torque figure rose from 372 lb ft at 5000 rpm to 557 lb ft at 4750 rpm thus 49% more torque but in 7th gear only. The faster twin clutch 7 speed transmission is beefed-up to deal with the extra power, has a longer legged 7th gear but Ferrari restricts the California T’s torque delivery in lower gears supposedly to keep a normally aspirated feel. Still, with this extra power/torque the 0-62 time comes in a seriously quick 3.6 seconds while the top speed is 196 mph (315 km/h). 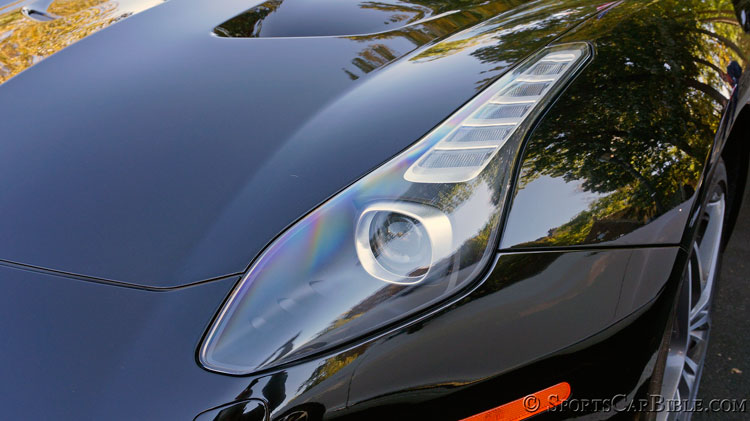 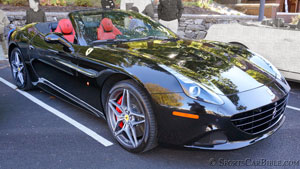 To stop the California T, Ferrari fitted this sun seeker with the latest CCM3 carbon ceramic brakes, now giving you an eye popping 60 mph to 0 in 34 m /112 ft. Now to keep you on the road Ferrari uses ESP 8 which when combined with the F1-trac makes you corner at a supposedly noticeable 8.5% faster according to Ferrari. As for the ride, it is Transformed, which maybe what the “T” should stands for. The suspensions and their magnetorheological dampers (SCM) now reacts 50% faster and are 12% stiffer finally giving the Ferrari California T composure and handling, which was missing on the original California.

Aside from its initial awkward looks, the original Ferrari California finally traded its ugly duck looks for a pair of turbos and became more than just a fast cruiser but an excellent all around everyday Grand Touring Coupe/Convertible, with plenty of space for your “Champs-Elysées” shopping, that included loads of get-up and go and zig-zag abilities!