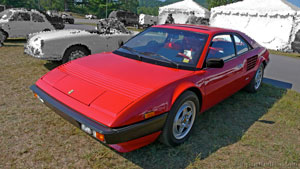 Here is the true descendent of the Ferrari 308 GT4, the 1980 Ferrari Mondial 8. The “Mondial” name was taken from Ferrari’s 50’s four cylinder open racer barchettas, and it also brought back Pininfarina after Bertone’s design on the 308 GT4. But as Bertone, Pininfarina would also have trouble to harmoniously clothe this new mid-rear engine 2+2 sports car. 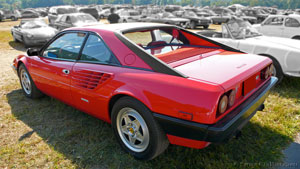 The 2650 mm (104.3 in) tubular wheelbase chassis was based on the 308 GT4, and equipped with ventilated brakes and all around independent suspension. The Mondial’s design and demeanor was deliberately understated to not give too much emphasis to the long three quarter rear side window, and equally long rear quarter panel extension between the door and rear axle. The clever and often criticized large rear side air intakes with their horizontal slats were used to cool the engine. Painted black at first, but later on body color painted, these large intakes were not only needed to cool the engine but also to visually fill the rear side panels. This 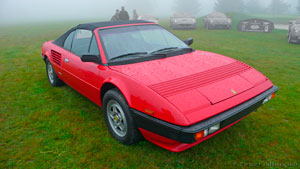 smart air intake ended in a point, mimicking the angle of the rear quarter window. This visual trick led to unveil an arrow shape like design between the rear side window and intake, prompting the eye to move toward the back. With its air channeling slats it also gave a taste of what was to come with the future Testarossas, but that’s another story. The front and rear had a massive wrap around black bumper with turning signals and auxiliary lights encased on it. The pop-up headlights housed two round lights on each side, and a wide air louvered vent, taking the whole hood’s width, was placed just above them. This reminded you of

the 1974 Maserati Khamsin designed by… Bertone!? The roofline remained long to accommodate two adults at the back including their heads, and for the first time on a Ferrari a sunroof was available on the option list. The black edged rear flying buttresses received a slanted rear window, while the engine bay lid was all-louvered. Two trunk lids could be seen at the back with, the louvered one for engine access and another smaller one by the tail lights for cargo space. As usual for the period, five-spoke alloy wheels and the quad-exhaust pipes gave the Mondial its Ferrari trademark.

Inside, the dashboard binnacle was cubical at best and again resembled something that Bertone would have done as he did in the Lamborghini Countach introduced in 1974. So maybe Bertone’s work on the 308 GT4 inspired Pininfarina for the Mondial, or at least this was the impression felt behind the wheel with all six dials housed inside the big rectangular dash. Located on the two level tunnel console was the metal exposed five speed dog leg (1st bottom left) gear lever gate. Underneath the 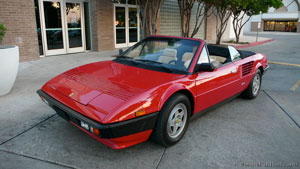 gate different switches for the windows, the ashtray, AC and a radio could be found. But it is the interior monitor control panel unit on the lower section of the tunnel console, which provided the driver with information regarding the Mondial mechanical status that gave the Ferrari Mondial’s interior a unique character. The rear seats were just big enough for two Italian size adults with a central armrest, while the fold down backrest seats could transform the rear into a second cargo space. 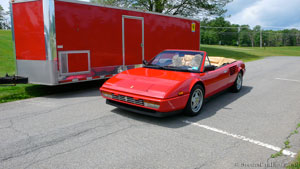 The engine was transversally placed in front of the rear axle to maximize interior space and minimize the Mondial’s overall length already significant for a sports car. With the 3 liter (178 cu in) 90˚ dual-cam, 2 valves per cylinder V8 from the 308 series, the Mondial developed after being choked up by emission artifacts, and its early injection system only 214 hp at 6600 rpm for the European market and a sad 205 hp at the same rpm for the American models. It took 8 and 9 seconds respectively for the Ferrari Mondial to reach 60 mph depending on the market, while the top speed was 143 mph (230 km/h). 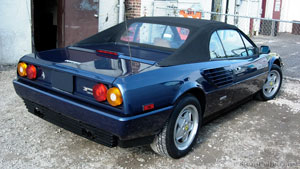 Something had to be done in terms of power output and in 1982 the Ferrari Mondial QV (Quattrovalvole/four valves per cylinder) was introduced at the same time as its gorgeous 308 QV GTB/GTS two-seater sibling. The power grew to 240 hp at 7000 rpm for the European models and 230 hp at 6800 rpm for the US cars, re-injecting some panache to the Ferrari badge. A revised central tunnel console now housed the radio at the top of the console, and on the lower section the gated gear lever, AC/heat and window switches with the monitor control panel.

In 1983 the first Ferrari Convertible since the Daytona was unveiled. Simply named the Mondial Cabriolet, it had slightly smaller rear seats than the ones found on the coupe, but the soft-top lines remained closed to the coupe with an extended rear fabric mimicking the coupe’s rear buttresses. Performance was on the rise with a decent 6.8 and 7 seconds to reach 60 mph, while the top speed improved to 150 mph (241 km/h). 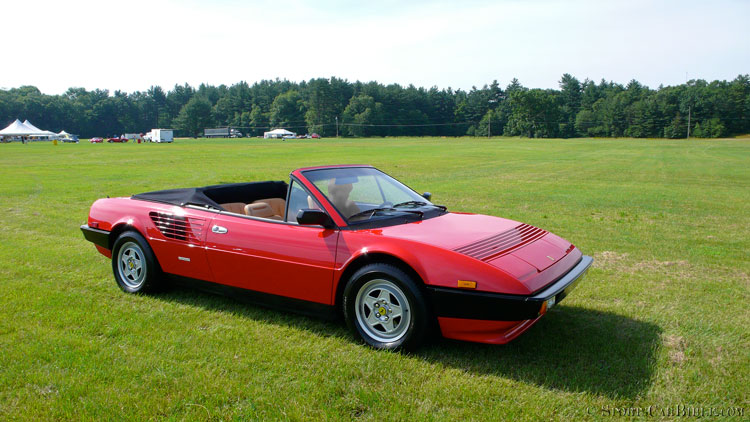 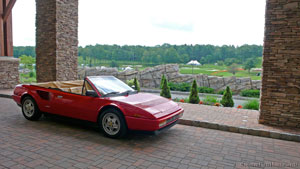 In 1985 the Ferrari Mondial 3.2 replaced the QV. It had the 328 GTB/GTS series 3.2 liter (194 cu in) V8 with 270 hp at 7000 rpm for Europe and 260 hp at 6800 rpm for the United States. The Mondial was finally updated with new convex five-spoke alloy wheels later on found on the 1989 Ferrari 328 ABS cars. The body color coded front and rear bumpers were well received and the lower front and rear valance with the doorsills were now painted black. At the front, the 328’s grill, turning signals, and parking lights were used to revive the Mondial’s appearance, while US models shaded their four side fender light markers for the thinner European rectangular front side fender turning signals. Inside, the rectangular dashboard binnacle got its top edges chiseled, smoothing its brick like looks, while the white numbering changed to orange. New interior door panels were also part of the Mondial 3.2 updates, with ABS as standard for 1988. As for the performance side of things the Mondial 3.2 achieved the 0-60 mph time in 6 seconds with a 156 mph (251 km/h) top speed. 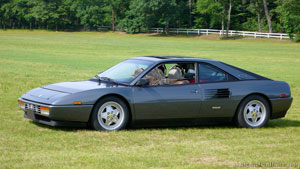 In 1989 the last and most radical evolution arrived with the introduction of the Mondial T. On the outside only the shortened and now straight rear side air intakes on a rounder wing were your biggest clue to identify the Mondial T. For the initiated, a new pair of painted door handles replaced the older units, and rectangular headlamp elements from the 348, also replaced the two round lamps on the pop-up headlight frames. Inside changes went even further with a new and rounder binnacle, and a never seen central console now linked to the middle of the dash. The interior door panels were again updated and newly designed seats were fitted.

The biggest transformation came from the engine and gearbox layout. The engine was now positioned longitudinally instead of transversally with the transmission placed transversally, forming a “T” with the engine. The dry sump 90˚ V8 was now the 3.4 liter (208 cu in) 32 valve found on the Ferrari 348. Giving 300 hp at 7200 rpm, the 3.4 liter V8 hustled things around with a new 60 mph time of 5.6 seconds, as for the new top speed it was of a respectable 158 mph (255 km/h). 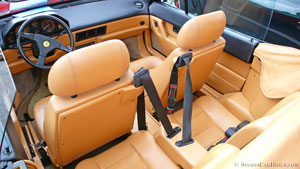 The Mondial T wasn’t just a fast sports car, it was also easier to drive in town with power steering now as standard. Also to improve the ride quality the Mondial T had an electronically managed damping system with three settings giving it a soft to hard ride at the touch of a button located on the center console. For dessert a new and optional automatic transmission developed by the French company Valeo, acted as a normal manual transmission, just without the clutch pedal. This last one was 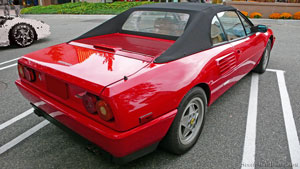 automatically activated by a series of sensors on the shifter and gas pedal allowing the driver to still manually shift on the exposed metal gate in 0.1 second.

In thirteen years of production only 6124 Ferrari Mondials were built, most of them in Cabriolet form, making the Mondial the last “affordable” Ferrari 2+2 and when you stop and look at it…well you’ll find that all along it is still a beautiful prancing horse. 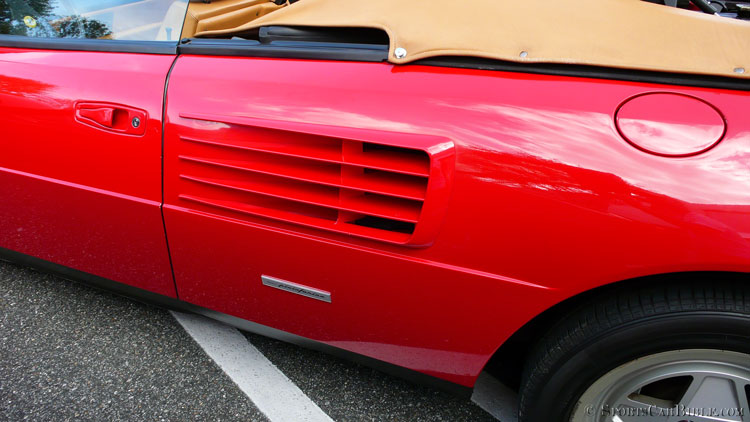