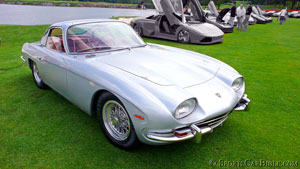 Ferrucio Lamborghini was a successful businessman who made his fortune building tractors for farm use and heating systems. He owned a few Ferraris and as the story goes was not happy with his breaking down too often for his liking. Apparently, it was a clutch problem that didn’t seem to bother Enzo much when Ferrucio confronted him about this constant issue. After a little feud, Enzo told Ferrucio that he should stick with tractor manufacturing and on this note Ferrucio Lamborghini went on to build his own sports car company, and set his sights on building a better engineered sports car… thank heaven for that little ego trip! 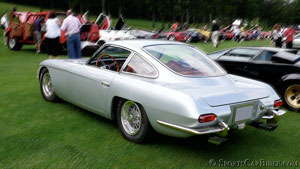 In May 1963, Automobili Lamborghini S.p.A was founded in Sant’Agata Bolognese and that same year a prototype was built by coachbuilder Sargiotto based on a Franco Scaglione design (ex-Bertone). Engineers Paolo Stanzani and Giampaolo Dallara had been recruited from Ferrari after the 1961 Ferrari’s “Palace Revolt” or “Great Walkout” as well as master engineer Giotto Bizzarini who developed the Ferrari 250 series up to the 250 GTO. Bizzarini was asked to develop the first Lamborghini V12 through his company “Societa Autostar” who had just left ATS after Carlo Chiti got his way with building

a V8 for the ATS 2500 instead of Bizzarini’s V12 project. Consequently Bizzarini’s 3.5 liter (213 cu. in.) V12 racing engine with 360 bhp at 8000 rpm got retained by Lamborghini, but it would need to be detuned to be street usable. At the same time the original Franco Scaglione 350 GTV “naïve” design would also have to be revised to appeal to an high-end and demanding clientele. So after massive revisions the first Lamborghini production car rolls out of Lamborghini’s factory in Sant’ Agata in March 1964 as the Lamborghini 350 GT. 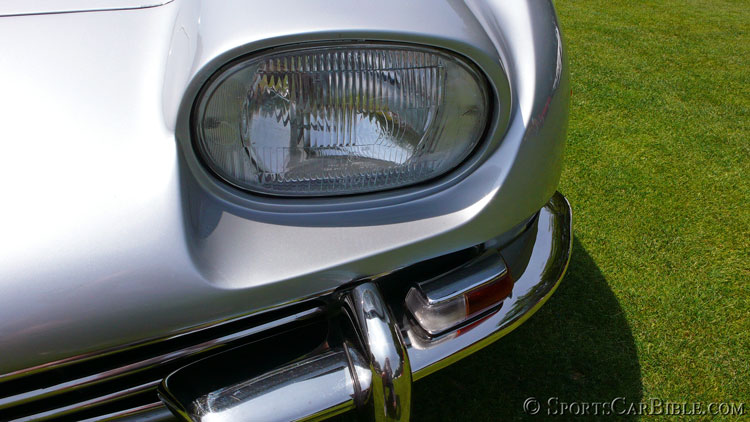 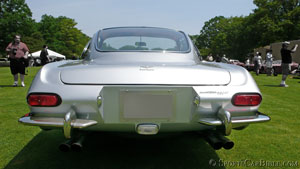 Redesigned and built by Touring with its “Superleggera” technique consisting of laying aluminum panels over a thin tubular structure to minimize weight. The production 350 GT shed its pop up headlights for a pair of oval lamps encased in protuberant curved fenders due to the low hood line allowed by the use of side-draught carburetors. The windshield adorned a single wiper and was slightly panoramic with arched posts. The rear quarter windows and rear window were generous with thin pillars all around giving the 350 GT a fantastic all around visibility.

The rear fenders just had a thin raised longitudinal edge matching the pattern on the front fenders. The flat trunk lid and rear window layout was reminiscent of the Aston Martin DB4/5/6, also created by Touring and much loved by Ferrucio Lamborghini. To finish with Lamborghini’s first newborn the rear split bumper also followed the front bumper design, and in perfect Italian fashion four exhaust pipes and a set of Borrani wire wheels were adopted and gave the 350 GT a nice classic look especially with the rear squared-off wheel arches. 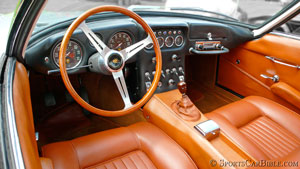 With its long doors, entering the 350 GT wasn’t a problem, and once inside leather was found everywhere including on the dashboard. Two big Jaeger dials were placed behind a three branch wooden Nardi steering wheel with a small pressure oil gauge in the middle. The center console also received four smaller dials and all were surrounded by chrome bezel as well. Still on the center console was a cluster of light and toggle switches with no markings adding to the clean interior layout, while details such as elegantly shaped door handles and other finishing touches set Lamborghini apart from Ferrari. Interestingly enough the prototype GTV had a third rear middle single seat right behind the front seats, which made it into the very few first production 350 GTs only. 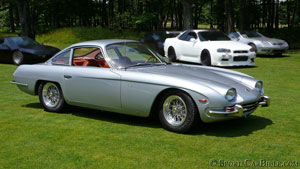 Dallara was responsible for detuning the four-cam, 3.5 liter V12 engine by slightly reducing it from 213 cu in to 211, lowering the compression, and by doing without the GTV’s dry-sump. It was then fitted with six side-draught Weber carburetors and produced 280 bhp at 6500 rpm through a five speed ZF gearbox while Ferrari used a four speed unit on its models at the time. Also the all independent wishbone suspensions were a modern departure, 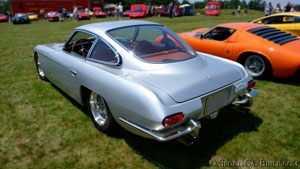 and again this gave the 350 GT an edge over Ferraris by having a better handling and controlled smooth ride over poor road surfaces. For stopping power Lamborghini also was once more ahead of Ferrari by using Girling disc brakes all around making Ferrucio’s first creation a well thought out mature masterpiece. Performance was of the first order with 6.7 seconds to reach 60 mph from a standstill while the top speed was 155 mph (250 km/h). 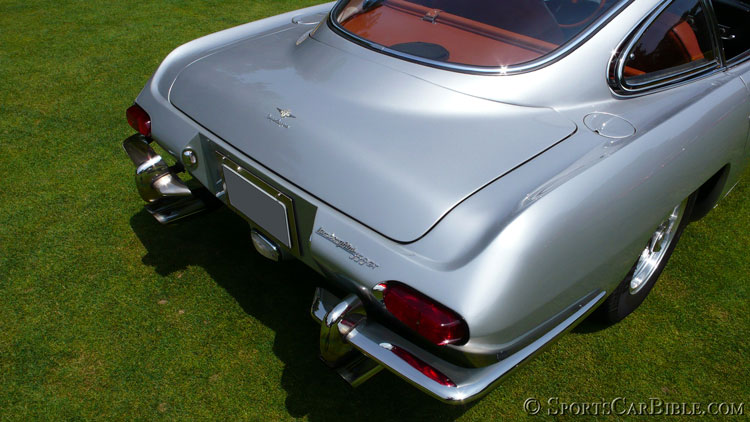 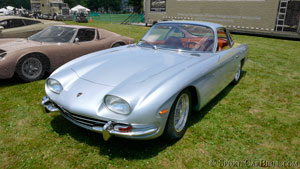 In 1965 an interim model, here to bring the gap between the upcoming 400 GT 2+2 was introduced. Simply known as the 400 GT, this model had a larger 4 liter (240 cu in) V12 with 320 hp at 6500 rpm with some models featuring oval headlights or the upcoming twin round headlights surrounded by a heavy chrome trim on each side. Out of only twenty three 400 GTs built only three were built using Touring’s “Superleggera” technique while the rest started the steel construction that would follow on future Lamborghini models. Ferrucio Lamborghini’s first exotic sports car was a great success even if the general design can look odd at times with those overexposed headlights due to its low hood line, but the 350 GT is still quite harmonious and flows nicely with the compact size of its rounded curved body.

Only 120 Lamborghini 350 GTs have been built between 1964 and 1966, while another 23 interim 400 GTs were built in 1965-66. Out of these numbers two chassis were sent to Zagato in 1965 to create the 3500 GTZ and 4000 GTZ, that same year two more chassis were built as a spider (cabriolet) under the name 350 GTS, but as the GTZ, the GTS never made it into production. Unlike later on, testosterone and ego-driven mid-engine boy toys, the 350 and 400 series were mature and civilized sports cars with a certain practicality and common sense dictated by the need for achieving greatness, a philosophy that wouldn’t last long in Sant’Agata.