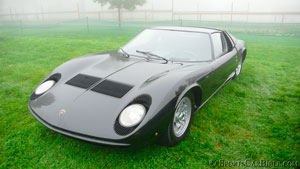 Named after a famous breed of fighting bull, the Lamborghini Miura was born as a semi-monocoque rolling chassis and presented as such at the 1965 Turin Auto Show. The Body hadn’t been designed yet, and to top it off this World introduction was the result of a side project engineered by Giampaolo Dallara, Paolo Stanzani, Bob Wallace and four more developers/engineers working after hours for fun. 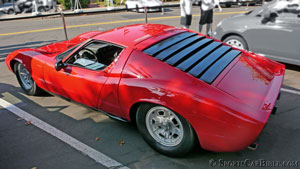 The outcome was sensational none the less, and for the very good reason that the chassis presented featured a transversely placed mid-rear engine and transmission. This rear engine layout had been seen on the racing circuits before and introduced for the first time on a little French car in 1962 named the René Bonnet D’jet. 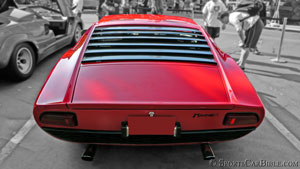 As avant-gardiste as the DB D’Jet was, it did not have the international exotic presence that a Lamborghini could gather. This concept was still very radical in 1965 and customers placed orders without knowing what robe would clothe the next raging bull. 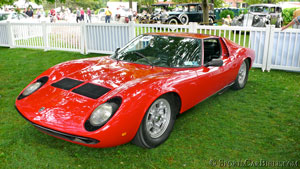 The Idea for the car’s layout was taken from the Ford GT 40 and Ferrari 250 LM, which were pure racers. Even if you could legally drive a 250 LM on the street in 1964 they more qualified as prototype racers than production street cars, and the same could be said for the Ford GT 40. But it also seems that everybody forgot about the 1964 De Tomaso Vallelunga and even more so the Italian short lived 1963 ATS 2500, also engineered by Ferrari’s ex-master heads, who were fired or left Ferrari in 1961 on the “Great Walkout” day. 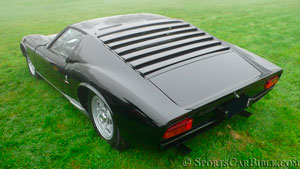 A transversally placed engine had been seen on the iconic Austin Mini, and with this layout it gave the Miura a more compact rear design with all the masses in front of the rear axle. A very young Marcello Gandini at 22 years of age, then part of the Bertone’s team designed the Miura, and in 1966 it was ready to be shown at the Geneva Auto Show. The Miura's lines were very fluid and very low, this was a strict two seater with tones of sex appeal, a real show-stopper that Ferrucio needed now if he wanted to upstage Enzo. 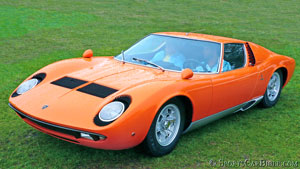 The Miura's uncovered pop-up headlights like on the later Porsche 928s were electrically operated and had “eyelashes” at the top and bottom edges. In between the headlights were two large blacked-out rectangular radiator air vents, while an elegantly shaped air scoop on the doorsills cooled the rear compartment. The Miura's windshield was rakish at best and the doors adorned what looked like to be the rear pillar with its slatted air intake entrance housing the door handles. 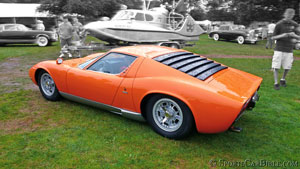 But once both doors were open you realized that bull’s horns seemed to appear while looking at the Miura straight on. The single piece rear panel was as sensually wavy as the front-end and opened in a clamshell fashion. The Miura's engine was covered by a series of blacked-out open slats instead of a glass window to allow hot air from the engine bay to exit. To finish it all the five hole Campagnolo magnesium wheel set looked beautifully aggressive and were fitted with the new Pirelli Cinturato High Speed tires. 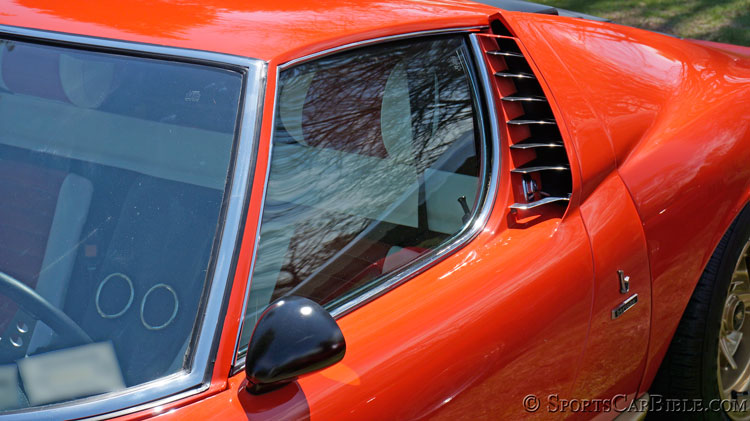 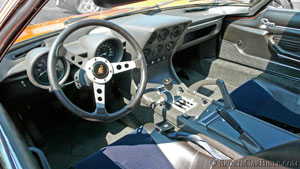 The Dashboard was exotic at best, with a center console reminding you of a helicopter cockpit with its concave design and dual three gauges row. In front of the driver were two large Jaeger dials encased in there own pods and making you instantly feel that you were in something really special with the speedometer marking 200 mph (320 km/h) and a rev-counter displaying 10 000 rpm. 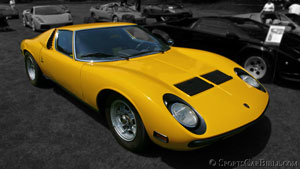 There were three Miura generations, all with a 4 liter (240 cu in) quad-cam V12, the same as the previous Lamborghini models but this time with four down-drought triple choke Weber carburetors, and a 5 speed Lamborghini transmission. The first Miura appeared in 1966 and was also named P400 (P for Posteriore/Rear). It was rated at 350 hp at 7000 rpm and was good for 163 mph (262 km/h) 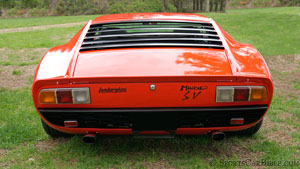 unlike the claimed 180 mph/290 km/h… I caught a fish that big, while the 0-62 mph time was done in 6.2 seconds. To give you a better perspective of the Lamborghini/Ferrari duel, Ferrari was offering at the same time the beautifully elegant 275 GTB with a front V12 engine of 3.3L (200 cu. in.) and 260 hp in its 3 carburetors and 2 camshafts base form. A one-off Miura P400 Roadster was produced in 1968 with a “Targa” type roof, but this last one never made it into production. 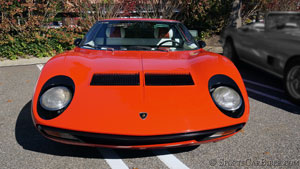 Also in 1969 the Miura became the Miura S (Spinto) or Miura P400 S and was the first Miura to be available on US soil. The V12 now produced 370 hp at 7700 rpm, after the combustion chamber and camshafts were tweaked for a new top speed of 168 mph (270 km/h) and a new 0-62 mph time of 5.5 seconds. But more importantly a thicker steel chassis of 1 mm instead of the previous 0.9 mm eliminated the over flexing tendencies of the first Miura’s chassis. The rear suspension was revised to reduce rear squat and larger tires were found on the “S” model as well as an improved braking system. As for the outside chrome accents found their ways around the headlights and windows. 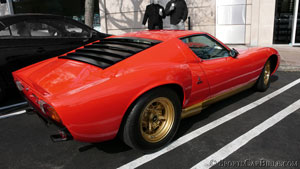 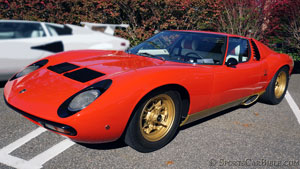 Also the Miura SV was equipped with two oil reservoirs, one for the engine, and one for the transmission unlike the previous Miura's, which shared the same oil sump. Gone also were the eyelashes around the headlights and the front grill was reworked as well. But more noticeable was the Miura's wider rear body here to accommodate bigger wheels, while a gold magnesium set was available. Harder to notice though was the lower stance of the front-end made possible by revising and lowering the front suspensions. This alteration was needed to counteract the dangerous front-end lift effect occurring at high speed.

Aside from the three main Miura series, 9 special cars were produced. The 1970 Miura Jota with 440 hp built as a street racer for Lamborghini’s test driver, Bob Wallace. Five Special Miura SVJ (Jota style) were built with 420 hp between 1973 and 1975 plus another one in the 80’s for one of the Mimran brother, which all had like the Jota, some racing body features. Also the one-off 1968 Roadster made by Bertone as mentioned previously, and the last one-off Miura was again done in the 80’s by the Mimran brothers as a SVJ Spyder. 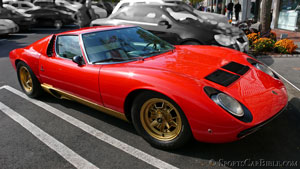 As one of the first mid-rear engine layouts, the Miura didn’t come quite together; the main issue remained that the Miura’s shape promoted front-end lift at speed. A bad behavior accentuated by the fuel tank located at the front and becoming lighter as the local’s wide open mouths went by. The second major problem was that the down-drought carburetors could leak fuel and simply start a fire making your day a not so lucky one. Ferrari waited until 1971 to offer their first V12, mid-rear mounted engine production car, which today makes the Lamborghini Miura with its fabulous curves, engine layout and power, the first popular sports car called, “Supercar”.