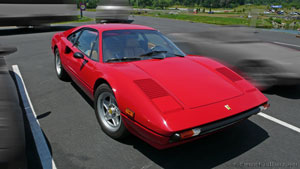 Bertone’s four seater 308 GT4 wasn’t selling as Ferrari had hoped, and Enzo realized that he needed a more popular two seater Berlinetta sports car to sell alongside the 308 GT4 2+2. So Enzo went back to Pininfarina, with Leonardo Fioravanti (Mr. Daytona) at the head of Design, and asked him to create a new two-seater, mid-rear V8 engine car, to replace the successful 206/246 Dino series. In 1975 the Ferrari 308 GTB, for Gran Turismo Berlinetta (Grand Tourer Coupe), was introduced and it did just that with great panache. 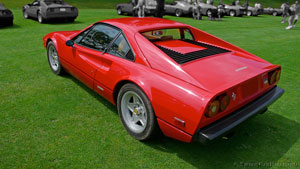 The new 2340 mm (92.1 in) tubular wheelbase chassis used was fitted with independent suspension and ventilated disc brakes all around, with most of the mechanical components coming from the GT4. But more importantly, the design followed some of the existing cues from the 206/246 series making everybody fall head over heels at the 1975 Paris Auto Show. 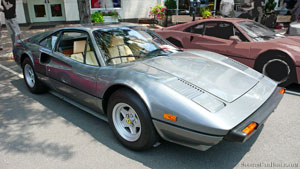 The 308 GTB wasn’t born with the Dino’s badge, but under Ferrari’s own, and unlike any other Ferrari, fiberglass was used for the first time on the body panels aside from the front hood lid. The pop-up headlights were of a single round unit on each side with an 11-louver air vent placed as a headlight extension just above them. The whole front-end was nicely curved, all rendered by the curvaceous front fenders. The nose had a thin black bumper (more protuberant on the US cars) with turning signals and parking lights encased on it. The bumper was just fitted above the front lower grill, and a front spoiler lip could be seen underneath it. The 308 GTB seemed divided in two, as did the 365 BB, by a lower black paint finish under the belt line that could be ordered then, but it is a rare sight today. As in the 206/246 Dino series, a conical shaped air intake starting from the doors and ending on the rear fenders channeled fresh air into the engine bay and was a feast for the eyes. To keep on going with the 206/246 Dino theme, the flying rear buttresses with the rear vertical panoramic window were also a real visual treat. The engine 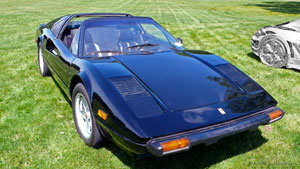 bay lid had two black slatted trapezoidal shaped air vents covering not only the engine but also a zip-up luggage compartment by the tail lights. The rear lid ended up with a rear spoiler lip, while the two round tail light clusters were slightly encased in the tail. Just underneath the lamps was a thin black bumper with reverse lights set in it on European models and included in the turning signal lamps for the US models. The only surprise came from the single exhaust pipe placed on the left side on European models at first, but from the start US 308s had four proper pipes “a la Ferrari”. 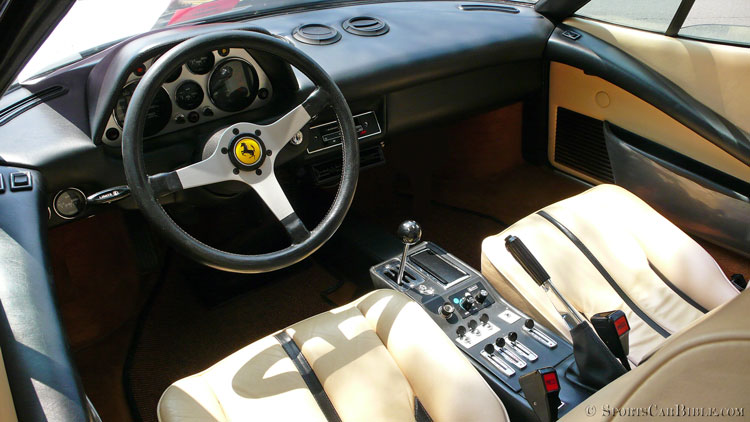 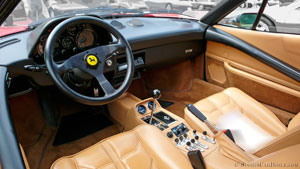 Inside, the tall dashboard binnacle was newly redesigned with an aluminum background piece including two main gauges and three auxiliary gauges at the center. Another pair of gauges, including the clock, was housed on the lower side of the dashboard by the driver's 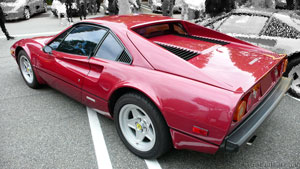 door. Between the seats was a two level center tunnel console housing an open metal gate five-speed dogleg (1st bottom left) transmission gear lever ending by a black bakelite gear knob. On the lower tunnel console section, all the switches and levers for the heat/AC controls, were lodged by the parking brake lever, if that option had been ordered. 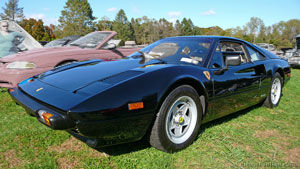 Due to repair problems experienced on damaged cars, the fiberglass body panels on American market 308s were changed to steel panels as soon as 1976. Happily, European cars fallowed in 1977, giving the 308 a less “kit car” like appearance, as well as a better fit and finish. With the steel body came the inclusion of the reverse lights in the center of the outward tail lights on the European models. 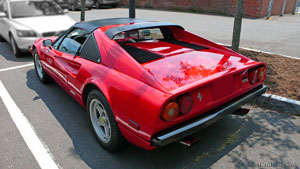 By the end of 1977, the very successful 308 GTS was introduced. The “S” stood for Spider, a term used for the sublime 250 California Spider (Convertible), even if the Ferrari 308 GTS actually was fitted with a black removable “Targa” top that could be stored behind the seats. To strengthen the roof in case of a rollover, a reinforced roll bar was included, and the rear three quarter window now received a fully enclosed black plastic slatted cover that could be opened to clean the window and access the gas filler cap on the left side. 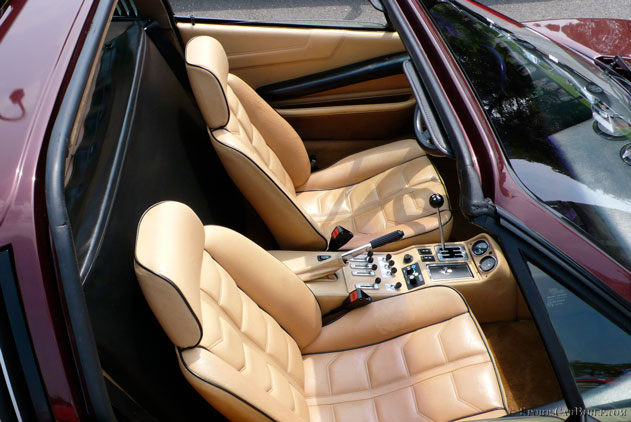 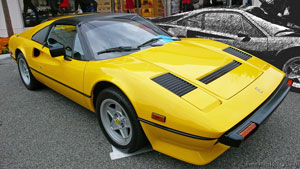 In 1980 the four Weber carburetors were replaced by a Bosch K-Jetronic Injection system, thus giving the name, 308 GTBi and GTSi. Also as in the US market cars now all 308 GTB / GTS received a wet-sump lubrication system. Sadly, aside from being more consistent in its delivery and tune-up, the injection system brought the power down to 214 hp at 6600 rpm, while the US models were at an even more miserably low 205 hp at the same revs. This power restriction added a full second to get to 62 mph from a standstill on all 308s, but happier changes occurred all around this injected 308.

New seats were implemented, now a fully blacked-out steering wheel looked more modern, as well as the black matching binnacle background. The hard to read oil temperature gauge and clock found on the lower side of the dashboard by the door were now moved on the tunnel console above the gear lever. To everybody’s joy an optional 16” five-spoke alloy wheel 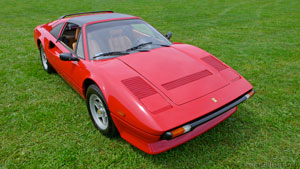 set was available over the standard and puny 14” wheel, refreshing the 308’s look immensely, and 4 exhaust pipes were mow fitted for all markets. Finally, European 308s received the proper and traditional Ferrari four exhaust pipe signature. Now a wet sump already used in the US, Japan and Australia was fitted to all markets, and the newly developed 1st low profile tire by Michelin, the “TRX”, fitted the new optional and larger five-spoke alloy wheels perfectly. This breakthrough rubber gave the driver a better tactile feel and grip than any previous tires used before. 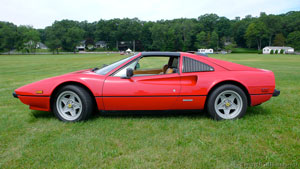 To counteract the loss of power brought by the injection system, Ferrari launched the 308 GTB / GTS QV (Quattrovalvole) in 1982. This appellation stood for 4 valves per cylinder and was the first production Ferrari engine to do so. It allowed for better internal breathing and raised the power to 240 hp at 7000 rpm and 230 hp at 6800 rpm in the US. This did the trick and re-established the performance found on the first carbureted models. As for the GTB / GTS QV, a few cosmetic changes occurred, as found on the front-end with a third wide rectangular slatted air vent on the hood now residing between the pop-up headlamps. A bigger front grill with auxiliary lights, and a deeper front spoiler lip, with new side mirrors were also part of the updated look. But the rectangular side turning signals on the front fender replacing the previous round elements were also an easy giveaway. An interesting option was the introduction of a black rear wing fitted above the rear window, and in 1984 a fully galvanized steel body helped to keep that infamous Italian rust away. 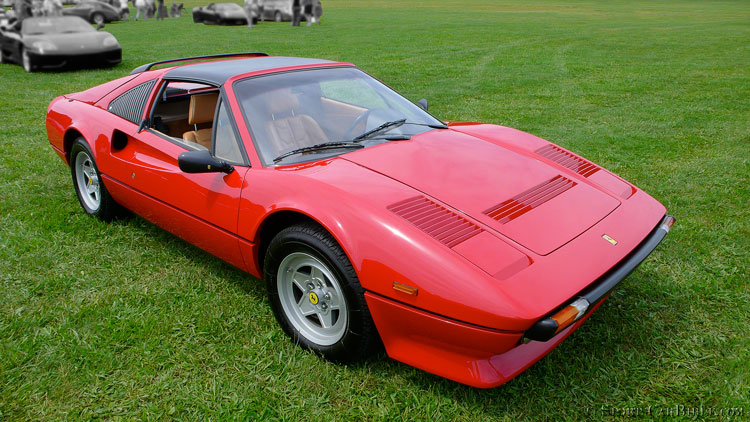 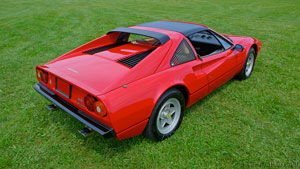 A second and more powerful version of the small 2 liter engine appeared between 1982 and 1985 with the first Ferrari Turbo injected sports car, called the 208 Turbo. With a single KKK Turbo powered engine, Ferrari had 220 hp at 7000 rpm, giving 308 performance figures on the cheap. A 208 Turbo can be identified by its NACA air intake on the lower side panel in front of the rear wheels. Only supplied in GTB (Coupe) form at first, the 208 Turbo was finally available in GTS version by 1983, but production ended in 1985 with 687 Ferrari 208 Turbos sold only in Italy. 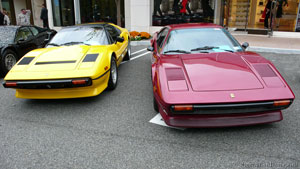 1985 was the last year for the 308 GTB / GTS model, and after a ten year production run it became Ferrari’s bestseller by far with its gorgeous looks, all helped by its "Magnum PI" TV appearances. I always used to say that if the 308 GTB / GTS didn’t exist somebody ought to draw it, and with 12660 units built (mostly GTS) it seemed that I wasn’t the only one thinking so.